Pharmaceutical giant Pfizer attempted to combat COVID misinformation by posting a meme to Twitter, but the results were predictably disastrous. 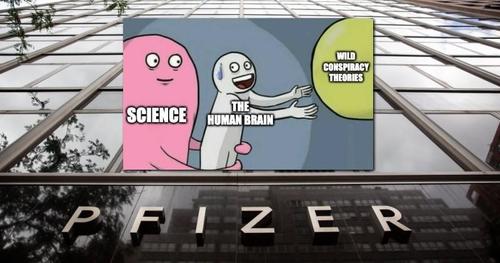 The meme featured a blob labeled “science” holding back another figure to prevent it from embracing a bubble called “wild conspiracy theories.”

“It’s easy to get distracted by misinformation these days, but don’t worry… Science has got your back,” Pfizer’s corporate account tweeted.

Mike Cernovich pointed out that Pfizer hasn’t ‘got the back’ of those who have been injured by their vaccines, since the company has obtained a legal waiver meaning nobody can sue them.

The big pharma drug maker also eliminated the option for anyone to apply to the tweet, which illustrates how much confidence they have about “the science” being open to scrutiny.

“One day #Pfizer will learn that ‘safety’ is not a conspiracy,” commented another respondent.

“Gotta hand it to Pfizer: ‘Science’ sodomizing the human brain is pretty accurate,” remarked another.

Another Twitter user pointed out that in the original meme, the pink character is actually the bad guy.

Several other respondents ‘fixed’ the meme for Pfizer.

Maybe Pfizer should just stick to having their CEO threaten to imprison the company’s critics, another sure-fire way of instilling confidence in “the science.”