Authored by Daniel Yang via The Epoch Times,

Australian truck drivers have blocked a major highway in the north-eastern state of Queensland in a protest against vaccine mandates and tough border restrictions, causing traffic to back up for several kilometres. 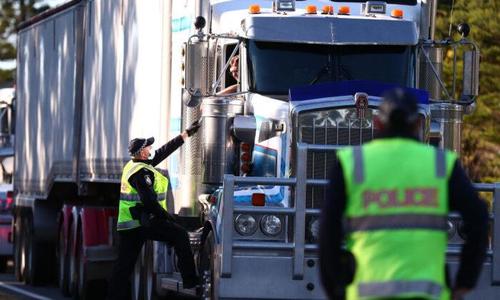 The action marks a series of ongoing protests from Australians frustrated with state government COVID-19 lockdowns and mandated restrictions based on emergency public health orders.

The drivers parked their prime movers at 5:30 a.m. on the southbound lanes of the M1 highway at Reedy Creek in the Gold Coast portion of the arterial on Monday. The highway is used by tens of thousands of Queenslanders each morning.

A banner was unfurled and covered the front of both vehicles, reading: “Truckies Keep Australia Moving, Not Politicians.”

One driver named Brock, who did not give his surname, said the drivers were protesting the Queensland government’s strict health orders that prevented all individuals from entering the state, except for essential workers.

Those deemed essential workers need to be involved in skilled construction, farming, or healthcare, and must prove that a Queensland resident cannot do their job. Further, they need to prove they have received at least one dose of a COVID-19 vaccine. 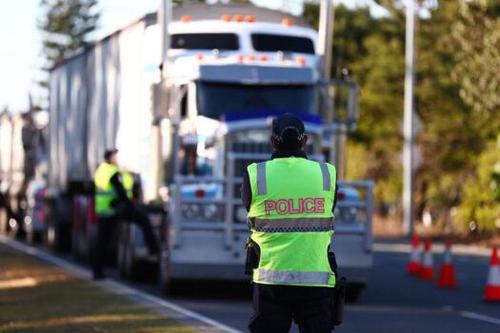 “End all lockdowns, people go back to work, and kids go back to school,” Brock told Nine’s Today show.

“That’s all we want out of it; we’ve had enough of it.

“We’ve had a lot the support mate, the people that showed up today is amazing. We appreciate everyone that’s come down,” he added, saying the police had been lenient about the protest, and he respected what they did.

Wildman said the M1 was blocked for 45 minutes, and emergency vehicles were held up, which was a “great concern.”

“There’s a bigger picture in this around putting lives at risk, which is really, really disappointing,” he told ABC Gold Coast. “We are investigating, and obviously, action will be taken against those particular drivers at a later time.”

The truckers’ rally comes a day before a planned Australia and New Zealand-wide protest on Aug. 31, that has been circulating on social media for weeks.

“Block every hwy [highway] entering into every state all at the same time & take back Australia,” one post on Facebook read, while warning people to stock up on enough food for a couple of weeks while truckies aim to block supply routes across the country.

Frustrations have begun boiling over in Australia over the COVID-19 lockdowns—which state government say are caused by the low vaccinations in the country—with protests against government-mandated lockdowns ramping up around the country in recent weeks.

On the weekend of Aug. 21,  rallies were held in Sydney, Melbourne, Adelaide, Brisbane, Perth, and Coolangatta-Tweed Heads.

“I was working [across the border], and now my source of income has been cut off, so I’m forced to be dependent on the government,” one rallygoer from Pottsville in northern NSW told the ABC.

The Queensland government implemented the hard border in response to an outbreak of the Delta variant of COVID-19 in the Greater Sydney area—about 800 kilometres away—with sporadic outbreaks in the regions.

The northern NSW area, closest to Queensland, has had no active cases except for sewerage samples, as well as a man and his two teenage children found travelling to Byron Bay from Sydney last month.

The Federal Employment Minister Stuart Roberts said the health orders were tough but said the truckies should not have held the action on the Gold Coast and inconvenienced thousands.

“Vaccination seems to be the way for us to be able to get through this, to get back out of lockdown and to get ourselves back to the freedoms that we love here in Australia,” he said.

“International seafarers are the backbone of the economy, but a growing number of COVID outbreaks on vessels arriving in Australian ports highlights the need for urgent action to protect the health of these workers, reduce the risk of community transmission, and strengthen supply chain resilience,” ITF Australia co-ordinator Ian Bray said.