While the corporate media and Big Tech social media sites continue to promote the COVID-19 injections by highlighting those who proudly receive them and are not afraid to show their compliance publicly, sometimes even mocking anti-vaxxers, when those same people then end up crippled or dead a short time later, do not expect to see those stories in the corporate media or Big Tech social media.

After all, that would be bad for the “vaccine” business and their goals to inject everyone with these bioweapons.

But here at Health Impact News we will keep publishing those stories to show what happens to many of these who so proudly advertised their “vaccine status” in public, and today we have 3 more that have been recently published on The COVID Blog.

The first one is a British software developer who mocked anti-vaxxers but is now totally paralyzed with Guillain-Barré Syndrome and in an induced coma, the second one was a 30-year veteran of the BBC as a sports reporter who is now dead, and the third one was a Filipina actress and comedienne who praised Jesus for her COVID shots, and is now dead. 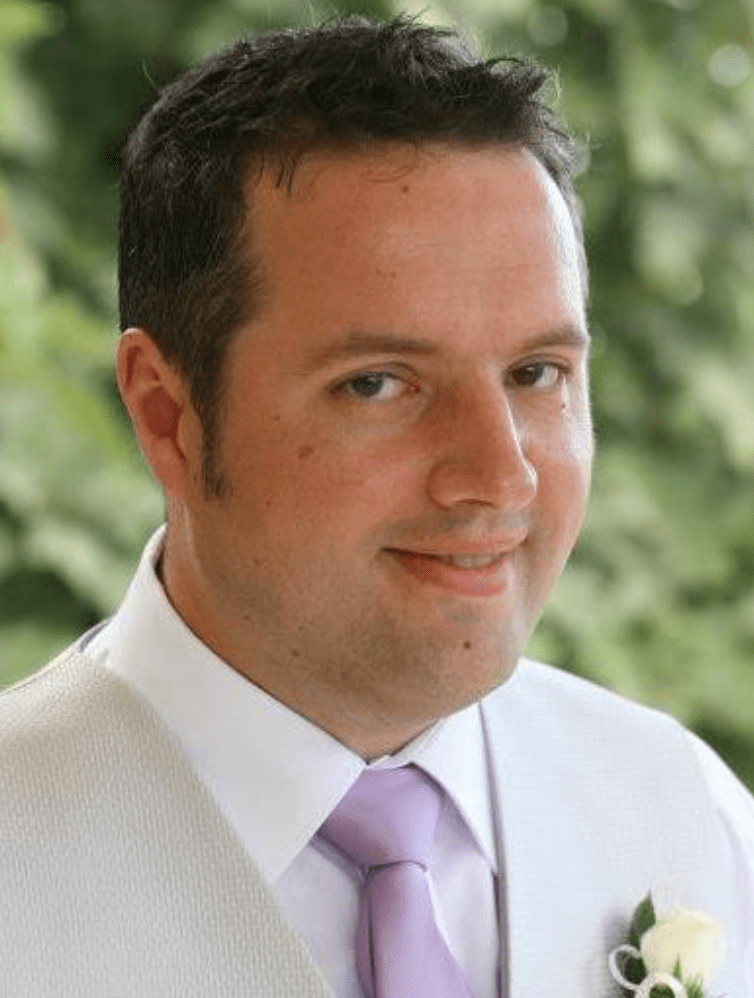 NOTTINGHAM, EAST MIDLANDS — A 46-year-old British software developer has been a loyal, unpaid spokesperson for experimental COVID-19 shots since 2020. His prognosis and future are now uncertain.

Mr. Paul Bainbridge received his first dose of experimental AstraZeneca viral vector DNA on March 13, according to his Facebook page. The United Kingdom government provides very ambiguous guidance as far as time between the two AstraZeneca doses. The Medicines and Healthcare products Regulatory Agency (MHRA), the U.K. equivalent to the U.S. Food and Drug Administration, recommends the second AstraZeneca doses “4 to 12 weeks” after the first. 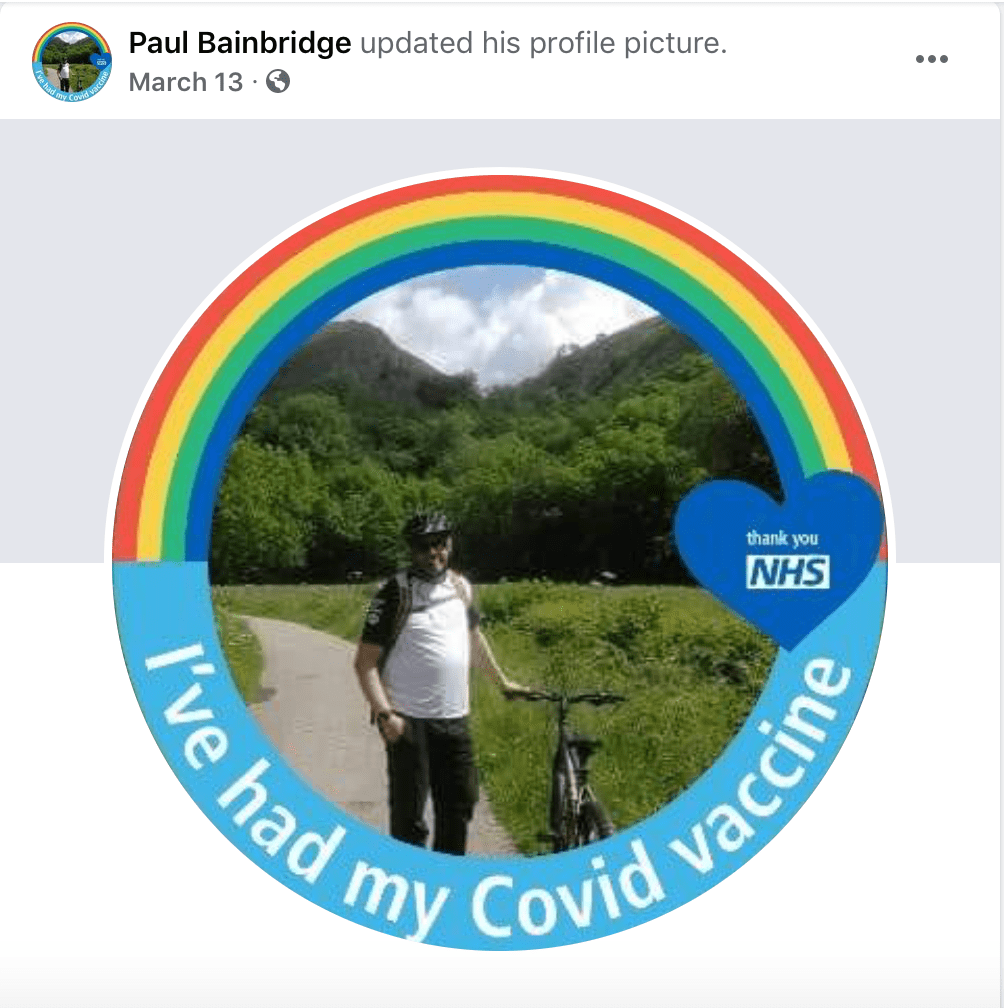 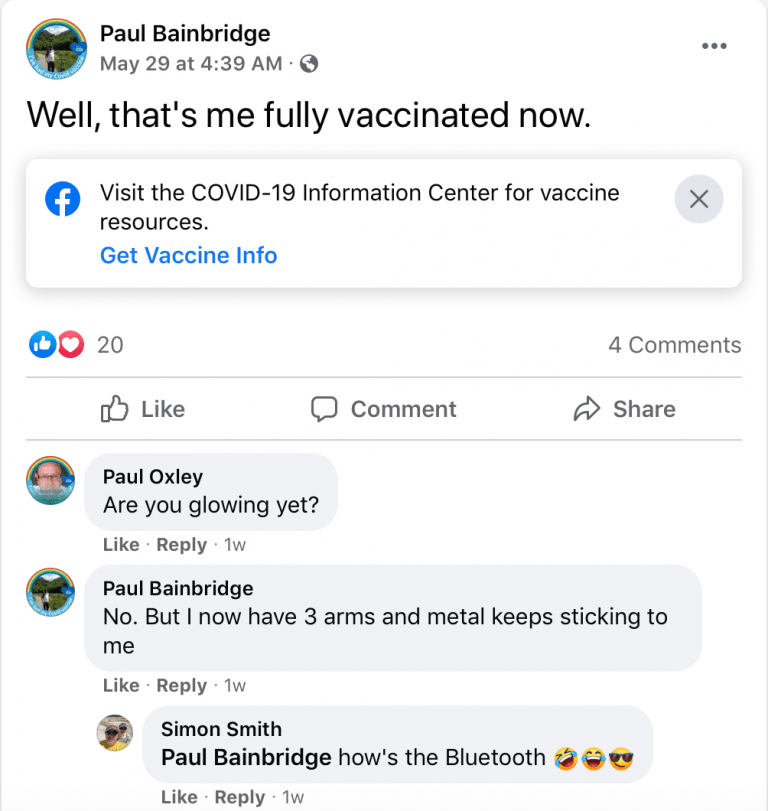 A friend of Mr. Bainbridge named Paul Oxley asked “are you glowing yet” after the second AstraZeneca dose. Mr. Bainbridge responded, “No. But I have 3 arms and metal keeps sticking to me.”

Mr. Bainbridge has posted many statements since 2020 showing his loyalty and obedience to anything the World Health Organization and big pharma tell him. He confirmed that he received the AstraZeneca shot in a comment on his March 16 post. 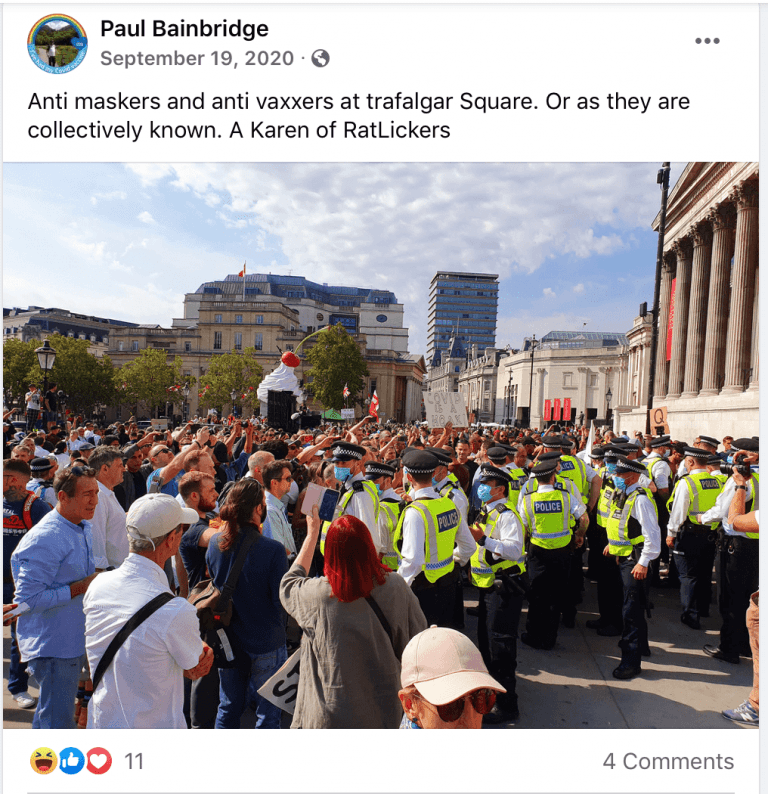 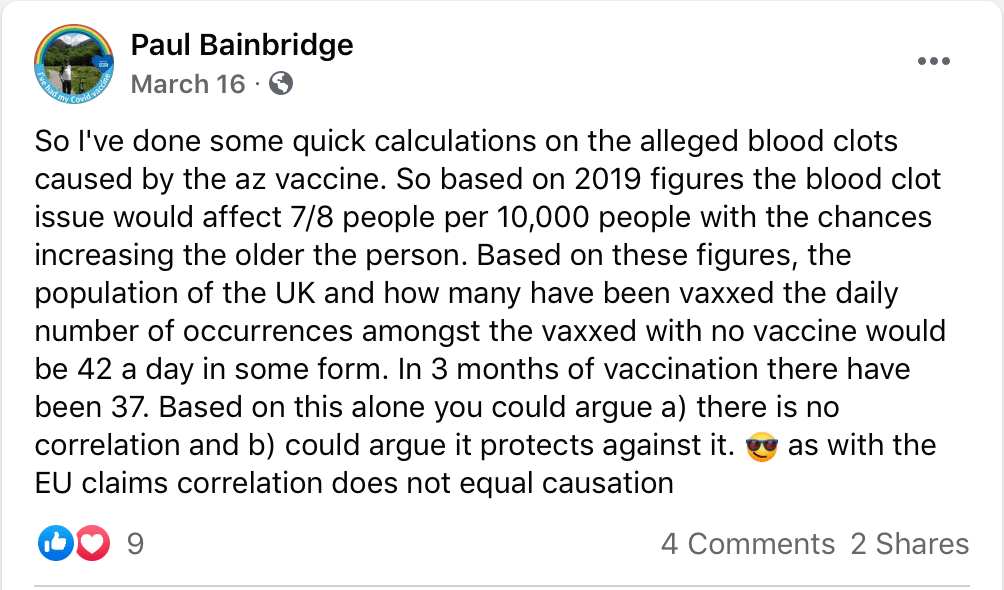 Mr. Bainbridge commented on Facebook or around June 2 about several medical issues. A reader emailed us a screenshot that has since been deleted from Facebook.

Mr. Bainbridge felt “pins and needles” in his hands on Sunday, May 30. He said “two spinal taps confirmed it” by Monday, May 31. His whole body was paralyzed on Wednesday, June 2 and he was placed in a medically-induced coma that day. He was also diagnosed with methicillin-resistant Staphylococcus aureus (MRSA), pneumonia, and sepsis. 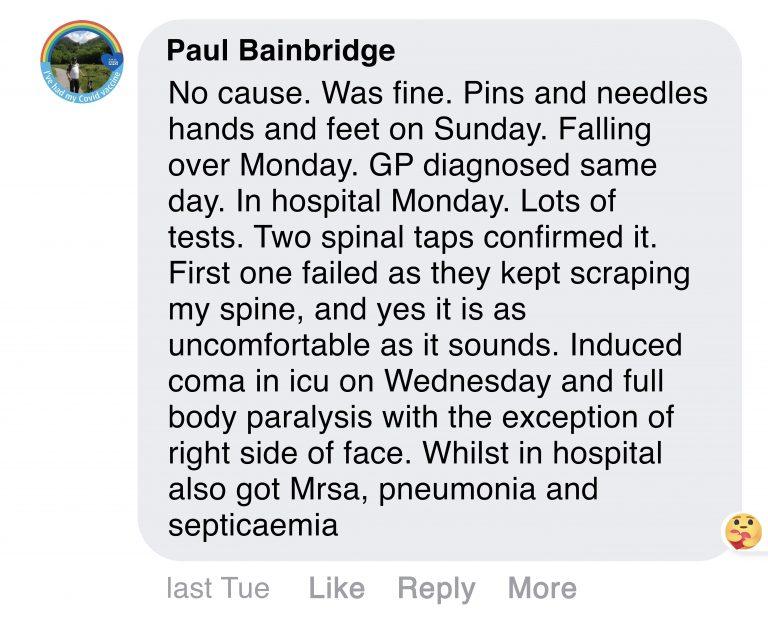 A primary symptom of Guillain-Barré Syndrome (GBS) is the “pins and needles” feeling Mr. Bainbridge described. Spinal taps are required to diagnosed GBS. Mr. Bainbridge has GBS. What’s worse is that he apparently kept needling (no pun intended) non-vaxxers after his diagnosis. This June 3 post is his last, as he has not updated Facebook since. 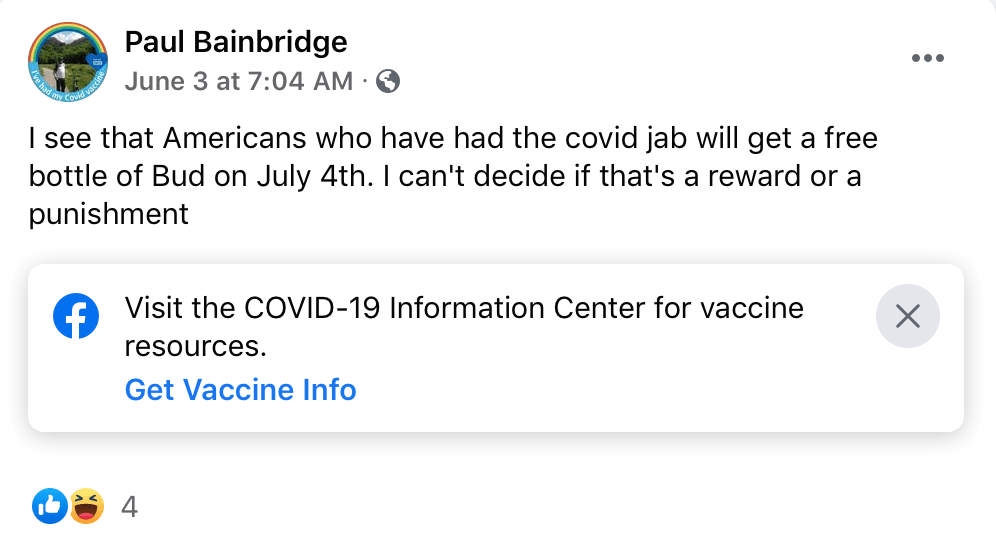 At this point it doesn’t matter how much we plead with the public to stop the social media “I’m vaxxed” photos. Mr. Bainbridge is at least the fourth case of instant karma we’ve covered here. Ronald Babb, Dr. Thomas Flanagan, and Dr. Witold Rogiewicz are the others. Obviously this blog cannot capture every case like this. We know it happens far more often.

The United States reached its voluntary vaxxed plateau last month. Now they are conning people with burgers, weed, lotteries and other incentives to inject themselves with poison. Colleges and universities are the next battleground, as virtually all of them are mandating experimental mRNA and viral vector DNA shots for all students in the Fall 2021 semester. 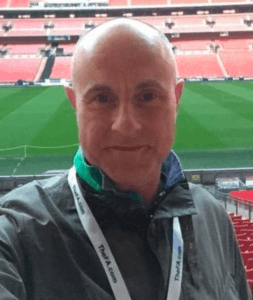 Mr. Dom Busby received the first dose of experimental AstraZeneca viral vector DNA on March 14, according to his Twitter page. He not only posted photos of himself receiving the injection, but also implied that his children would be getting injected as well. 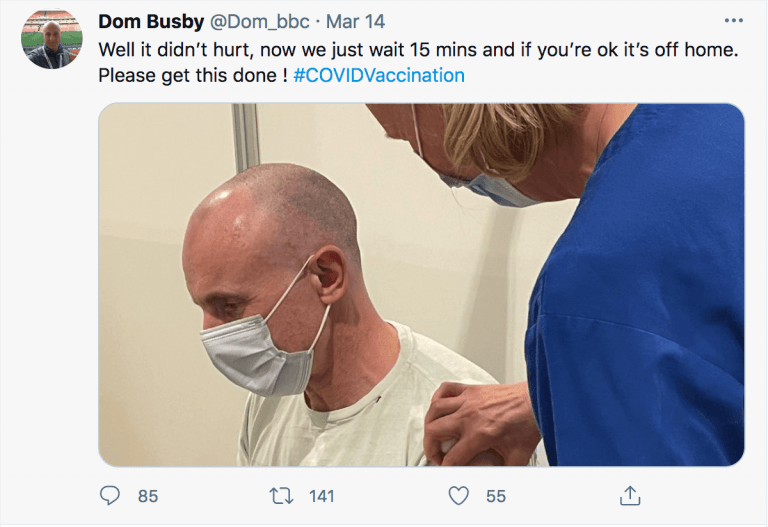 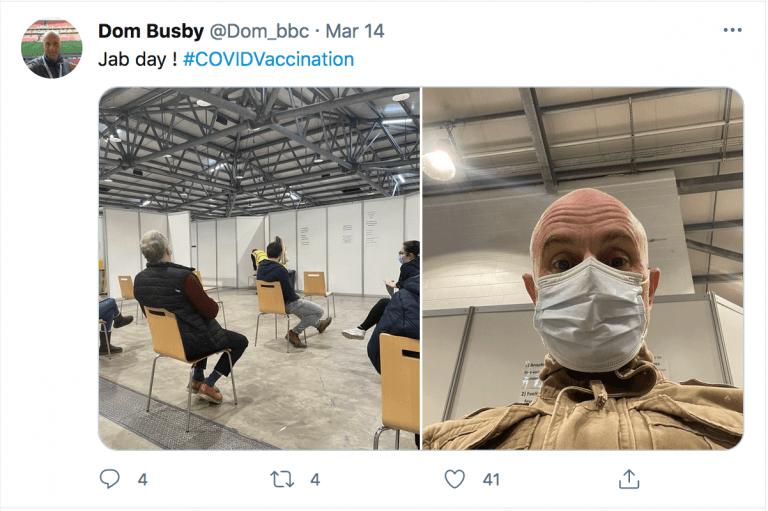 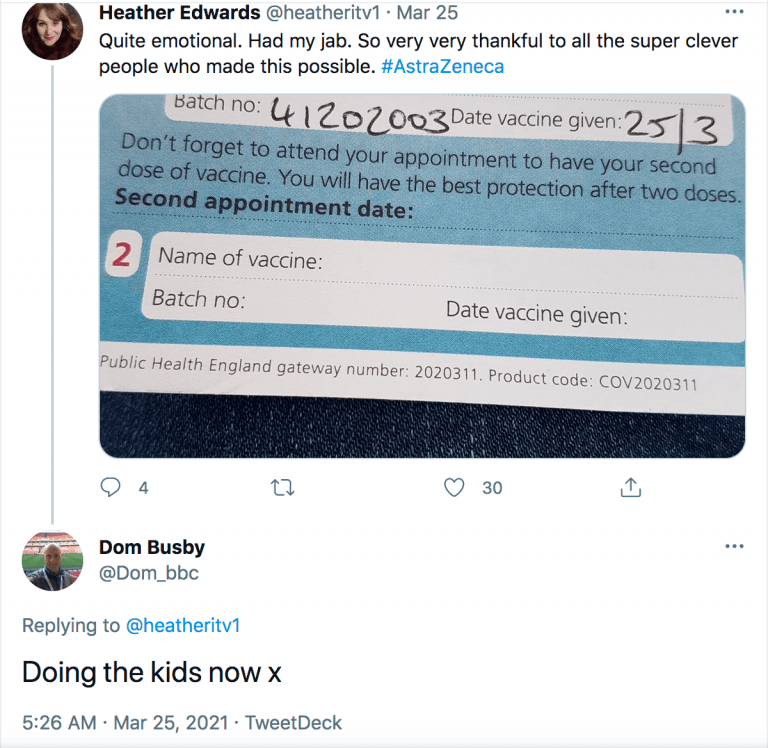 Mr. Busby was naturally very active on Twitter because of his profession as a sports reporter. He tweeted or re-tweeted 93 times in March, then 22 times from April 1 to April 10. He completely vanished thereafter. The United Kingdom recommends 12 weeks between AstraZeneca doses. Thus Mr. Busby would have been due for his second shot on or around June 14.

The BBC reported that Mr. Busby passed away on June 10 after a “short illness.” No further details were given. But a colleague and friend of his named Stuart Clarkson said Mr. Busby died from an inoperable brain tumor. Clarkson also said Mr. Busby was in palliative care for weeks, meaning his death was expected for quite some time. Clarkson is also adamant about deflecting all attention away from the AstraZeneca injection.

Mr. Busby is the second BBC presenter to die after the AstraZeneca shot in the last three weeks. BBC Radio Newcastle presenter Lisa Shaw died on May 21, about 14 days after the jab. But at least there is some semblance of transparency there, as the coroner is “considering” listing her death as being caused by the AstraZeneca shot. But we all know that is highly unlikely to happen.

Further, this is now the second case we’ve covered of someone developing brain tumors shortly after experimental mRNA or viral vector DNA shots. Ms. Jovita Moore is the Atlanta news anchor who is still on leave after brain surgery to remove two tumors that developed two weeks after the Pfizer mRNA shot. She underwent brain surgery on April 15. There have been no further updates since May 9.

Mr. Busby worked for the BBC for over 30 years. Tributes from colleagues and friends continue pouring in on social media. 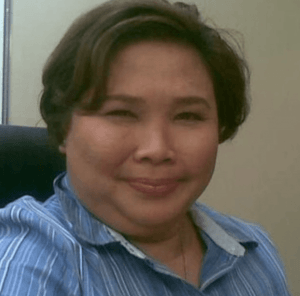 QUEZON CITY, PHILIPPINES — A 55-year-old actress and director is dead after her very public and very ironic social media posts.

Ms. Arlene Tolibas received her second dose of the Chinese experimental Sinovac Coronavac “inactivated virus” shot on May 13, according to her Facebook page. She thanked Jesus and the local government for the injections. 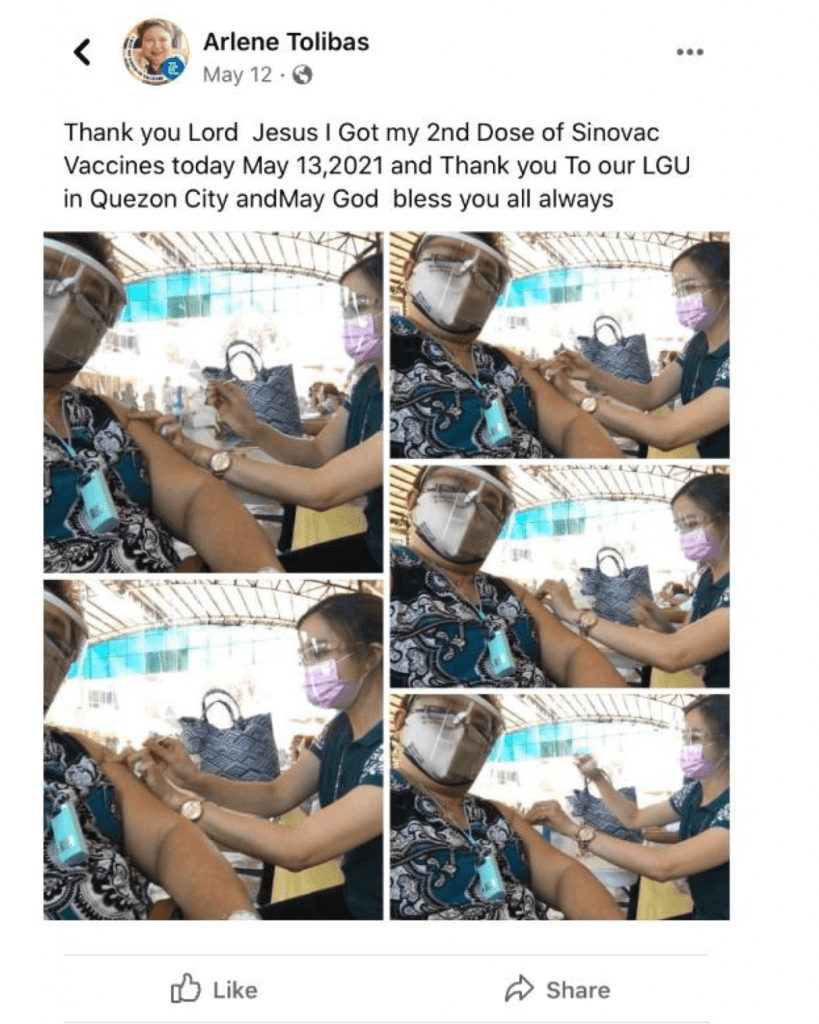 Ms. Tolibas apparently suffered no immediate adverse effects. In fact she thanked Jesus again on May 27 for the injections. 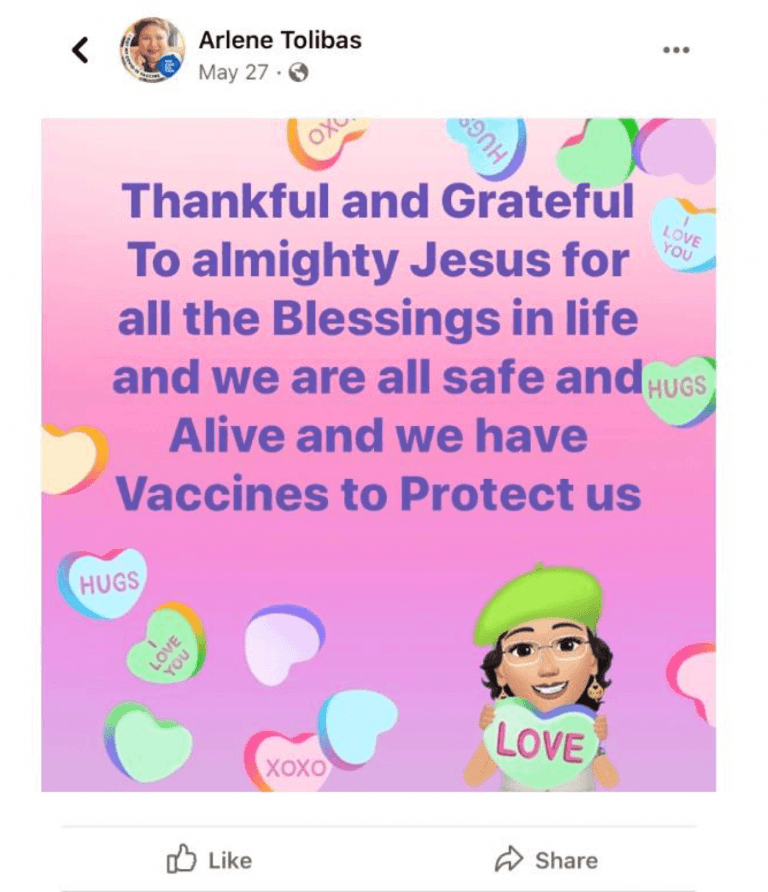 Both of the foregoing posts have since been deleted, or at least are now well-hidden. Her entire Facebook page is a bit strange, as the same video is posted numerous times on May 28 and 29, making it very difficult to scroll through her posts before that day. We received these screenshots from one of our readers. Ms. Tolibas was very active on Facebook in the last days of May, with many posts referencing her Christianity and Jesus. 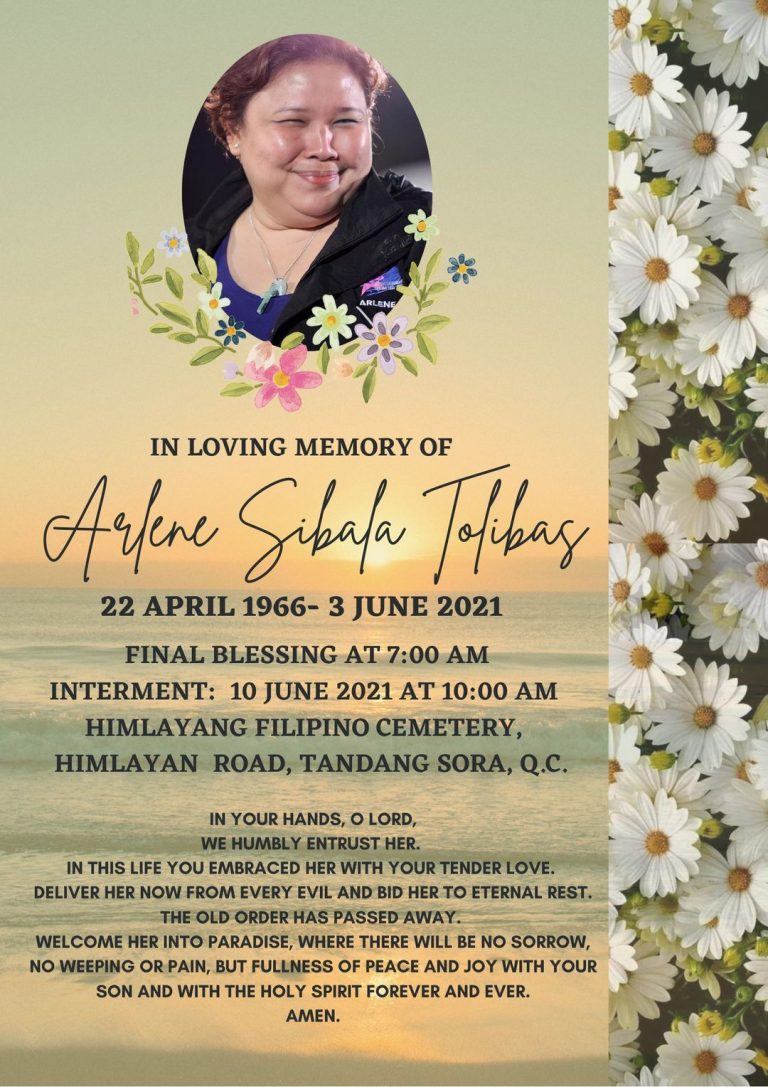 Last time we wrote about the Philippines, 24 people died from AstraZeneca and Sinovac Coronavac shots by early May. President Rodrigo Duterte received the Chinese Sinopharm injection on camera, while everyone else got Sinovac, causing major controversy. Now there are apparently delays in the Philippines receiving their promised doses, forcing them to shut down “vaccination sites.” The Philippines FDA also recently authorized children ages 12 to 15 to receive Pfizer shots.

Ms. Tolibas appears to equate Jesus and the experimental injections. But some Christians believe these mRNA, viral vector DNA, and “inactivated virus” shots are sinister and evil.