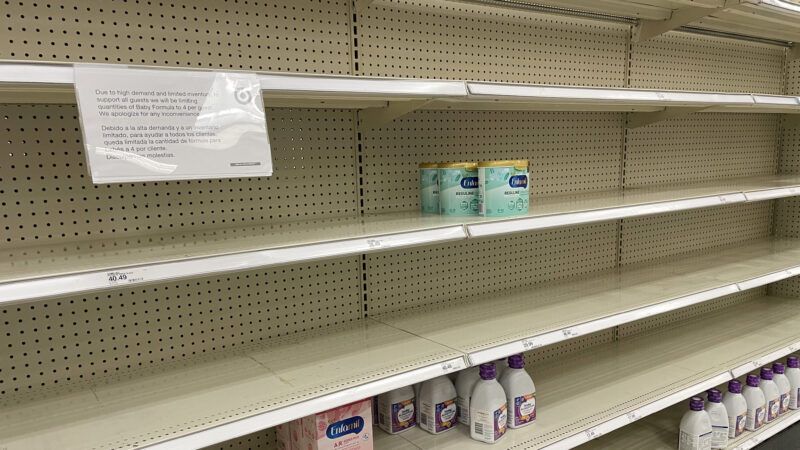 The Food and Drug Administration (FDA) has finally determined what’s to blame for America’s recent shortage of baby formula: The FDA.

More specifically, it’s the FDA’s unnecessary and protectionist rules that effectively ban foreign-made baby formula from being imported into the United States. On Wednesday, the agency announced plans to tweak those rules so foreign formula manufacturers can permanently import their goods into the U.S., giving American consumers greater choice in the marketplace and ensuring more robust supply chains.

“The need to diversify and strengthen the U.S. infant formula supply is more important than ever,” FDA Commissioner Robert Califf said in a statement. “Ensuring that the youngest and most vulnerable individuals have access to safe and nutritious formula products is a top priority for the FDA.”

That might be true now, but it clearly hasn’t been the case in the past. As Reason has detailed throughout the recent crisis, the FDA’s priorities have been protecting the domestic formula industry (and the dairy industry, which provides key inputs for baby formula) from foreign competition. As a result, it’s nearly impossible to find foreign-made baby formula in the U.S., even though formula manufacturers based in England, the Netherlands, and Germany are some of the biggest suppliers of baby formula to the rest of the world.

When the Abbott Nutrition plant in Michigan was forced to close temporarily due to an FDA investigation into possible contamination, it created a supply shock that left store shelves empty and parents scrambling to find formula. Because of the FDA’s protectionist rules (and high tariffs levied on foreign-made formula), markets could not adapt quickly to the shortage here in America—instead, we got political stunts like the White House’s “Operation Fly Formula” that accomplished little.

In testimony to Congress, FDA officials admitted to botching the response to the contamination at the Abbott plant. But the real culprit of the recent shortage was a deeper and more pervasive one. No matter what nationalists like Sen. Josh Hawley (R–Mo.) might suggest, closing off the country to international trade is not a recipe for resilience. The baby formula crisis demonstrated that it is quite the opposite.

So it’s good to see the FDA admit those mistakes and crack open the door to allowing foreign formula into the U.S. on a permanent basis.

Unfortunately, the list of policy changes the FDA announced on Wednesday mostly amounts to providing technical assistance to foreign firms that want to sell formula here. That is, offering help in navigating the complex approval process, rather than sweeping aside those regulations entirely. If a formula maker has passed muster under E.U. regulations, that should be good enough for the FDA.

There’s also the matter of tariffs on imported formula, which are so high that they effectively make any imported formula uncompetitive in the American market. Why would a foreign manufacturer like Holle or HiPP go through the complicated FDA approval process (even after the announced changes) if it knows in advance that its goods won’t be able to compete on a level playing field in America?

Give the FDA credit for identifying itself as one of the major causes of the baby formula shortage. But more changes are needed—including permanent changes to U.S. trade policy—to ensure a disaster like this can’t happen again.