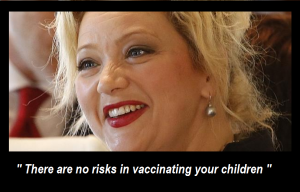 Australia’s chief medical officer says there has been a significantly higher number of flu cases than normal in people who have been vaccinated. At least 170,000 cases have been confirmed this season, about two-and-a-half times more than in 2016.

More people getting the flu shot means more serious flu outbreaks so what a great business model for Big Pharma.

Jill Hennessy & the Victorian Government are pushing to offer free flu vaccinations to all kids from six months to five years old. Health Minister Jill Hennessy said young children must be added to the flu shots program from next year.

Is this a wise idea considering the fact that the dangerous fluvax vaccine was banned by the government for children under 5 years of age for causing serious adverse reactions?

Seasonal flu vaccinations across Australia for children under five were suspended back in 2010 after 23 children in Western Australia were admitted to hospital with convulsions following their injections. One child was left severly brain damaged after recieving the shot.

Minister Hennessy says, A flu shot costs about $10, so giving them to all children under five could add millions to the program’s annual cost. But it might bring savings in productivity and health costs, not to mention saving lives. Jill Hennessy seems to live in her own fantasy world & how can a failed flu vaccine that offers very little to no protection against flu strains increase productivity & save on health costs? The flu shot can cause serious adverse reactions & even death.

What Minister Hennessy really means is, A flu shot costs about $10, so giving them to all children under five could add millions to our pockets & ensure we keep profiting from sick kids.

It defies belief that Minister Hennessy would come out & push free flu shots onto children straight after health authorities admitted that it offers no protection. The mainstream medias own reports interviewed people who got the flu after being given a flu shot. Why on earth would a health minister be even pushing flu vaccines when in reality the only thing that will protect people from getting sick is a healthy immune system, a health minister should know this.

This kind of one-sided & arrogant behavior should ring serious alarm bells for many Australians that may be asking who  Minister Hennessy really represents. Minister Hennessy does not represent the health of the Australian people in any way shape or form but she does seem to represent big Pharmaceutical, Can this be proven? only time will tell

Health Officials Admit 2017 Flu Vaccine Failed  It seems as though every year it is the same exact story. The flu shot fails. But the “flu shot is still the best thing going.” In four of the last seven flu seasons, flu vaccine was essentially ineffective in seniors, past studies suggest. The worst performances tend to be in H3N2-dominant seasons.

Let’s take a look at a few cases where serious damage has occurred in children after receiving a flu jab.

TODDLER WHO WAS GIVEN AN ADULT FLU SHOT IS LEFT SEVERELY BRAIN DAMAGED AND UNABLE TO WALK OR TALK A TODDLER taken to the doctor for a child’s flu shot was left unable to walk or talk after being given a version of the drug banned for under fives.

Saba Button suffered brain and organ damage after getting the Fluvax shot when she was 11 months old in 2010. Why would a health minister be pushing dangerous & potentially deadly flu vaccines onto children knowing they don’t even work?

Narcolepsy cases linked to flu vaccine subject to new compensation dispute The Pandemrix vaccine made by GlaxoSmithKline (GSK) was given to 6 million people in Britain and millions more across Europe during the 2009-10 swine flu pandemic, but was withdrawn when doctors noticed a rise in narcolepsy cases among those who received the jab.

Did the Flu Shot Leave a 10-Year-Old Girl Paralyzed? Marysue Grivna of Town ‘N Country, Fla., used to sing in her church choir and was an enthusiastic elementary-school student. But now the 10-year-old girl is bedridden, and her mother, Carla, blames her daughter’s condition on the flu vaccine, 10 News in Tampa Bay Sarasota reported.

10 deaths linked to anti-flu vaccines TEN deaths have been linked to the nation’s flu immunisation program since the 2009 swine flu pandemic, including elderly patients and unborn babies.

The CSL flu vaccine, Panvax – which taxpayers spent $131 million stockpiling for the 2009 swine flu outbreak – triggered 1716 adverse-event reports, including seven deaths. They included a stillbirth in October 2009 and another fetal death in April 2010, after “maternal exposure” to Panvax.

A healthy, 9-year old Florida girl was paralyzed by the flu shot On November 20, 2013, Marysue had a seasonal flu shot. Within days, she became limp, then paralyzed.

The flu shot is the most defective vaccine ever made – here’s proof  The annual flu vaccine is by far the most dangerous medical product in the world.

10 Reasons Why Flu Shots Are More Dangerous Than a Flu!