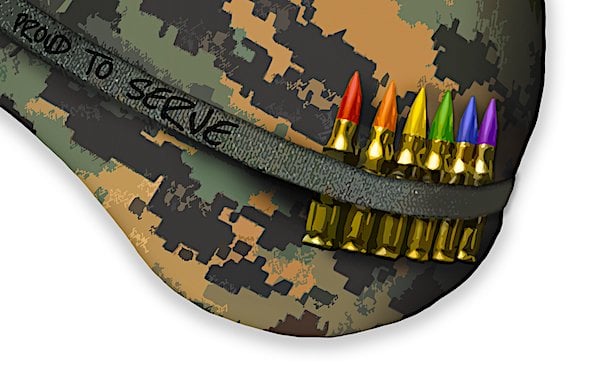 The U.S. Marines have used a number of “tough-guy” slogans over the years.

From “looking for a few good men” and “the few, the proud, the Marines” to “We don’t promise you a rose garden.”

They even once adopted a slam that, according to lore, the Germans during War War I created to identify the U.S. Marines: “teufelhunden,” or “devil dogs”.

Now the corps has moved on.

To, perhaps, “See our rainbow bullets.”

In a social-media statement this week promoting the LGBT social agenda, the “few good men” in the corps said, “Throughout June, the USMC takes #Pride in recognizing and honoring the contributions of our LGBTQ service members. We remain committed to fostering an environment free from discrimination, and defend the values of treating all equally, with dignity and respect.”

The Marine social media campaign included an image of a camo helmet, with six rainbow colored bullets in the helmet strap.

A commentary at the Post Millennial openly wondered whether the military has lost its focus, which has been described, brutally, as to win wars by killing enemies and blowing up things.

“The U.S. armed forces in general has recently come under fire from its critics, who often say that the military is more concerned these days with identity politics and political correctness than with their core mission and purpose, namely protecting Americans,” the report said.

“Replies to the tweets have been expectedly all over the place, but there has been a lot of widespread criticism of the measure, with people both pointing out the U.S. military’s apparent hypocrisy on the issue, and also expressing their feelings that the world’s greatest fighting force is becoming something of a paper tiger.”

Podcaster Tim Pool turned sarcastic, with, “I love the rainbow bullets. I wonder if it’s like a pigs blood thing and meant to offend the religious groups whose children we kill overseas.”

And Claiborne Institute senior fellow David Reaboi pointed out, “It’s the only thing you’re committed to, at this point.”

The social-media responses to the Marine promotion of the LGBT lifestyle choices aren’t likely to end up in a promotional campaign, however.

They included, from anonymous responders, “Makes me sad,” and “WW3 will surely go well for us…” to “At first glance I thought those were crayons” and “Crayons woulda made more sense.”

Pointedly, one asked, “Do you think you could handle another Chosin or Okinawa while serving under the rainbow flag?”

Chosin was one of the fiercest battles of the Korean war, when 30,000 U.S. and allied troops were surrounded by 120,000 Chinese troops who had orders to destroy the allies. Instead, the American troops, fighting in extreme cold in that December of 1950, inflicted heavy damages on the Chinese while effecting a successful retreat.

Okinawa was the last major battle of World War II, and one of the bloodiest. More than 180,000 U.S. soldiers and Marines descended on the Pacific island for a final push toward Japan. The Americans, despite facing kamikaze fighters, rain and fierce resistance on the islands, won.

Also submitting to the politically correct social-sexual agenda of LGBT was the U.S. Embassy to the Holy See in Vatican City: