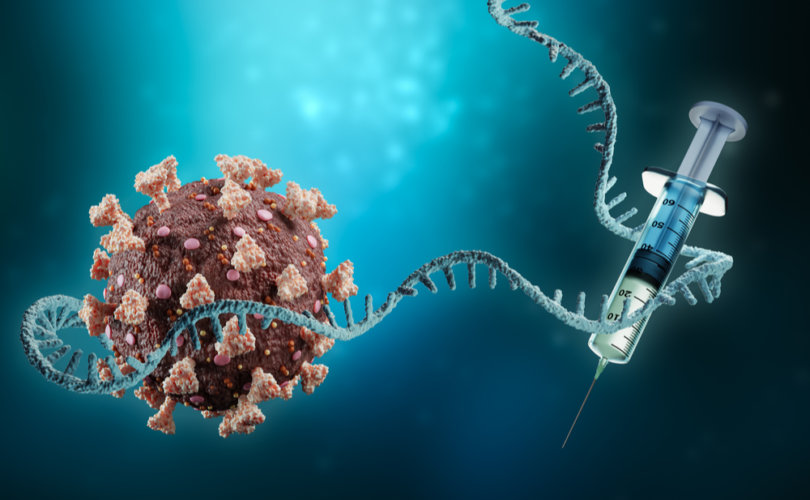 (LifeSiteNews) — A recently published scientific article[1] shows evidence that it is not possible to guarantee that mRNA in the Pfizer genomic COVID “vaccine” will never be integrated into the DNA of cells with which it is in contact. The peer-reviewed article in Current issues in molecular biology (available on the open-access platform mdpi.com, here), came as a bomb-shell that directly contradicts ongoing claims by the Centers for Diseases Control that “COVID-19 vaccines do not change or interact with your DNA in any way.”

Titled “Intracellular Reverse Transcription of Pfizer BioNTech COVID-19 mRNA Vaccine BNT162b2 In Vitro in Human Liver Cell Line,” the study appears to justify concerns that the genomic “vaccines” could potentially be modifying, to an unknown extent, the DNA of at least some of the 5 billion individuals having received at least one dose to date.

Its authors consider that the Pfizer jab “showed high efficiency in a wide range of COVID-19-related outcomes in a real-world setting,” but they warned, “Nevertheless, many challenges remain, including monitoring for long-term safety and efficacy of the vaccine. This warrants further evaluation and investigations. The safety profile of BNT162b2 is currently only available from short-term clinical studies.”

The Swedish study led by Markus Aldén at Lund University does not go as far as to prove that once injected into the human body, the full mRNA, devised to trick cells into producing the SARS-CoV-2 Spike protein in order to elicit an immune response, will actually be integrated into the human genome. But it seems to indicate that under the conditions of the study, a fragment of the messenger RNA quickly made its way into cancerous human liver cells, i.e the Huh7 cell-line derived from the tumor in an adult’s liver. This led to “changes in gene expression of long interspersed nuclear element-1 (LINE-1),” said the abstract.

French geneticist Professor Alexandra Henrion-Caude told LifeSiteNews that while she felt a little uncomfortable with the somewhat “misleading” way in which the title presented this study to the readers, the issue of the fate of the mRNA in humans should have prompted a worldwide immediate concern, and should warrant far more prudence and studies addressing the risk of “reverse transcription” and “integration,” and thus potential human modification.

Before quoting further remarks by Henrion-Caude, it is important to understand that in normal conditions, a portion of DNA serves as a template to make mRNA molecules within the nucleus of the cell; the messenger RNA then goes out into the cell and triggers the production of the corresponding protein. In “reverse transcription,” the process works the other way around, with RNA serving as a template to make DNA. Whether this neo-portion of DNA will penetrate into the nucleus and integrate into the genome of the cell is a second question.

The Swedish study used the Pfizer vaccine BNT162b2, which is composed of encapsulated modified synthetic mRNA encoding a modified SARS-CoV-2 Spike protein developed by Pfizer-BioNTech. This product from Pfizer was put in contact with liver cells since the liver is a major site of distribution as indicated below:

In pharmacokinetics data provided by Pfizer to European Medicines Agency (EMA), BNT162b2 biodistribution was studied in mice and rats by intra-muscular injection with radiolabeled LNP and luciferase modRNA. Radioactivity was detected in most tissues from the first time point (0.25 h), and results showed that the injection site and the liver were the major sites of distribution, with maximum concentrations observed at 8–48 h post-dose.

The amount of BNT162b2 used by Aldén and his colleagues was scaled down (meaning it was diluted) to mimic the concentrations observed in various organs from previous studies of mRNA flu vaccines (these concentrations were about 100 times lower than on the injection site). They then looked for the presence of potentially reverse-transcribed BNT162b2 in the liver cells’ DNA, first eliminating the injected mRNA and then using PCR tests. Untreated cells were used as controls.

The first result of this study is that treated cells were shown to have “high levels” of the BNT162b2 mRNA, varying at points in time, decreasing after 24 hours but increasing again at 48 hours. According to the authors, the study presents “evidence that COVID-19 mRNA vaccine BNT162b2 is able to enter the human liver cell line Huh7 in vitro”.

The second result is that the exposure of those cells to the Pfizer product led to an increase in the expression of LINE-1, which is one cell’s own source of reverse transcriptase.

The third result of this study, last but not least, is that a reverse transcription into DNA of some of the Pfizer RNA product can occur intracellularly, and that this process is helped along by the cell’s own reverse transcriptase LINE-1.