‘If you’re white and your parents have a savings account, that is very much so connected to slavery and land theft… ‘ 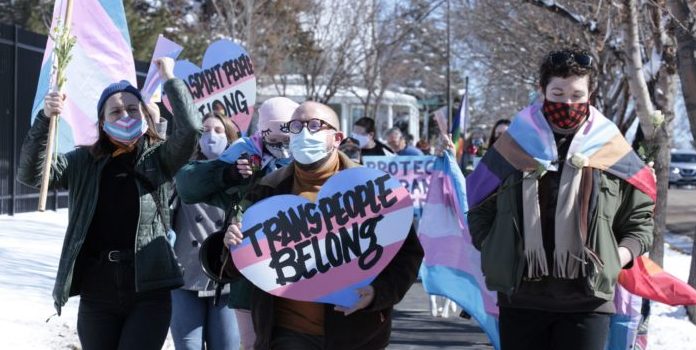 Taxpayer-funded transgender organizations want society to “decolonize the gender binary,” force white people to pay reparations to “gender-nonconforming people” and “affirm mustache[s] and big *ick[s]” as “authentic expression of womanhood,” in the latest round of woke lunacy to defy basic biology.

“Last year, a group of Washington State gender-identity nonprofits—all of which work with children and receive public funding—hosted a presentation series called ‘Decolonizing Gender,’ claiming that “the process of creating men and women actually is the process of genocide,” Rufo tweeted.

One of the participants was Ganesha Gold Buffalo, a “transgender sex worker,” who said that colonialism was the reason why he woke up to screams of his ancestors early in the morning and followed their voices into the woods where the spirits “decolonized [his] mind.”

“Ganesha Gold Buffalo, a male-to-female trans “sex worker,” said that colonialism caused him to “[wake] up at four in the morning … to sounds of my ancestors screaming from outside my window,” Rufo reported. “She followed the voices into the woods and the ‘nature spirits’ decolonized [his] mind.”

Forgetting about basic biology to not offend “transgenders” is critical, according to Gold Buffalo. He said that society should affirm her identity as a woman with a penis, according to Rufo’s tweet.

“I 100 percent want to still be able to look in the mirror and see every part of myself as a woman … my mustache, all of my facial hair, my untrimmed brows, my fat ass, my belly, my big *ick.”

These activists also noted that society should accept gender identities and pronouns such as “cyborg,” “Pokemon trainer,” “Wakanda” and “unicorn,” the tweet indicated.

Another panelist concluded that straight white people should pay reparations to “trans people.”

“If you’re white and your parents have a savings account, that is very much so connected to slavery and land theft, pay people,” she said.

“Pay that money to us now.”