Attorneys general from 16 states, led by Louisiana, filed a new legal challenge to COVID-19 vaccine mandates for U.S. healthcare workers claiming the mandates are illegal and obsolete, as the vaccines don’t work against Omicron, the dominant variant in the U.S. 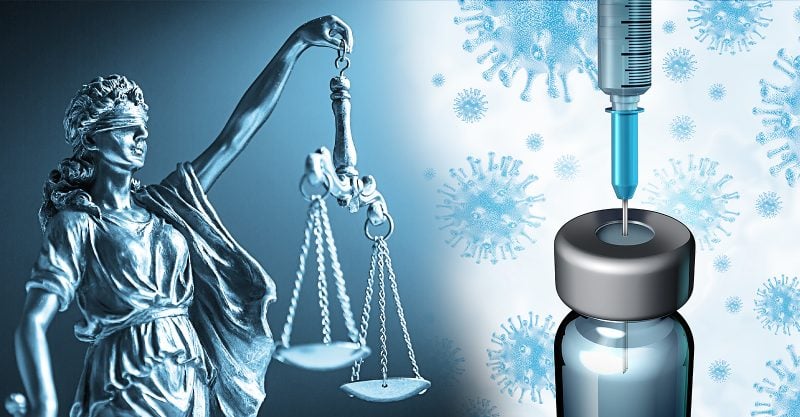 The amended lawsuit was filed Feb. 4 in the U.S. District Court for the Western District of Louisiana against the U.S. Department of Health and Human Services (HHS), HHS Secretary Xavier Becerra, the Centers for Medicare and Medicaid Services (CMS) and Chiquita Brooks-Lasure, administrator of CMS.

The suit seeks to block the mandate for healthcare workers in the 25 states that previously challenged it and where it is set to take effect beginning this month.

The revised lawsuit puts forth a series of new arguments, including that the CMS mandate was designed in response to the Delta variant and is therefore now obsolete.

The amended lawsuit comes in response to the U.S. Supreme Court’s Jan. 13 decision, which lifted injunctions that had been in effect in 25 states. The Supreme Court said mandates could go into effect while lawsuits challenging it continue to weave their way through the judicial system.

An appeals court later lifted the injunction in 26 states on Dec. 15, 2021, but the mandate was then separately blocked in Texas that same day by another judge.

These developments prompted the Biden administration in late December 2021 to file an emergency request with the Supreme Court, asking the court to lift the various injunctions barring implementation of the CMS mandate.

The mandate, as originally issued by the CMS, specifically applies to healthcare workers at hospitals and facilities that receive federal funding — namely, those that accept Medicare and Medicaid payments.

Healthcare workers in Texas have until Feb. 22 to receive their first dose, and March 21 to complete their primary series of vaccinations, while in states where the mandate had not previously been blocked, the respective deadlines are Jan. 27 and Feb. 28.

Louisiana Attorney General Jeff Landry described the CMS vaccine requirement as a “job-killing directive” that is ineffective as a measure to stop the spread of COVID or protect public health.

“The CMS vaccination rule remains a misguided, one-size-fits-all, job-killing directive that does not account for any change in circumstances — including how the vaccines do not stop the transmission of the Omicron variant.

“What’s more, the federal government has now made clear that it expects the states to implement this flawed policy with state employees. So I will continue fighting this ill-advised invasion of individual autonomy and my state’s rights.”

Landry said the mandate is “causing havoc in the healthcare labor market across the nation — especially in rural communities.”

The lawsuit addresses a notable discrepancy: The mandate, signed by Becerra, specifically references the danger the Delta variant poses to the unvaccinated, adding that vaccines “continue to be effective in preventing COVID-19 associated with the now-dominant Delta variant.”

The Supreme Court agreed with Becerra’s reasoning, stating he had “good cause” to impose the mandate without the typically mandated comment period, because of his belief that any additional delay would pose a danger to patient health and safety in light of the spread of the Delta variant.

The lawsuit argues that as of mid-December 2021 and based on data from the Centers for Disease Control and Prevention, Delta was no longer the prevalent strain of COVID, having been replaced by Omicron:

“[T]he Secretary’s rationale for the rule and for avoiding public comment no longer exists. The Delta variant has run its full course.

“… It is now established beyond any serious question that the secretary’s speculation was wrong. The Delta variant effectively disappeared from the scene within weeks of the issuance of the rule.”

“The mandate was promulgated in response to the Delta variant, which now accounts for only 0.1 percent of all COVID-19 cases in the United States.

“But research suggests that COVID-19 vaccines do little to stop the transmission of the predominant strain today — the Omicron variant, which accounts for 99.9 percent of all cases — which undermines the premise for forcing people to submit to them.”

The amended lawsuit states, “Omicron’s transmission is largely undeterred by the vaccines.”

The lawsuit also references findings by the American Association of Retired Persons Public Policy Institute, which indicates nursing homes and long-term care facilities are already facing a severe shortage of nurses and aides, without the mandate having yet gone into effect.

The lawsuit argues these low staffing levels place patients at greater risk, including a higher likelihood of contracting COVID:

“By forcing healthcare workers to choose between their jobs or an experimental vaccine they do not want, CMS is affirmatively pinching an already strained workforce — and particularly so in rural areas within the States.”

The lawsuit also notes the shifting and contradictory position of the federal government, which, for instance, recently issued guidance permitting healthcare workers who have tested positive for COVID to go to work, which undercuts the policy that prohibits unvaccinated healthcare workers from going to work even with a negative test result.

The lawsuit further argues the CMS vaccine mandate violates the Tenth Amendment of the U.S. Constitution concerning states’ rights; the Spending Clause of the Constitution; the Anti-Commandeering Doctrine, which stems from two Supreme Court decisions prohibiting the federal government from commandeering state governments; and the Nondelegation Doctrine, a principle in administrative law that stipulates Congress cannot delegate its legislative powers to other entities.

In contrast, government lawyers told the U.S. District Court for the Western District of Louisiana in January that following the Jan. 13 Supreme Court decision striking down the previous injunctions, the case was “effectively concluded,” and they submitted a motion for its dismissal.

The CMS on Jan. 25 issued new guidance that broadened the mandate, extending the vaccine requirement to surveyors who enter the healthcare facilities covered by the rule.

In turn, the lawsuit argues the latest CMS guidance clashes with laws in the states participating in the lawsuit, including an Indiana law that bars government entities from requiring any individual to furnish proof of vaccination, and a Montana law prohibiting discrimination on the basis of vaccination status.