VAERS data released today by the Centers for Disease Control and Prevention included a total of 927,740 reports of adverse events from all age groups following COVID vaccines, including 19,532 deaths and 146,720 serious injuries between Dec. 14, 2020, and Nov. 26, 2021. 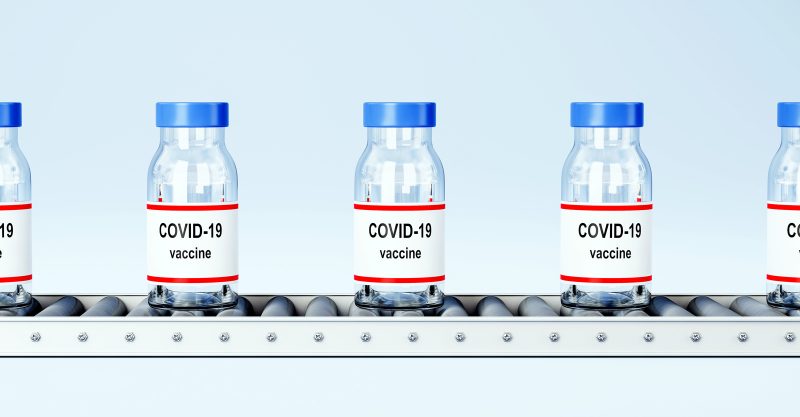 The Centers for Disease Control and Prevention today released new data showing a total of 927,740 reports of adverse events following COVID vaccines were submitted between Dec. 14, 2020, and Nov. 26, 2021, to the Vaccine Adverse Event Reporting System (VAERS). VAERS is the primary government-funded system for reporting adverse vaccine reactions in the U.S.

Foreign reports are reports received by U.S. manufacturers from their foreign subsidiaries. Under U.S. Food and Drug Administration (FDA) regulations, if a manufacturer is notified of a foreign case report that describes an event that is both serious and does not appear on the product’s labeling, the manufacturer is required to submit the report to VAERS. 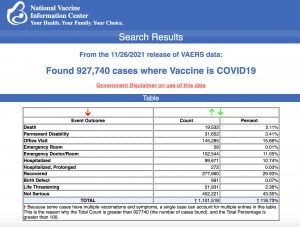 Every Friday, VAERS publishes vaccine injury reports received as of a specified date. Reports submitted to VAERS require further investigation before a causal relationship can be confirmed. Historically, VAERS has been shown to report only 1% of actual vaccine adverse events.

The second death (VAERS I.D. 1890705) occurred in a 5-year-old girl who died four days after receiving her first dose of Pfizer.

The most recent death involves a 16-year-old girl from Georgia (VAERS I.D. 1865389) who died reportedly from a heart condition and multi-organ failure two days after receiving Pfizer’s COVID vaccine.

As The Defender reported Dec. 2, several high-performing professional athletes are facing the end of their careers after COVID vaccines destroyed their health.

Florian Dagoury, a world record-holder in static breath-hold freediving, who once held his breath for a shocking 10 minutes and 30 seconds, was diagnosed with myocarditis, pericarditis and trivial mitral regurgitation after receiving Pfizer’s COVID vaccine.

Dagoury said he now struggles to reach an 8-minute breath-hold, feels an urge to breathe doing 40-minute dives, can’t keep his heart rate low and experienced a 30% decrease in his diving performance.

Veteran triathlete Antoine Méchin, 32, is also facing the potential end to his career after experiencing a pulmonary embolism after receiving Moderna’s COVID vaccine.

The symptoms, which included breathing problems and arm pain, started after the first dose, but doctors brushed off his shortness of breath as related to stress and fatigue.

Jeremy Chardy, a 34-year old professional tennis player ranked 73rd in the world, suspended his season due to a severe adverse reaction to a COVID vaccine, which left him unable to engage in intense activity.

Warner’s reaction was so severe that, as of October, he was still spending days in bed, overwhelmed by too much mental or physical exertion.

Adama Traore, 26, a winger for Sherriff Tiraspol, was seen clutching his chest as he slumped to the ground in the middle of the game as medics rushed to revive him. The reasons behind Traore’s collapse and why he was suffering from chest pains have not been confirmed.

​​Traore’s collapse occurred the night after another player, Sheffield United’s John Fleck, went down during a match against Reading. Fleck was taken off on a stretcher after receiving lengthy treatment.

When a radio pundit questioned whether Fleck had received the COVID vaccine, his live feed to the show was cut.

The article listed many recent cases of players who experienced heart problems or collapsed on the field — in some cases resulting in death.

Pfizer CEO Albert Bourla said in a tweet on Tuesday the pharma giant, along with BioNTech, formally asked the FDA to authorize COVID booster doses for 16- and 17-year olds.

If approved, the shot would be the first booster available to people under 18.

The FDA could approve Pfizer’s booster doses for 16- and 17-year olds as soon as next week, according to people familiar with the matter.

To help determine whether a correlation exists between COVID vaccines and myopericarditis, researchers tracked data from more than 268,000 adults in Massachusetts who received at least one dose of a COVID vaccine between August 2020 and May 2021.

The researchers compared the data to a control group made up of 235,000 of the same patients — from 2018 and 2019, well before they had received any doses of a COVID vaccine.

In a study published in the American Journal of Cardiology, the researchers found the age-adjusted incidence rate of myopericarditis in men was higher in the vaccinated than the control population, while the incidence rate of myopericarditis in women was the same between the vaccinated and control populations.

They also found an increased incidence of myocardial injury in both men and women in 2021 compared to 2019, although they suggested some of the apparent increase in the diagnosis of myopericarditis after vaccination may be attributable to factors unrelated to the COVID vaccines.

Moderna President Stephen Hoge said Wednesday boosters of its COVID vaccine targeting the Omicron variant could be ready for U.S. authorization as early as March.

Moderna is also developing a multivalent vaccine targeting Omicron and three other COVID variants, although the shot will not be available for several more months, Forbes reported.

March is the earliest date an Omicron booster could be approved under current FDA guidelines, though the company can start manufacturing the vaccine during testing.

Hoge said he thinks existing vaccines “will be able to slow down, if not completely stop, the Omicron variant.”

Children’s Health Defense asks anyone who has experienced an adverse reaction, to any vaccine, to file a report following these three steps.