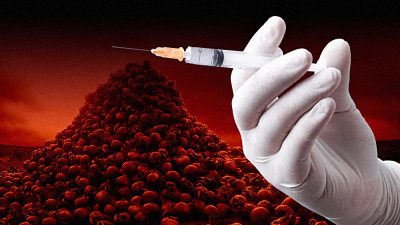 My name is John and I run my own funeral home in Milton Keynes – this is me www.mkffs.co.uk.

I have been a funeral director for 15 years, ten of those were spent with the cooperative funeral care and the last five I have been running my own funeral home.

During this time I spent 7 years working as a coroners removal man, dealing with the recovery of deceased on behalf of the coroner in my area which was Northamptonshire.

I write to you with very grave concerns around these Covid vaccinations and Covid generally, over the last 20 months I have seen a series of very disturbing patterns and patterns in death rates and circumstance’s surrounding Covid.

I have seen massive efforts made to deliberately inflate Covid death numbers by relabelling cancer patients and stroke victims and all manner of normal regular deaths as Covid, in fact virtually anyone getting into an ambulance, this effort has been deliberate and the methods used to do so were totally flawed, PCR tests for example being run on 45 cycles we all know to be worthless, yet people are being euthanised on this basis and sometimes only on the basis of a chest x-ray alone.

I have heard the first hand testimony from those involved, nurses on wards have told me directly this is happening.

I have seen many deaths in care homes, especially March and April of 2020 at a time that huge amounts of Midazolam were purchased and used and I suspect that there has been a campaign of unlawful killings in these care homes for some time, again labelled as Covid deaths.

There has been no doctor present, no police present and no Covid test present – yet they were all labelled as Covid deaths? Why is this and why is it being ignored?

Some pass away as little as a few hours after being injected and other up to 24 weeks after, the primary cause of death seem to be consistently thrombosis leading to heart attack or stroke.

Other deaths I see are shortly after a booster and consist of very sudden organ failure in previously very healthy people, people I suspect being damaged by these injections they are being scare-mongered, coerced and blackmailed into taking.

Now I know full well that coroners across the country will be seeing this and I question why alarm bells are not being raised, in fact I have had 80 other funeral workers in all positions, get in touch now to voice their own concerns as well as hundreds of families – but not a single coroner.

Why is this being ignored?

I know you guys are seeing this unprecedented thrombosis death rates, because I speak to a vast number of other funeral homes and these deaths will virtually all be in vaccine recipients.

I speak regularly to NHS Nurses and Doctors seeing this on their wards prior to these deaths and in fact one nurse told me of a ward with 12 patients with thrombosis in their arms – this is not normal, it’s criminal.

I write to you in the hope that these patterns will be acknowledged by you and addressed and that some effort will begin to stop what is happening as they target children in schools now, children not old enough to vote, drive a car, get married or place a wager, but apparently now old enough to be coerced behind their parents’ backs and without parental consent to consent themselves (illegally) to become part of an experiment using a gene therapy.

Prior to children being injected, not a single child to my knowledge had died from Covid and again I have spoken to many other funeral homes globally to confirm this – they are dying now in numbers after these injections Sir and death rates in teenagers are on the rise, again you will be aware of this.

I have seen video testimony from one headmaster who explains he now has 14 of his pupils off and very ill after these injections, that is in a single school.

I also find a growing number of people coming into my funeral home very upset and the medical neglect they feel they have suffered over the last 20 months as GP’s work from the comfort of their sitting rooms, earning far more money NOT seeing patients and I can go into great detail about this, but I am sure you are aware of it.

As a man with a moral compass I want this to stop, Sir, and I’d like to think you feel the same way – it has to stop.

On September 21st 2021 I met with Sir Graham Brady from the 1922 committee in a meeting in Birdcage Walk, Westminster.

We sat with Sir Graham and at least 16 of the very scientific and legal minds, it was disappointingly reported as a group of “anti vaxxers” in the times.

Let me be clear Sir that when you have the calibre of people like Dolores Cahill in a room that is anything but the truth.

Dolores is a wonderful woman who was advising the British government in her twenties, she has been in charge of running level 3 bio labs and has worked in level 4 bio labs. My point is this, she has built her career on vaccines, she is anything BUT anti Vax.

The room was full of people of the same calibre, myself excluded of course, people who actually care about human life and are experts in their respective fields.

We all gave testimony in our respective fields about out concerns and the science was delivered in heaps of papers submitted to him.

Sir Graham knew what we were saying was true and he left making no promises and nothing has changed.

There are grave concerns over cardio inflammation and sterilization in children receiving these injections – those concerns were raised, nothing has changed and we now see deaths in those children across the country.

I am sure that the people included in this email would be happy to support my concerns and supply with scientific data and credible evidence if asked to do so.

I look forward to hearing from you and I hope that you do what is right, please Sir will you engage with us to stop this madness before humanity is ruined.

I have CC’d in a large number of very well respected people into this email, people you will know, well respected and well qualified people, people who all feel the same way as me to see if we can collectively save lives instead of destroying them and ignoring it happening.

Please find below an interview I did recently raising my worries and consider this my evidence to you.

I write to you in the hope you are a force for good and i worry that I now conduct many funerals for people who are being unlawfully killed sir and this is why I speak out – and I am being joined daily by thousands who feel the exact same way.

Can you help us save lives please ? Children’s lives.