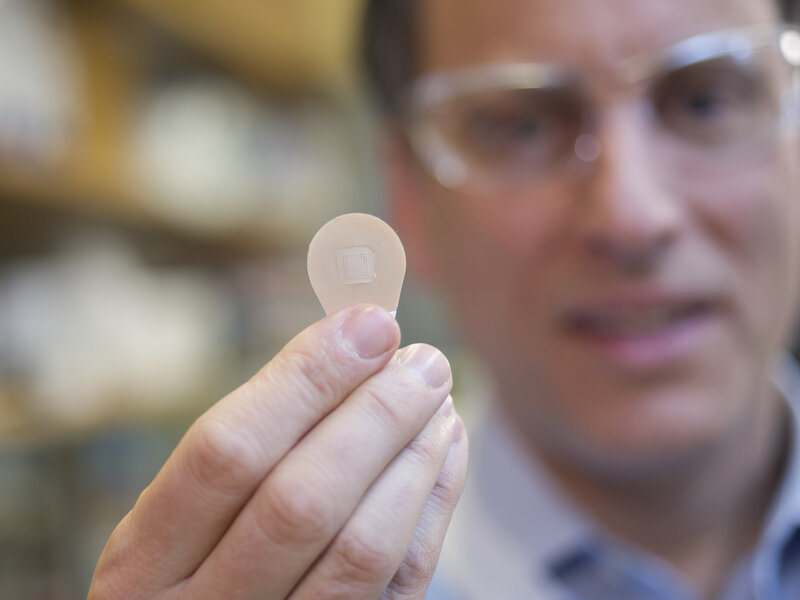 Mark Prausnitz, Georgia Tech Regents’ professor in the School of Chemical and Biomolecular Engineering, holds a vaccine patch containing microneedles that dissolve into the skin.

It’s the rare individual who actually looks forward to getting jabbed with a needle, even if what’s in the needle can protect them from a serious disease such as COVID-19.

But several teams around the world are working on a way to inject a vaccine without the ouch. The trick is to make the needles small. Really small. So small they don’t interact with the nerve endings that signal pain.

Mark Prausnitz is director of the Center for Drug Design, Development and Delivery at Georgia Tech. He works on something called microneedle patches to deliver vaccines. So far, he’s developed patch vaccines for flu and measles, but the technology could be used for a COVID-19 vaccine as well.

You do feel something when the microneedles are pressed against your skin. “Like if someone took some Velcro and pressed that firmly against your skin,” Prausnitz says. “There’s a kind of a roughness. Some people may describe it as a kind of tingling. So there is a sensation, but it’s a sensation that people don’t find objectionable or painful.”

Prausnitz says the microneedle patch is an offshoot of the computer chip industry. Chipmakers got really good at making tiny structures out of silicon.

“They got smaller and smaller and eventually got down to the micron scale, which is what we need to make the microneedle patches,” Prausnitz says.

Turns out your skin is a pretty good place to deliver a vaccine. It’s full of immune cells. The outermost part of the skin called the stratum corneum consists of a layer of cells thinner than a sheet of paper.

“So in principle, if you want to get into the body across this barrier layer of the skin, you don’t need something that measures millimeters and then centimeters long, like conventional hypodermic needles,” Prausnitz says. “You need something actually very short, just tens of microns in length.” 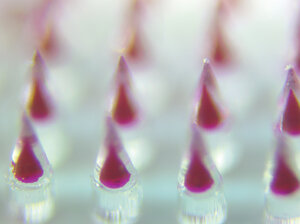 Microneedles that can carry vaccines are part of a patch developed by Thanh D. Nguyen’s lab at the University of Connecticut.

Those tiny needles are now frequently made out of water-soluble materials, so once they get into your skin, they dissolve, releasing whatever you’ve packed inside of them.

“The microneedle patch technology, the advantage of it, it’s just it’s so easy to use,” says Nadine Rouphael, director of the Hope Clinic at Emory University. “You can give the vaccine to yourself and it doesn’t hurt.”

She’s worked with Prausnitz in developing the flu vaccine delivered by microneedles.

“The other wonderful things is the fact that the vaccine and the microneedle patch is very stable, no matter what the temperature outside is,” she says.

That would make getting vaccines to remote places much easier.

Thanh D. Nguyen, an assistant professor of engineering at the University of Connecticut, is developing a way to make delivering vaccines easier still. He’s made a patch that could deliver multiple vaccine doses spaced days or weeks apart with a single application. The trick is to imbed the vaccine in needles that dissolve at different rates.

So with all these promising applications, why are there no vaccines delivered by microneedle patches on the market?

Darin Zehrung, program leader for medical devices and health technologies at the global health organization called PATH in Seattle, says the answer is clear: “What’s needed is the commitment by industry to that as a particular product.”

Zehrung says for vaccines and other medical applications, there are still questions about just how well the patches will work. Initial studies are encouraging but not definitive. Then there are questions about whether they can be manufactured at scale, at reasonable cost.

Zehrung has been banging the drum for microneedle patches for 15 years, largely because he thinks they would provide a better way to distribute vaccines globally. He says the COVID-19 pandemic has brought renewed interest.

“I’m more optimistic than I have been in the past,” Zehrung says. “We’re getting closer.”

The world would be the beneficiary if he’s right.