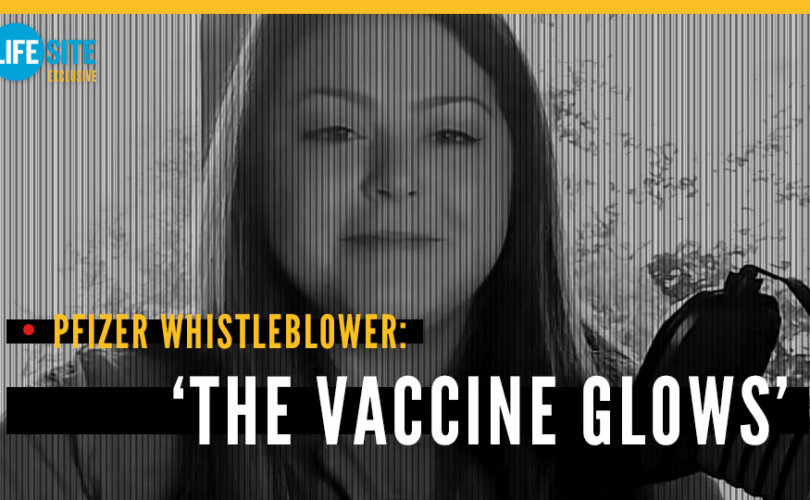 “The vaccine glows, at least Pfizer’s does,” Melissa Strickler, who worked for the pharmaceutical giant for nearly 10 years, said. “It looks like someone took a blue glowstick, cracked it open and put it in the vial, but only if there is light and it is around a dark background.”

Strickler, who worked at Pfizer’s large McPherson, Kansas plant, said she has inspected “hundreds of thousands of units” of vaccines in her career at the company “and never once seen anything do that, not even close.” Usually, the fluid in vials are clear like water, she said, but she photographed vials when she noticed the blue fluorescent tinge to the fluid and inquired about the ingredient to superiors.

Luciferase not on the label

Strickler said she heard a doctor describe codes for ingredients in the vaccines, including the codes SM102 for luciferase, a glow-in-the dark enzyme produced in fireflies, plants and fish that is used in bioluminescence research. Depending on different chemicals that it is mixed with, luciferase will glow different colors.

A bright blue luciferase was identified in a report in the journal Nature Scientific Reports in 2020, for example, and is only visible under UV lights of certain wavelengths.

Strickler told LifeSite that she emailed the company and asked if luciferase was in the Covid vaccine and was told that it was “only used in the testing of the vaccine,” but would not be included in the final product. “But the way I see this is the whole thing is experimental,” Strickler said.

“We haven’t even seen the Comirnaty labels being put on the vials in that plant yet,” Strickler said, referring to the tradename for the vaccine that the Food and Drug Administration approved in August. “As far as I know, everyone is still receiving that Emergency Use Authorization” original product.

In an explosive interview with Project Veritas made public last week, Strickler revealed insider Pfizer emails from high-level employees directing lower- level workers to not discuss the role of aborted fetal cells in the development of its Covid shots with the public.

Vanessa Gelman, Pfizer senior director of worldwide research, sent an email to an employee asking how to respond to a question about the use of aborted cells in its Covid vaccine.

“From the prospective of corporate affairs we want to avoid having the information on fetal cells floating out there. The risk of communicating this right now outweighs any potential benefit we could see, particularly with general members of the public who could take this information and use it in ways we may not want out there,” the email stated.

Other emails from Pfizer vice president and chief scientific officer Philip Dormitzer discussed the role of human embryonic kidney cells (HEK 293 cells) harvested from an aborted baby girl in 1973 and reproduced in a continuous line of cells used in the production of Pfizer’s Covid shot.

Strickler said the cells were chosen because of their ability to grow and are basically “cancerous cells” from an aborted baby.

“It made me sick to my stomach because, if they’re going to lie about something like this, what else?” Strickler remarked. “It’s actually one of the things that if the public knew, they definitely would care.”

Thousands of people have sought exemptions from workplace Covid vaccine mandates on grounds of religious or conscience exemptions citing the use of fetal cells in the development of Covid vaccines and have been denied their requests. Social media platforms have routinely deleted posts about fetal tissue in Covid vaccine development and mainstream media have “fact-checked” reports as “misinformation.” Strickler said that Pfizer knows this.

“They’re just simply being deceitful. I mean, they could end the conspiracy theories, they could correct the fact-checkers on social media and they remain silent because they know if they do say, ‘yeah, we did use fetal cell lines in the development of this,’ they know that they’re not able to deny the religious exemptions. I think that’s what it’s about.

“It’s wrong in my opinion to benefit from an abortion. I don’t think God would want us doing those things. But it goes deeper than that as to public deceit and they’re trying to give it to children.”

“I thought all this stuff was conspiracy things,” Strickler told LifeSite reporter Jim Hale. She described the deceit from Pfizer as “endless,” however. “I don’t think they’ve been honest about a single thing about this vaccine other than it’s experimental. And that it’s mRNA technology.”

She added that the mRNA technology of the vaccines could be used with CRISPR technology for gene editing and that fact is also being obscured to the public in messages from Pfizer, the mainstream media and government.

Strickler said that before Covid she had enjoyed her job as a product inspector but that since the pandemic began many employees have “vaccine regret” after getting the shots and “a lot of people refused to get it. In fact, over half of the employees are willing to walk out over this and Pfizer knows that.”

Strickler compared the drug giant with an “abusive, rich husband.” She said the company offers excellent benefits and pay, “but they don’t exactly treat you the best in the sense that they don’t seem to value all their employees equally.”

She described frequent “virtue signaling” emails sent to employees, including one proclaiming Pfizer CEO Albert Bourla “Father of the Year.”

Strickler said she had often wanted to quit after Covid vaccine manufacturing began at the McPherson plant and had prayed about it, but felt compelled to hang on, until she discovered a database of explosive and deceitful company emails that she eventually exposed to Project Veritas.

After the exposé aired, Strickler received a phone call from an employee at Pfizer telling her not to come to work again and a letter from the company confirmed that she was fired.

LifeSite is joining Veritas in raising funds for Strickler in recognition of her bravery in speaking out in defense of truth.