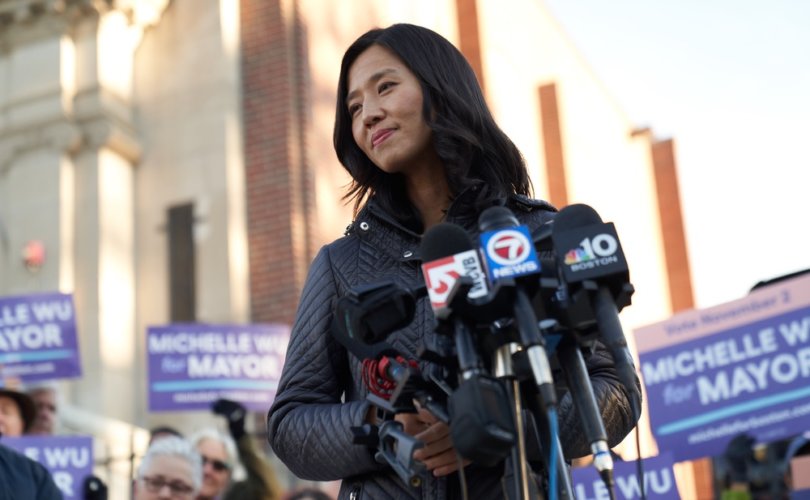 The lawsuit came after Chambers had sent a letter to Wu 10 days earlier “asking her to work within the law,” to which he received no response.

In its press release MAFA, a nonprofit dedicated to putting American citizens back “in charge” by pushing for an end to coercive COVID mandates and restrictions, congratulated both Chambers and the Massachusetts chapter of the MAFA group for “helping” Mayor Wu “to understand that illegal actions have both political and personal consequences.”

According to MAFA, ‘[t]he suit concerned the unlawful orders issued in December 2021 requiring vaccine passports for admission to ‘indoor entertainment, recreation, dining, and fitness settings’ in the city of Boston.”

The press release noted that the legal filing had “asked the court for ‘immediate, preliminary and injunctive relief’ from these unlawful orders,” and even called for “a jury trial to determine monetary damages.”

Mayor Wu announced the vaccine passport scheme would be scuttled on Friday, just five hours after the filing was submitted.

MAFA has hailed the removal of restrictions as a win for their group, arguing that when Wu was “faced with the potential for personal financial responsibility for the damages her orders would cause to local businesses, she quickly changed course.”

It’s unclear whether Wu was pressured to lift the coercive mandate in response to the federal lawsuit or whether she had already planned to scrap the requirement.

For her part, Wu credited high vaccine uptake and low hospitalizations for the shift.

Calling the rollback a “win for every Bostonian who’s done their part to keep our communities safe,” Wu asserted in a press release Friday that “[t]he public health data shows that we’re ready to take this step in our recovery.”

The Associated Press reported that Wu had previously said the discriminatory rule would be dropped “when the community positivity rate fell below 5%, fewer than 95% of ICU beds were occupied and the seven-day average of COVID-19 hospitalizations fell below 200 per day,” conditions Wu said have now been met.

“This news highlights how much progress we’ve made in our fight against COVID-19 thanks to vaccines and boosters — which have always been our most effective weapon against the pandemic,” Wu said in her February 18 statement.

Wu’s comments come in spite of the fact that COVID jab efficacy has nosedived over time, while public health authorities including U.S. Centers for Disease Control and Prevention (CDC) Director Rochelle Walensky have acknowledged since last year that the shots don’t stop transmission of the virus.

The CDC also drew backlash this week when officials acknowledged they were withholding data related to the efficacy of booster shots for younger age categories, citing fears that the data might be “misinterpreted” and that people would believe the shots were ineffective.

Instead, the group hopes to prove the measures enacted by Mayor Wu violated the U.S. Constitution in an effort to prevent similar restrictions from being implemented in the future.

“Our lawsuit asks the court to find that the statutes which were relied upon to issue the orders are unconstitutional and invalid because they are broad and ambiguous; and also to declare that the creation and existence of the Board of Boston Public Health Commission is unconstitutional because it was not created by Boston City Council,” the press release states.

“In other words, we are asking the court to ensure that this illegal activity can never take place again!” the group said.

News of the reversal of Boston’s vaccine passport scheme comes as Mayor Wu, who took office in November, 2021, has been met with widespread pushback for her stringent COVID policies. During her December announcement of the vaccine passport rule she was met with boos and jeers from opponents of the measures.

Weeks later, a February livestream in which Wu planned to answer questions from constituents was derailed when countless commentators joined the chat to demand a lifting of crushing restrictions and mandates.

Wu’s COVID stance has contrasted sharply with that of her predecessor, Democrat Mayor Kim Janey.

Last year, Janey blasted COVID vaccine passports as being reminiscent of America’s history “of people needing to show their papers” in the context of slavery and segregation.