Note: Australia’s horror flu season has claimed another life or has the failed & potentially deadly flu jab claimed another life? The woman died of the flu despite being vaccinated against it with a flu shot? I will put money on the simple fact that if Ms Thew had not received any flu shots but had suffered from the same flu she would still be alive today. This is outright murder & will the manufacturers of the flu vaccine that killed this woman be investigated? of course not.

Mother-of-two Jennifer Thew, from the ACT, died from respiratory distress syndrome at the weekend.

Ms Thew and her seven-year-old daughter had reportedly been sick with the flu virus for a week.

The Canberra woman worked as a medical receptionist and had been vaccinated against the flu, News Corp reported.

A GoFundMe page was set up for the family by GDANCE, an organisation Ms Thew was a member of.

Estella Thew is one of our beautiful students in Primary,” the page reads.

“Her mother Jen, was a cherished member of the GDANCE community and recently passed away unexpectedly due to complications from influenza. 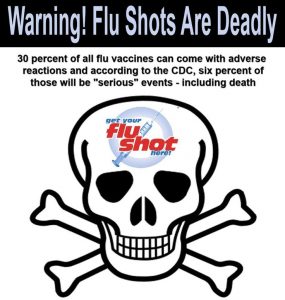