OLIVIA Odey was a healthy and active girl when her body went into complete haywire, three years ago.

Suddenly, food allergies, shingles, lethargy and ‘extreme pain’ overwhelmed the 16-year-old, at a time when she was supposed to be in her academic and physical prime.

Instead of early starts to water ski with her family, the Year 12 school student was in so much pain she couldn’t shower, because her skin felt like it was searing under the water stream. 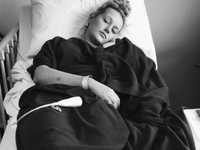 The date of February 4, 2015, is permanently etched in the mind of Ms Odey, marking the beginning of her journey.

She’s sharing her story with The Northern Star ahead of the launch of her health blog and moving to Byron Bay from Brisbane in October.

“I was at school and I started to feel like I couldn’t breathe … (it) scared me because I had no idea what was going on.

“I went to stand up and that was when I realised, I couldn’t.

“From this moment on everything happened so quick. My friends carried me to the car and my mum took me to the local hospital.”

Doctors had no answers.

All the tests came back normal.

Ms Odey was sent home with a wheelchair and assurances that “it will just get better with time”.

In and out of hospital for the next eight months, Ms Odey said she endured a “frustrating battle with the conventional medical system”.

“They wanted to send my mum and I across the road to a mental institution and told me ‘if there was a fire you would run right out of here’.

“I was scared and I was losing hope,” Ms Odey said.

“What did they expect me to do? Just adjust my life to suit being in a wheelchair with extreme pain and tingling and just sit around and wait for the possibility that it might just ‘get better’?.”

The cardiologist ruled out a heart condition and referred Ms Odey to a specialised pain doctor.

“Within one hour I was diagnosed and by the next day he had organised treatment,” Ms Odey said.

Her nervous system interpreted signals sent through her body as pain messages.

“I knew I would walk again and I wasn’t going to give up until I did,” she said.

“Taking my first steps unassisted again was a feeling I don’t even think I can put into words.

“Leaving the rehab centre I was able to walk however still had a very obvious limp and was relying on my medication.”

To come off the pain drugs Ms Odey did a three-day course on how to “retrain your brain pathways and change your physiology just by changing your thoughts and beliefs.”

That is, therapy based on neuroplasticity.

“By day three I was walking completely straight and could practise strategies to keep on top of my pain just through what I thought in my mind.

“Leaving there with a change in beliefs and a whole new perspective I was able to get off all of my medication within a few months.

“Now two years later I am stronger and fitter than I have ever been in my life – both physically and mentally.”

Ms Odey is grateful for her mother’s help.

“I am so lucky that my mum took a stand, she knew this wasn’t me and she devoted everything to pushing for answers and a way out of this.

“She assured me every single day that I would get better and I would walk again and she never let any bit of doubt enter my mind.”

Ms Odey believes her symptoms were linked to a reaction to the Gardasil vaccine against cervical cancer, which the teenager had a few weeks prior to the onset of her symptoms.

The 18-year-old reported her injury to Gardasil.

“I definitely think there was a link, but there’s no way to prove it,” Ms Odey said, admitting the proposition was controversial and “brushed aside by medical professionals”.

According to the Australian HPV vaccine website, for every million doses of the vaccine given there are only around three serious allergic reactions.

In the US, from 2006 to 2016, about 79 million doses of Gardasil were distributed and during the same period, 33,945 reports of adverse events were reported in the US.

US Health authorities state “any medicine or vaccine can cause adverse events, and (as with any vaccine or medicine) it is difficult to determine whether or not the HPV vaccine caused a particular adverse event.”

There have been class actions suits against Gardasil overs its HPV vaccine in Ireland, the US, Australia and China, with young women experiencing similar symptoms to those of Ms Odey.