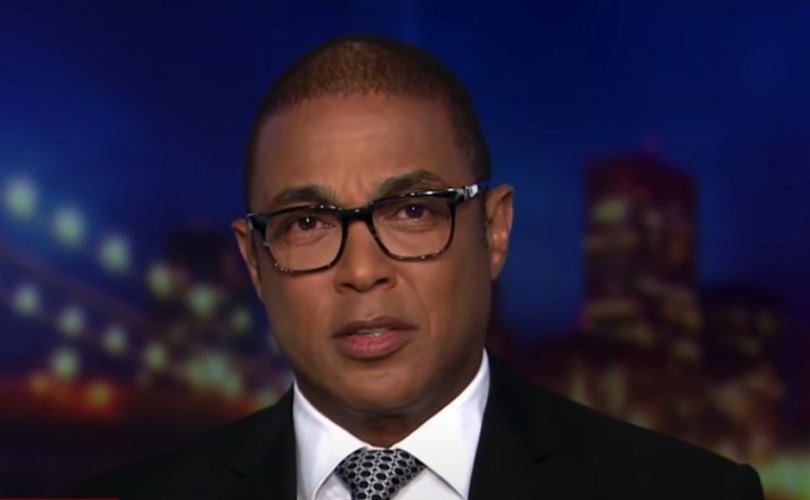 NEW YORK – (LifeSiteNews) On Tuesday, homosexual CNN anchor Don Lemon opened his show “Don Lemon Tonight” by going on a tirade against the unvaccinated, suggesting hospitals should only treat the vaccinated.

“I know that sounds harsh,” he added, “but you’re taking up space for people who are doing things the right way.” Lemon’s statements also mentioned restricting medical treatment for those who do not “wear a mask,” a concept that is scientifically unsupported by peer-reviewed research that concluded masks provide no statistical significance in reducing the transmission of COVID-19.

Don Lemon’s statements of disdain for the unvaccinated, which are not supported scientifically, morally, or legally, also are in contrast with his advocacy regarding medical treatment of homosexual men during the HIV/AIDS crisis.

In a CNN segment titled “How AIDS shattered the silence about gay lives,” Lemon expressed his opposition to “medical discrimination” for those who contracted HIV through homosexual acts.

“People were fed up with being denied ‘partner health benefits,’” said Lemon

“The community [homosexual males] endured one of the most significant backlashes during this time period [the AIDS crisis],” he continued.

The Centers for Disease Control and Prevention, lists homosexual “intercourse” as one of the largest risk factors for contracting the deadly virus, and demographic data shows that “gay and bisexual men” make up 69% of new HIV cases despite being 2-3% of the male population. Homosexual behavior is scientifically linked to transmission of HIV – a virus with a mortality rate exponential higher than the 1% death rate of COVID. Remaining unvaccinated, however, is statistically irrelevant in the spread of COVID-19.

Dr. Peter McCullough – a leader in early treatment for COVID-19 – told LifeSite five science-based points the public needs to be aware of regarding COVID-19 lies proliferated from the mainstream media:

In regard to point five, the basis for Don Lemon’s medical discrimination advocacy, McCullough said “Patients are failing on these vaccines. They’re being hospitalized and getting sick despite having had the vaccines.”

“The vaccines at this point in time have amounted to record mortality and injury and should be considered unsafe and unfit for human use,” continued the doctor.

Don Lemon’s statements promoting medical discrimination are also at odds with the U.S. law, which prohibits discrimination at the hands of healthcare providers and medical professionals on the basis of an individual’s religion.

On moral grounds, Don Lemon statements go against authentic Christian teaching in regard to unjust discrimination, as well as the voluntary nature of vaccines. As promulgated by the Catholic Church, vaccines are “not morally obligatory,” and in instances in which a vaccine was developed using aborted babies, as is the case with the COVID-19 vaccines, there is a moral duty to avoid such treatments. Discriminatory denial of necessary treatments also violates Church teaching.

The CNN anchor’s statements are part of a growing trend among news media outlets to incite animosity against and scapegoat the unvaccinated. Last week, Canada’s largest newspaper, the Toronto Star, published vitriolic comments toward the unvaccinated, such as “Let them die,” on the front-page of their paper.