Harvey dropped over 25 TRILLION gallons of water in Texas and Louisiana. The immensity of water volume carried in our warming atmosphere by massive storms like Harvey is truly difficult to even comprehend. Are power plant cooling towers really being covertly used to supply the moisture for weather systems? Even for hurricanes? Is this mathematically possible? Deluges and catastrophic floods are increasing all over the globe, what are the primary factors? Numerous activists have requested me to address the facts just mentioned, the 10 minute video below is my answer.

Though the water vapor emitted from cooling towers can and does create cloud formations under the right conditions, this is a very different issue as compared to the primary mechanisms of Earth’s atmospheric water vapor generation for fueling storms. More evaporation from a warming planet and warming seas (which climate engineering is making worse overall, not better).

GeoengineeringWatch.org reached out to a cooling tower industry expert / contractor for his opinion on this issue, his statement is below:

Cooling towers do not add excessive amounts of water vapor to the atmosphere, in fact that form of technology has greatly diminished over the last two decades. Evaporative cooling of water to in turn cool machinery has high maintenance costs, looses expensive water and chemical additives, plus is a potential source of Legionaries disease where in many metropolitan areas monthly testing in mandatory.

Advances in mechanical refrigeration have rendered cooling towers obsolete except in major power plants. New refrigerants that are ozone  friendly, which are also up to 25 percent more efficient in their heat exchange capacity, coupled with larger condensers, micro electronic controls, and advances in compressor technology have replaced evaporative cooling towers in nearly all cases of new buildings and as old towers fail they are either eliminated or replaced with closed loop or just more efficient versions such as dry coolers.

Having spent over 30 years designing, installing, repairing and maintaining industrial manufacturing and power generation heating and cooling equipment I can state with complete authority, the argument of cooling towers adding significantly to atmospheric moisture is either misinformed, misinformation, or both.

Was a consultant to the EPA on regulations concerning ozone depleting chemicals in the 1990’s.

The sources who claim “power plant cooling towers are supplying all the moisture for clouds and storms” (even hurricanes over the ocean) often refer to patent # US 20100074390 A1 as proof of their claims. 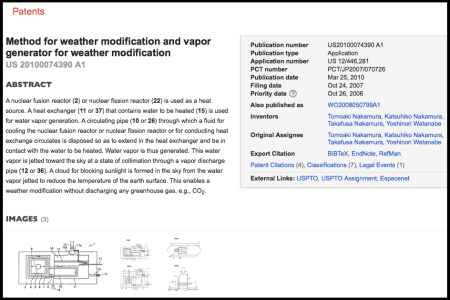 But what is the real purpose of this “vapor generation” patent? The two excerpts below have been taken from the patent in question.

A cloud for blocking sunlight is formed in the sky from the water vapor jetted to reduce the temperature of the earth surface. This enables a weather modification without discharging any greenhouse gas, e.g., CO2.

How much power is required in order for this patent to even be feasable?

Are there any existing facilities that have actually been constructed according to this patents design? None known. To be clear, this patent outlines a potential process to create artificial cloud cover, it does not claim the ability to function as a primary water source for producing precipitation.

The fight to expose and halt the climate engineering assault is the most critical battle we face. If we are to have even the slightest chance of prevailing, credibility is crucial. We must all investigate before coming to conclusions in order to ensure any information we share is actually credible.