Authored by Lily Zhou via The Epoch Times,

Vaccinated people infected with the Delta variant of the CCP (Chinese Communist Party) virus, which causes COVID-19, may be as infectious as their unvaccinated counterparts, early analysis from Public Health England (PHE) suggests.

This coincides with a recent study from the United States, where similar results were observed in Wisconsin. 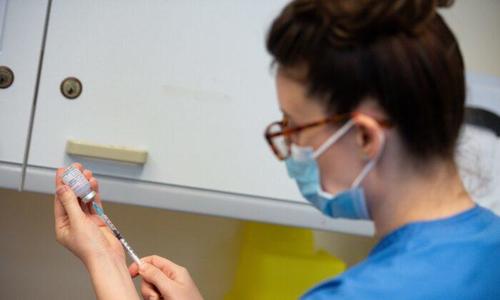 “Some initial findings … indicate that levels of virus in those who become infected with Delta having already been vaccinated may be similar to levels found in unvaccinated people,” PHE said in a statement.

“This may have implications for people’s infectiousness, whether they have been vaccinated or not,” it added.

“However, this is early exploratory analysis and further targeted studies are needed to confirm whether this is the case.”

The Delta variant, first identified in India, is currently the dominant CCP virus variant in England.

In a technical briefing (pdf) published on Friday, PHE said that NHS Test and Trace case data shows that since June 14, where cycle threshold (Ct) value data are available, the mean and median lowest Ct values are similar between vaccinated and unvaccinated people with the Delta variant, “with a median of 17.8 for unvaccinated and 18.0 for those with 2 vaccine doses.”

Ct value is the number of cycles needed to boost the viral signal in a sample when conducting an RT-PCR test.

The non-age-stratified data indicates that “whilst vaccination may reduce an individual’s overall risk of becoming infected, once they are infected there is limited difference in viral load (and Ct values) between those who are vaccinated and unvaccinated,” PHE said.

“Given they have similar Ct values, this suggests limited difference in infectiousness,” the document reads, adding that test-seeking behaviour and true changes in the data such as the age distribution of cases can influence the findings.

A recent study from Wisconsin, the United States observed a similar result.

The preprint of the study, which is not yet peer-reviewed, said “no difference in viral loads” was found when comparing unvaccinated individuals to those who have vaccine “breakthrough” infections, and that “individuals with vaccine breakthrough infections frequently test positive with viral loads consistent with the ability to shed infectious viruses.”

However, these findings contradict the findings of another recent study by Imperial College London (ICL).

The ICL led REal-time Assessment of Community Transmission study-1 published the preprint of its latest report, which said among all positive tests, the median Ct value (the number of cycles needed to boost the viral signal) was 27.6 for vaccinated participants, and 23.1 for unvaccinated participants, suggesting vaccinated people are less likely to pass the virus on to others.

Vaccines ‘May Be Less Effective’ Against Lambda Variant

In a separate statement, PHE said that “there is preliminary laboratory evidence to suggest that vaccination and previous infection may be less effective at preventing infection” with the Lambda (B.1.621).

“However, this data is very limited and more research is required. There is no evidence to suggest that [it] is more transmissible than the dominant Delta variant,” it added.

According to PHE, England has 37 confirmed cases of the Lambda variant.

In a new risk assessment (pdf), PHE said that while there’re no real-world data on vaccine effectiveness against the variant, pseudovirus data from the UK indicates it may evade vaccine-derived immunity.

Case numbers in the recently wave of infections peaked at a similar level to those seen in January, but the numbers of hospitalisations and deaths were far lower than those of the last wave.

There is currently no long-term data on the effectiveness and the safety of the vaccines.