A devastated daughter has been forced to farewell her beloved dad over FaceTime after she got stuck in hotel quarantine in Sydney.

Gillan Hannah, who lived in Madison, Wisconsin, immediately returned to Australia after hearing news her father’s lungs were shutting down.

She is fully vaccinated and has tested negative to Covid-19 twice since arriving in Australia, however her application for a compassionate exemption to travel from Sydney to Melbourne to see her dad in hospital was denied. 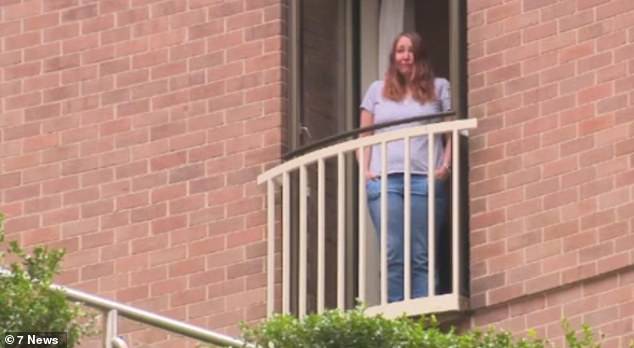 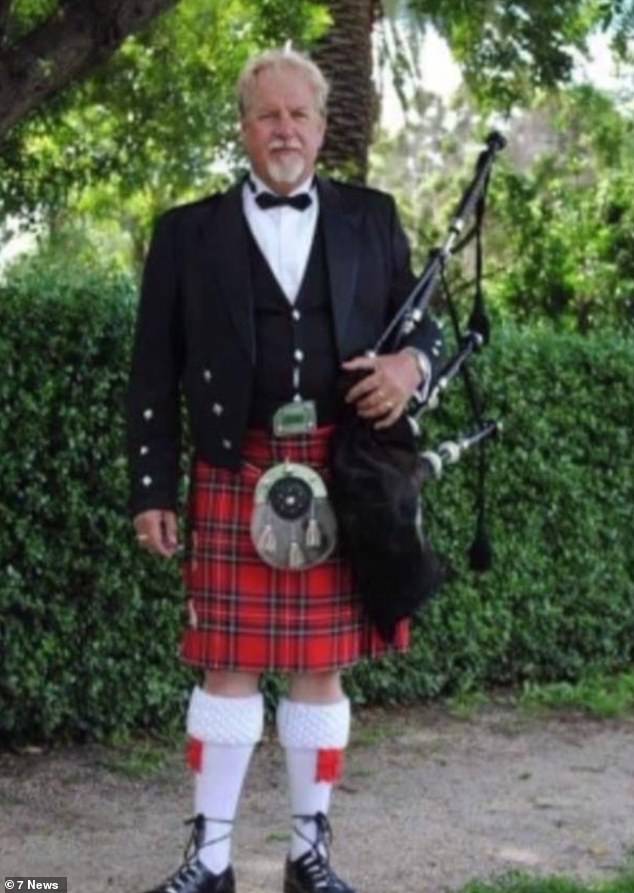 ‘I just FaceTimed him. He’s on a lot of medication and he sort of knew who I was but it was vague,’ she told 7NEWS after her father died on Thursday morning.

‘I said what I needed to say and that’s the last moments I get with him.’

Just hours later her father passed away, leaving his daughter only with memories of a remote communication.

Ms Hannah had been advised she could charter a plane to Victoria but was not allowed to travel on a regular flight with other passengers.

‘I asked if I could drive down and they said absolutely not, we would never approve that.’

The heartbroken daughter posted a photo of her father on Facebook, with friends and family sharing their condolences in the comments.

‘I’m so sorry you were prevented from seeing your dad by heartless bureaucrats. Someone had the power and they have utterly failed you and your family’, one said.

‘I am devastated for you Gil. I don’t even know what to say. No words can make this situation any better’, another wrote.

‘This is beyond heartbreaking, I am so sorry you didn’t get to kiss you dad goodbye – a simple wish you weren’t granted’, a third commented. 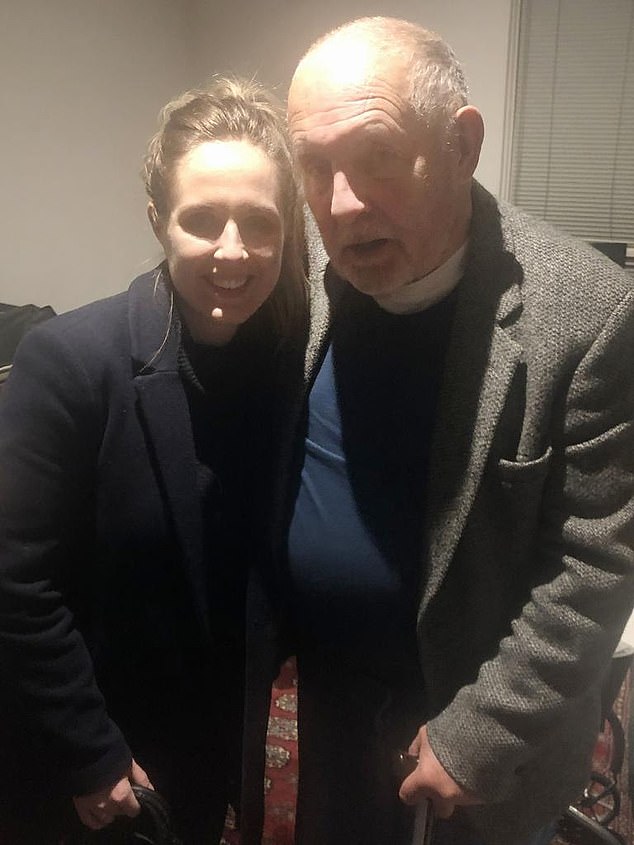 Anna Coffey, 32, (left) flew to Sydney from New York last week after her 80-year-old father John (right) suffered a stroke and went into palliative care in a Melbourne hospital. 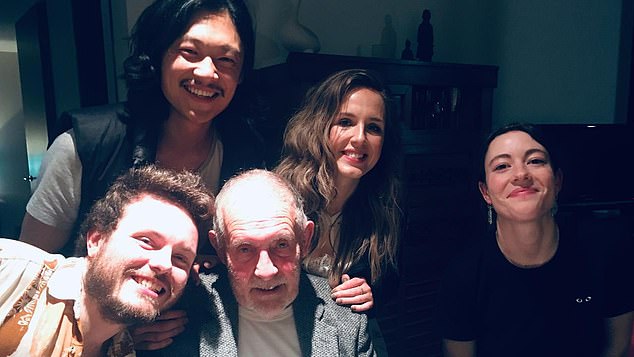 But Angel Flight Australia, a charity involved in co-ordinating non-emergency medical flights, offered to pay for her flights to Melbourne – reuniting Ms Coffey with her dying dad

Ms Hannah’s story came soon after another US-based Australian was finally reunited with her dying dad after a charity offered to pay for a charter flight.

Anna Coffey, 32, flew to Sydney from New York last week after her 80-year-old father John suffered a stroke and went into palliative care in a Melbourne hospital.

The Columbia Business student was fully vaccinated against Covid-19 and tested negative to the virus but did not receive exemptions from NSW and Victoria health departments.

NSW Health told her the ‘travel time’ by car to Melbourne was too far – as she would need to stop to refuel and eat – and she would instead be forced to shell out $7,500 for a private plane. 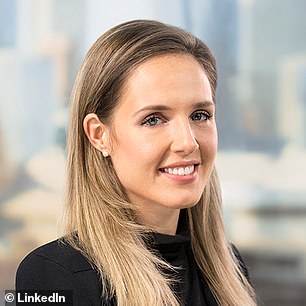 ‘The difference in your situation is that the travel time by road from Sydney to Melbourne is approximately nine hours plus stops and you would need to travel through both NSW and Victoria,’ an email from NSW Health said.

The health department said while they understand her situation was ‘upsetting and stressful,’ the stringent quarantine measures were in place for the ‘protection of the community’.

‘These issues are handled as personally and as sensitively as they can be, but there are rules further down the line where public servants apply the rules, and then we try and find the flexibility,’ Mr Hazzard said.

‘We’ve asked our officials to look at it, and we’ll deal with it sensitively and as carefully as we can, and while also keeping the community safe.’

Ms Coffey, who hasn’t seen her family since the start of the pandemic, called the restrictions ‘inhumane’ with compassionate exemptions only granted for the rich. 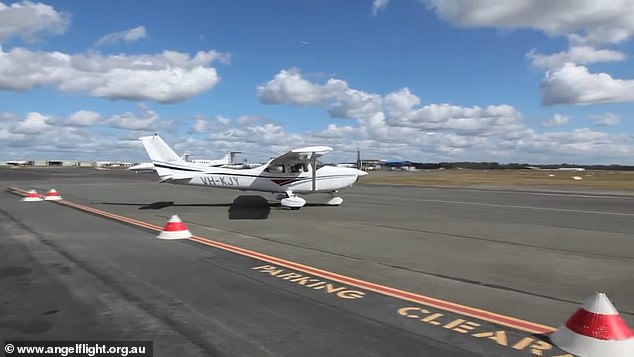 But Angel Flight Australia, a charity involved in co-ordinating non-emergency medical flights, came to her rescue in a plan confirmed on Tuesday night.

She was released from hotel quarantine at about midday on Wednesday and landed at Essendon Airport in suburban Melbourne later that afternoon.

Ms Coffey had feared she would not make it to Melbourne in time to be reunited with John if she was forced to complete the required 14 days in Sydney quarantine.

Although it is the other way around in this case, Chief executive Marjorie Pagani immediately recognised she fit the criteria to be offered a compassionate flight.

‘This young lady has already spent a fortune getting home to Australia and then to be asked to find another $7000 to $8000 is a lot,’ she said.

‘I’m so glad we could help out and get it done so quickly.’ 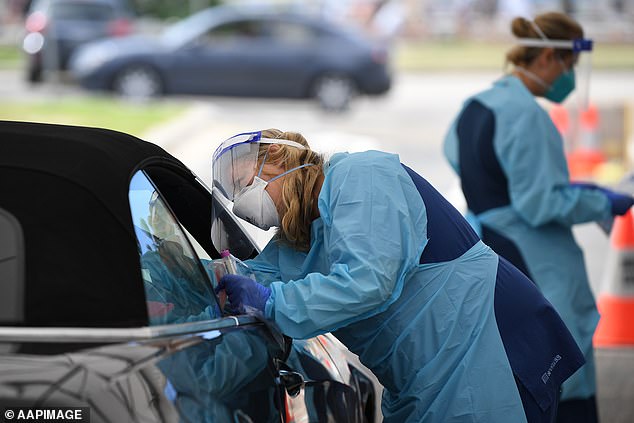 Of hearing of Ms Coffey’s heart-wrenching ordeal, Prime Minister Scott Morrison expressed his sympathies in a letter and said he hopes a ‘solution can be found’.

‘To be so close to home but to still be so far away from being able to see your father must be heartbreaking,’ he said.

‘I farewelled my own father last year and I know how important those last moments are.’

Mr Morrison, who has no control over state quarantine policies, is now reaching out to the Australian Health Principal Protection Committee to draw up a more consistent plan to deal with compassionate exemptions for those blocked from seeing critically ill loved ones.

Last week, US citizen Mark Kilian was reunited with his dying father at a Gold Coast hospital after spending eight days in quarantine and hiring a $15,000 chartered jet to fly up from Sydney.