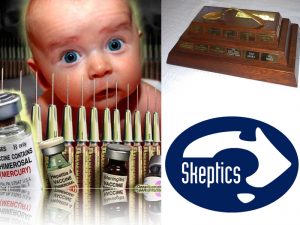 Christine Bayne, who, back in 2010, implored her Twitter followers to “put a bullet” in AVN founder Meryl Dorey’s brain has taken out the Australian Skeptics top award at Skepticon.

In an attempt to avoid responsibility for those tweets, Christine Bayne made her tweets private for that Twitter account shortly after she posted them in 2010.  Her main Twitter handle currently is @DilutedThinking but there are others.

It is always a great source of amusement when the deceptively named Australian Skeptics hands out awards to its own for seriously questionable, if not, downright illegal activity, and let’s be honest; it’s not as if one would list this award on one’s CV.

The award seems to be reserved for the most repugnant of a repugnant lot.

Dr. John Cunningham, a long time member of hate group, Stop the Australian Vaccination Network, was, quite ironically, awarded the 2017 Thornett Award for the Promotion of Reason.

Trust Me I’m a Doctor and Voice of Reason – Dr. John Cunningham

Previous winners of the Thornett Award include none other than Victorian Health Minister Jill Hennessy (2016), Catherine and Greg Hughes (Light for Riley) (2015), and Toni and David McCaffery (2009).

Readers may recall that, earlier this year, the Murdoch media reported that Cunningham had attempted to coerce Village Cinemas in Melbourne into breaching its contract with the AVN, using financial inducements, after cinema management had refused to buckle under the weight of heavy mobbing and bullying from Cunningham and other fanatical sceptics.  Nice promotion of reason doc.

Trust Me I’m a Doctor and a Voice of Reason and I Have Loads of Cash So Do As You’re Told – Dr. John Cunningham

The AVN had made the booking with Village Cinemas as part of the hugely successful Vaxxed tour of the eastern seaboard of Australia, which included a screening and Q and A session at The Australian National University (ANU), no less.

Polly Tommey outside a lecture theatre at Australian National University

Cunningham has a longstanding obsession with freedom of choice/vaccine safety advocates.  In addition to relentlessly bullying and attacking AVN founder Meryl Dorey and Dr. Judy Wilyman for years, he has also targeted current AVN President (and widowed mother of eight), Tasha David.

Cunningham’s defamatory claims are made worse by the fact that Tasha’s husband died suddenly in late 2010, and Tasha and their children were the ones who found him. Cunningham knew this before making his callous and false statements but he chose to disregard the emotional impact that these hurtful mistruths would have on Tasha and her family just so he could try and undermine Tasha’s family’s vaccine injury experiences.

In our opinion, Cunningham is not a fit and proper person to be a member of a profession which the general public holds in such high regard, yet the government have rewarded his tactics with an Order of Australia Medal for promoting immunisation.

Alas, an Australian Skeptics event wouldn’t be complete without some serious hating on, and mockery of vaccine safety activists.  In fine sceptic tradition, Catherine Hughes of Light for Riley fame gave a presentation denigrating “anti-vaxers” and “conspiracy theorists” on Day 2 of Skepticon.  Her presentation was called “The harsh reality of the anti-vaccination movement”, in which she even employed the cliché, tinfoil hat meme so loved by the sceptics.

Such love from a person purporting to be merely promoting awareness of so-called vaccine-preventable disease.

Light for Riley followers could be forgiven for believing that Catherine Hughes is only a newcomer to the dirty business of vaccine activism.  After all, she’s only been at this since March 2015, right?

She’s actually a veteran anti-choice groupie.  On 27 March 2015, she made the following post to Stop the Australian Vaccination Network (SAVN) Facebook page, admitting to her longstanding commitment to the silencing of vaccination sceptics (the real sceptics).