Lisa Shaw, a 44-year-old BBC Radio voice, died in the hospital after suffering blood clots after receiving the AstraZeneca shot.

Lisa Stonehouse, a 52-year-old Canadian woman, developed blood clots in brain and was dead 12 days after the AstraZeneca shot.

You probably did not see these stories in your local news, or if you did, they probably conveniently failed to mention they received a COVID-19 injection prior to their death, so we bring their stories to the public in our continuing coverage of death and destruction following the COVID-19 bioweapon injections. Mr. Joel Kallman started his career at Oracle in 1996. He was the Senior Director and Vice President of Software Development for the company’s Server Technologies Division.  He led the team that created Oracle APEX, an app development platform that streamlines processes by eliminating complex coding and utilizing simple computing architecture. The Centers For Disease Control (CDC) teamed up with Oracle APEX, under Mr. Kallman’s leadership, to create the v-safe After Vaccine Health Checker. V-Safe is a “smartphone-based tool that uses text messaging and web surveys to provide personalized health check-ins after you receive a COVID-19 vaccine.” The CDC says in its literature that it calls people who report serious side effects via v-safe and fills out VAERS reports for said people.

All v-safe data are administered and stored on Oracle servers. Becker’s Health IT reported security risks with v-safe back in December. It’s unclear how many Americans are enrolled in the v-safe program. But the CDC reported that 1.6 million people enrolled as of January 13, 2021. A May 4 press release indicated that the system has over 100 million records.

Mr. Kallman received his first injection of experimental mRNA on March 26, according to his Twitter page. It’s unclear whether it was Pfizer or Moderna. He praised his team for creating v-safe in the tweet. Mr. Kallman averaged 44 tweets per month since June 2020, with a low of 13 in August and a high of 64 in October, according to Social Blade. He averaged 50 likes per month in that same time period. He had -1 tweet and -4 likes in April 2021. Thus his disappearance is unusual as it relates to his normal social media activity levels.

That means the second injection would have come between April 17 and April 24. So-called “full immunity” would then be on May 24 at the latest.

Mr. Kallman passed away on May 25. He is survived by his wife of 27 years and their 16-year-old son.

Oracle APEX tweeted on May 27 that Mr. Kallman “passed away from COVID-19.” That excuse presents several problems for the entire COVID-19 agenda.

First, they are once again admitting the obvious – that these experimental mRNA shots neither prevent COVID-19, nor mitigate its symptoms.

Second, why are they just now “announcing” his COVID-19 diagnosis? Throughout 2020 and 2021, announcing positive and negative COVID-19 cases for both prominent and semi-prominent people is modus operandi, almost as important as announcing weddings and child birth.

What’s happening here is the new modus operandi since issuance of all the emergency use authorizations for experimental mRNA and DNA viral vector injections.

If someone got shot five times in the back and had a piano dropped on their head, but tested positive for COVID-19 two months earlier, they died from COVID-19 in 2020.

Now if someone receives one of these lethal injections two months prior, the cause of death is anything except Pfizer, Moderna, AstraZeneca, Johnson & Johnson, et al.

That is where we’re at. ATLANTA — A 52-year-old new anchor is still recovering from a condition that mainstream media and her fans are dismissing as pure coincidence.

Ms. Jovita Moore is the evening news anchor for WSB-TV Channel 2 News in Atlanta. She’s worked at the station since 1998 and has held the evening anchor position since 2012.

Ms. Moore received the second dose of experimental Pfizer mRNA on April 2, according to her Facebook page. Her Facebook post that day is full of sad, dramatic irony.

She said that she wants to lead by example and help those who are undecided make their decisions about the shots. Ms. Moore also said she will be outside again in 10 days when she’s “fully vaxxed.”

She also said she is excited about hanging out with fellow “vaxxed” friends, but will still wear masks out on public. Left is the second shot from April 2. Right is the first shot in March.

Things quickly spiraled downward from there. Ms. Moore told her Channel 2 co-anchor Justin Farmer that she was suffering from headaches on Monday, April 12.

She told the news station that she was suddenly “forgetful, disoriented and just not feeling like myself.” She reported almost losing consciousness and passing out at a grocery store later that evening.

Doctors performed an MRI on Tuesday, April 13 and found two tumors in her brain. She described them as “masses.” 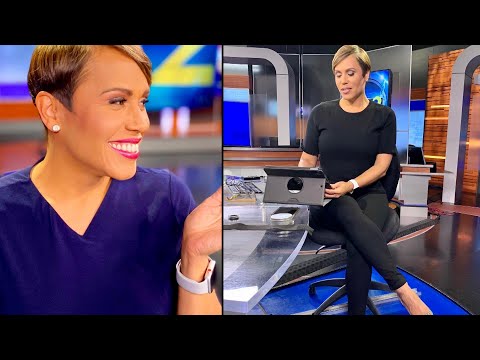 She underwent brain surgery on Friday, April 15. Ms. Moore was discharged from the hospital on or around April 30. Doctors gave her a recovery time of eight to ten weeks after surgery. If that’s the case, she should return to work at the beginning of July.

Ms. Moore posted a family photo to Instagram on Mother’s Day, Sunday, May 9 and thanked everyone for their well wishes. All of her social media accounts have been silent since that time. There have been no further updates from Channel 2 either.

None of the mainstream media outlets that have covered this story mention the experimental mRNA shots at all.

The award-winning presenter developed “severe” headaches a week after having the jab and fell seriously ill a few days later, relatives said in a statement.

The 44-year-old died at the Royal Victoria Infirmary, Newcastle, on Friday afternoon having been treated in intensive care for blood clots and bleeding.

Tributes poured in for the “brilliant” presenter after her death was announced at the weekend.

People under 40 in the UK are being offered an alternative to the AstraZeneca vaccine following reports of extremely rare blood clots on the brain coupled with low blood platelet count.

In a statement released by the BBC, the mother-of-one’s family said:

“Lisa developed severe headaches a week after receiving her AstraZeneca vaccine and fell seriously ill a few days later. She was treated by the Royal Victoria Infirmary’s intensive care team for blood clots and bleeding in her head.

“Tragically, she passed away, surrounded by her family, on Friday afternoon. We are devastated and there is a Lisa-shaped hole in our lives that can never be filled. EDMONTON, ALBERTA — A 52-year-old widow and mother is dead as her daughter wonders if medical personnel did all they could to save her life.

Mrs. Lisa Stonehouse received the first dose of experimental AstraZeneca viral vector on April 21, according to the Saltwire Network. She reported “normal” side effects immediately thereafter, but took no definitive action.

But the symptoms turned to heart palpitations, severe headaches, nausea, general fatigue and chills a week later. She called Health Link (811) for advice.

They told her that the symptoms were normal and to contact a doctor if anything worsens. That’s exactly what happened.

Lisa’s daughter, Jordan Stonehouse, took her to Grey Nuns Hospital on April 29. Jordan told Global News that her mother was discharged within 10 minutes after arrival. Doctors told her to take Tylenol and go home.

Blood had spilled out all over her brain as well, giving her a grim prognosis. A ruptured aneurysm or stroke likely caused the bleeding. Doctors transported Mrs. Stonehouse to University of Alberta Hospital, but she suffered a seizure on the way there.

Mrs. Stonehouse was taken off life support on Saturday, May 1.

The Global News report about Mrs. Stonehouse is mostly an advertisement for AstraZeneca and other experimental shots. But Jordan said that she’s always going to wonder if her mother would still be alive had Grey Nuns Hospital admitted and treated her. At that point, Lisa was still relatively functional and not exhibiting symptoms of brain bleed.

Covenant Health, which owns Grey Nuns, told CTV that it is “actively investigating” all circumstances surrounding Mrs. Stonehouse’s emergency room visit. Dr. Bruce Ritchie of the University of Alberta said that all Alberta hospitals are stretched thin. He offered this ominous excuse for Grey Nuns Hospital:

Since it’s so common with vaccines and millions of doses going into patients’ arms, we clearly can’t do scans on all patients who have headaches. But, if someone has a headache that’s much more severe they should consult their physician right away.

Shandro said he realizes people are shocked, but that he still “expects” everyone to “do the right thing” and receive experimental injections themselves. Meanwhile Jordan, 19, is studying to be a nurse.

She lost her father in 2019 and now is grieving the loss of her other parent. Jordan said “vaccines” are important in the overall fight against COVID-19 and that she will get her shots in due course.

But she also said she does not want this to happen to any other family. KELOWNA, BRITISH COLUMBIA — A 50-year-old wife and mother is dead after trying to stay positive for the remainder of her short post-injection life.

Mrs. Lynnae Erick received the first dose of experimental Pfizer mRNA on May 17, according to her Facebook page. She first said the shot was AstraZeneca, but corrected herself in the comments section. Mrs. Erick immediately reported a sore arm and fatigue. Her condition progressively worsened over the next week. While she posted many positive messages (as was obviously her nature and normal self), Mrs. Erick was suffering. She said her neck was sore and she could not stay awake at all. Mrs. Erick posted a very sad update on Saturday, May 22. The foregoing post has since been deleted. Many friends and relatives started expressing concern. One suggested she take colloidal silver. Another told her to call 811, a health advice line in Canada.

But she continued suffering profusely, apparently without relief. Mrs. Erick said Sunday, May 23 was even worse than all previous days. She posted one final update on Sunday, May 23. Mrs. Erick passed away the following Monday morning, May 24. She is survived by her husband and a 12-year-old daughter. TORONTO, ONTARIO — A Toronto-based actress and acting teacher is seemingly content with her new look, and is encouraging others to follow suit.

Ms. Jennifer Gibson received the experimental AstraZeneca viral vector shot on April 24, according to her Instagram page. She expressed gratefulness and apparent sympathy for those who “don’t have the opportunity” to receive experimental injections. Two weeks later, she noticed her face looked different. She developed full-fledged Bell’s Palsy, a known adverse effect for all of the experimental injections, by May 18. She’s chronicling the ordeal on Instagram. Mrs. Gibson posted a photo of an acupuncture session on May 23. Mainstream media and compromised doctors are deflected blame away from the AstraZeneca shot. But Mrs. Gibson admitted on Thursday that her condition is the result of a “bad reaction to the AstraZeneca vaccine.” Most cases of Bell’s Palsy heal by themselves within six months. The condition is permanent in some cases.

Mrs. Gibson has appeared in the soap operas “The Bold and the Beautiful” and “Guiding Light.” But she apparently makes most of her living as an acting teacher and coach.

Despite the possibility of permanent disfigurement, Mrs. Gibson said she “does not want to discourage people from getting vaccines.” She said that “people don’t die from Bell’s Palsy,” thus “it’s sucks, but is dealable.” Mrs. Gibson said she got the shot because she “wanted to get back to real life.”