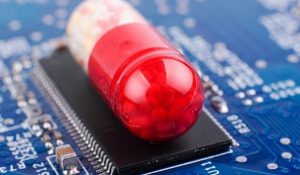 The U.S. Food and Drug Administration today approved the first drug in the U.S. with a digital ingestion tracking system. Abilify MyCite (aripiprazole tablets with sensor) has an ingestible sensor embedded in the pill that records that the medication was taken. The product is approved for the treatment of schizophrenia, acute treatment of manic and mixed episodes associated with bipolar I disorder and for use as an add-on treatment for depression in adults.

The system works by sending a message from the pill’s sensor to a wearable patch. The patch transmits the information to a mobile application so that patients can track the ingestion of the medication on their smart phone. Patients can also permit their caregivers and physician to access the information through a web-based portal.

“Being able to track ingestion of medications prescribed for mental illness may be useful for some patients,” said Mitchell Mathis, M.D., director of the Division of Psychiatry Products in the FDA’s Center for Drug Evaluation and Research. “The FDA supports the development and use of new technology in prescription drugs and is committed to working with companies to understand how technology might benefit patients and prescribers.”

It is important to note that Abilify MyCite’s prescribing information (labeling) notes that the ability of the product to improve patient compliance with their treatment regimen has not been shown. Abilify MyCite should not be used to track drug ingestion in “real-time” or during an emergency because detection may be delayed or may not occur.

Schizophrenia is a chronic, severe and disabling brain disorder. About 1 percent of Americans have this illness. Typically, symptoms are first seen in adults younger than 30 years of age. Symptoms of those with schizophrenia include hearing voices, believing other people are reading their minds or controlling their thoughts, and being suspicious or withdrawn. Bipolar disorder, also known as manic-depressive illness, is another brain disorder that causes unusual shifts in mood, energy, activity levels and the ability to carry out day-to-day tasks. The symptoms of bipolar disorder include alternating periods of depression and high or irritable mood, increased activity and restlessness, racing thoughts, talking fast, impulsive behavior and a decreased need for sleep.

Abilify MyCite contains a Boxed Warning alerting health care professionals that elderly patients with dementia-related psychosis treated with antipsychotic drugs are at an increased risk of death. Abilify MyCite is not approved to treat patients with dementia-related psychosis. The Boxed Warning also warns about an increased risk of suicidal thinking and behavior in children, adolescents and young adults taking antidepressants. The safety and effectiveness of Abilify MyCite have not been established in pediatric patients. Patients should be monitored for worsening and emergence of suicidal thoughts and behaviors. Abilify MyCite must be dispensed with a patient Medication Guide that describes important information about the drug’s uses and risks.

In the clinical trials for Abilify, the most common side effects reported by adults taking Abilify were nausea, vomiting, constipation, headache, dizziness, uncontrollable limb and body movements (akathisia), anxiety, insomnia, and restlessness. Skin irritation at the site of the MyCite patch placement may occur in some patients.

Prior to initial patient use of the product, the patient’s health care professional should facilitate use of the drug, patch and app to ensure the patient is capable and willing to use the system.

The FDA granted the approval of Abilify MyCite to Otsuka Pharmaceutical Co., Ltd. The sensor technology and patch are made by Proteus Digital Health.

The FDA, an agency within the U.S. Department of Health and Human Services, protects the public health by assuring the safety, effectiveness, and security of human and veterinary drugs, vaccines and other biological products for human use, and medical devices. The agency also is responsible for the safety and security of our nation’s food supply, cosmetics, dietary supplements, products that give off electronic radiation, and for regulating tobacco products.