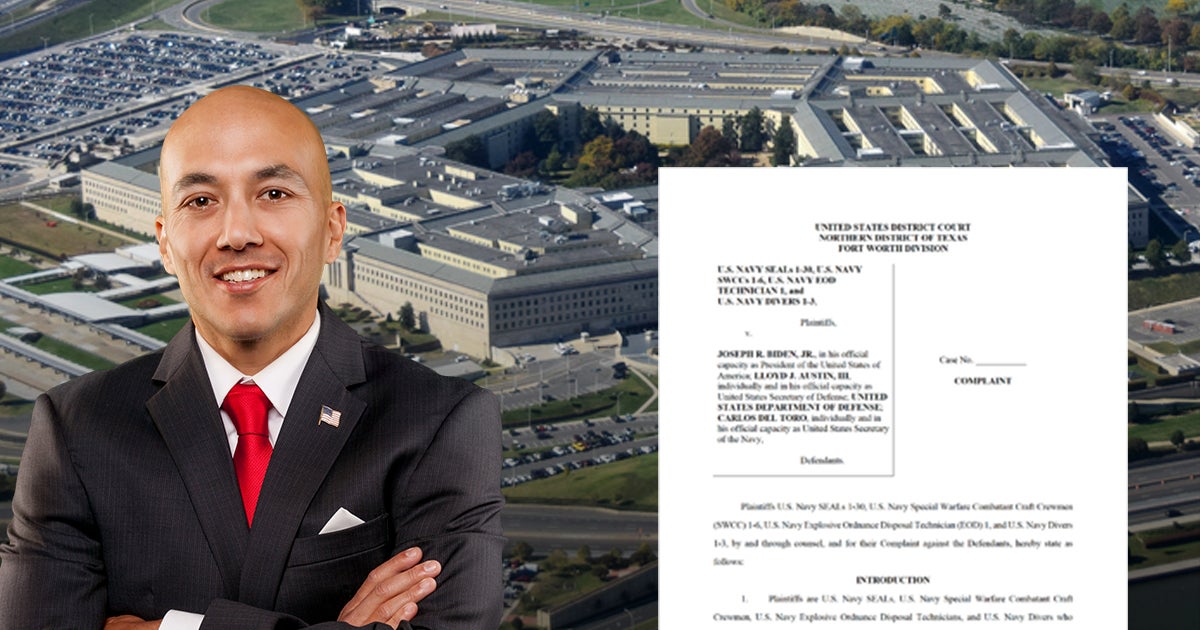 This week, First Liberty filed a federal lawsuit on behalf of a number of U.S. Navy SEALs and other Naval Special Warfare personnel against the Biden Administration and the Department of Defense for their refusal to grant religious exemptions to the COVID-19 vaccine mandate—a policy that’s effectively forcing America’s warriors to choose between their faith and serving their country.

Our U.S. Navy SEAL clients are being threatened with punishment, involuntary separation or even court-martial. Why? Because they are seeking a legal religious accommodation to the vaccine mandate, which is guaranteed under both federal and military law.

But it’s not just our Navy SEALs who face harassment because of the DoD’s policy. Their families are also being targeted.

First Liberty has documentation from the DoD stating that military service members and their dependents (who are not subject to military orders) cannot travel until they are vaccinated. That’s unjustified, outrageous and it should NOT be happening to our military heroes and their families, who make tremendous sacrifices in service to our nation.

Watch the video below. In it, First Liberty General Counsel Mike Berry appears at a recent press conference in Washington, D.C. discussing the harmful impact the DoD’s mandate is having on our service members. Joining him are several members of Congress, including Sens. Roger Marshall (R-KS) and Ted Cruz (R-TX).

Collectively, our clients have more than 350 years of military service and more than 100 combat deployments. But under the Pentagon’s mandate, their careers—years of irreplaceable experience, leadership and arduous training—could be on the verge of destruction for choosing to serve in accordance with their faith.

It defies logic that the Commander in Chief and military leaders would be so willing to purge our armed forces of its best warriors. Instead of helping them focus on their mission and duty to protect our country, threatening to expel Navy SEALs is harmful to our national security. This punitive approach only makes us less safe.

Even more shocking, the government could also force these elite fighters to repay the nation for their training—all for simply asking for a religious accommodation. That’s millions of taxpayer dollars in training—approximately $2 million per Navy SEAL—to prepare the most elite fighting force on the face of the Earth.

There’s a misconception that Americans forfeit their First Amendment right to religious liberty when they join the military. That’s simply not the law. Although there’s less individual autonomy for service members compared to civilians, members of the armed forces are not stripped of the same constitutional freedoms they are risking life and limb to defend.

Under federal law and DoD regulations, service members can seek a religious accommodation from any requirement—including vaccines—that burdens their sincerely held religious beliefs. Not only is it illegal that the DoD is threatening to boot them from the Navy or even send them to jail, but it’s downright vindictive and punitive.

Bottom line, our military heroes deserve far better. They sacrifice too much for our liberties to be treated this way, or to face harassment and intimidation because of their religious convictions. They are every bit the brave, patriotic Americans as those who are vaccinated.

First Liberty is gearing up to enter what could be an intense legal battle against the DoD. Our Navy SEALs need your support now more than ever to help them win the fight.

They fought for us. It is time for us to fight for them. We need to let our heroes know that we have their back.

We’re urging you to send a message of encouragement to our Navy SEAL clients. With a note expressing your support, you can let them know that they’re not alone and that you’re grateful for their immeasurable sacrifice.

Additionally, please consider making a timely donation to First Liberty today. Thanks to your generous support, our legal team continues to be the greatest hope for victory for military service members, for the heroes and their families who sacrifice so much to protect our freedoms.

Your gift will help First Liberty deliver a victory for the dozens of Navy SEALs who face the threat of career-ending punishment.