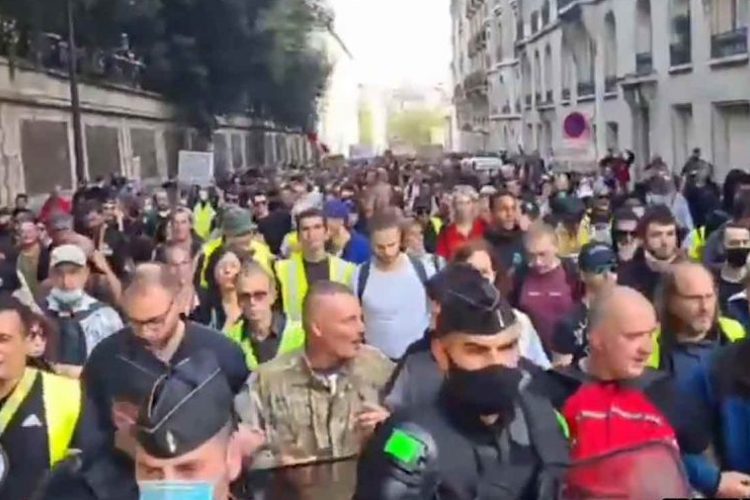 “The health pass will never be a right of access that discriminates among the French. It cannot be made compulsory for access to everyday places,” French President Emmanuel Macron pledged in April during an interview with the regional press. However, less than three months later and Macron has done an about-face.

Last week, in full totalitarian form, Macron mandated the “health pass” or (pass sanitaire) that will be mandatory in order to gain access to leisure and cultural venues with more than 50 people, including cinemas and museums. From the beginning of August, it will be necessary to show your health pass to have coffee or eat lunch at a restaurant – even on an outdoor terrace – or to shop at a mall.

In order to have a coffee in France, beginning next month, citizens will have to prove they’ve had the vaccine. According to the government’s draft bill, restaurants and businesses who refuse to comply will be fined up to €45,000 and proprietors face up to a year in prison.

This new push is the most restrictive COVID tyranny in all of Europe and certainly in the West. Naturally, it has inspired much-deserved outrage.

Beginning with Macron’s announcement last week, thousands began protesting in Paris. They have marched on government buildings and even taken to vandalizing vaccine centers. More than 100,000 protesters took to the streets across the country over the weekend with some donning the famous “gilets jaunes” or “yellow vests.”

The French know what to do.  #GiletsJaunes are warming up, expect it to get fiery over the coming weeks, protests are planned.  pic.twitter.com/rpRAdHvLGl

On Friday night, vandals used fire hoses to flood a clinic in Lans-en-Vercors, BBC News reports, and on Saturday, a site in Urrugne was partially destroyed in an arson attack. Some protesters also attempted to gain access to government buildings as well.

While the media is painting the protesters as “anti-vaxxers,” in reality, the people on the ground simply desire freedom. There is nothing free about forced vaccines to have coffee or to engage with the public.

“Everyone is sovereign in his own body. In no way does a president of the Republic have the right to decide on my individual health,” said one protester in Paris who identified herself as Chrystelle, according to a report in Reuters.

As NPR reports, Lucien, a 28-year-old retail shop manager, said he wasn’t anti-vaccine, but thought that everyone should be able to do as they please with their own body. “The government is going too far,” he said. His 26-year-old friend Elise said, “I am vaccinated against diphtheria, tetanus, and polio. But the COVID vaccine is just too experimental.”

While some of the earlier protests consisted of citizens clashing with police, over the weekend, the sentiment seemed to change and police decided to be on the right side of history.

Conveniently absent from any mainstream media network is the video below which shows French police joining in with the protesters instead of tear gassing them. This is how the French will win out. When the government enforcers refuse to kidnap and cage folks who decline to take an experimental vaccine to live their lives, the government has no legs to stand on.

As TFTP reported in 2018, the French Yellow Vest movement was successful in forcing the government to reverse course on new taxes. After yellow vests took to the streets of France for weeks, French Prime Minister Edouard Philippe was forced to announce the suspension of the fuel tax hike which triggered massive unrest across the country.

Hopefully, this new unrest will have the same effect and governments across the world who are mulling over the idea of forced vaccinations think twice before making such a tyrannical decision.

Matt Agorist is an honorably discharged veteran of the USMC and former intelligence operator directly tasked by the NSA. This prior experience gives him unique insight into the world of government corruption and the American police state. Agorist has been an independent journalist for over a decade and has been featured on mainstream networks around the world. Agorist is also the Editor at Large at the Free Thought Project.