After substantial difficulty and expense, Geoengineering Watch has utilized two types of aircraft to complete multiple atmospheric particulate sampling flights up to and exceeding 40,000 feet. One of the aircraft we conducted our testing missions in is also used by the National Oceanic and Atmospheric Administration (NOAA) for their atmospheric testing operations. The Geoengineering Watch team carried out multiple sample gathering flights in the high altitude haze layer being emitted by large jet carriers.

The lingering, spreading and sun blocking jet aircraft trails are not just condensation as we have been told by government sources. The dimming of direct sunlight by aircraft dispersed particles, a form of global warming mitigation known as “Solar Radiation Management”, is ongoing. These global climate engineering operations are causing unquantifiable damage to the planet’s life support systems and human health.

The twelve minute video below is an insight segment from the under production ground breaking climate engineering exposé documentary titled “The Dimming”.

All are needed in the critical battle to wake populations to what is coming, we must make every day count. Share credible data from a credible source, make your voice heard.
DW

To keep up with the progress of the coming GeoengineeringWatch.org documentary film, please like and follow us on our new Facebook page THE DIMMING https://www.facebook.com/TheDimming/ Be sure to click the follow / following box (right by the “like” button), then click the “See First” option, as Geoengineeering Watch is being heavily censored on social media. Clicking the “See First” option is the only way to ensure you will see our post updates in your newsfeed. 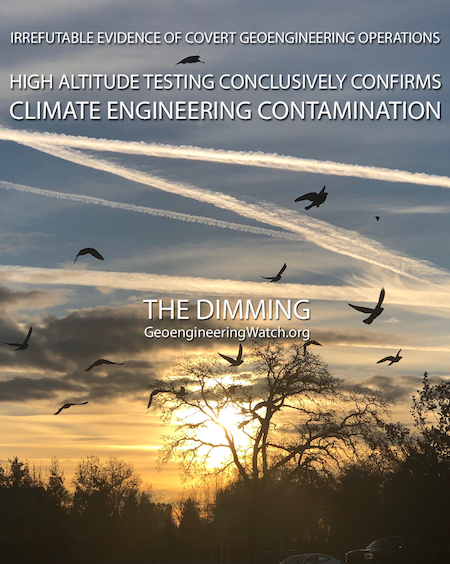 Rebeccs: You have done a lot of research. TY for posting....
Susu Lespier: I read the whole 10 pages, I thank you for being c...
James McAndrew: Here in California, the indoor masking mandates ar...
Thomas Pickering: https://strangerinajewishworld.blogspot.com/2021/0...
Linda: Yes, I agree with previous comments. is this onli...
Ryan Pelech: You are the deluded one. Want to talk about wast...
Jane M Dopp: I am located in Minneapolis MN and have others int...
Jane M Dopp: I have been trying to get information on the World...
Ralph Fucetola: That URL should point here: https://drrimatruthre...
Bruce Porter: Got a 502 bad gateway on GeneralBertSpeaks.com...