Freedom needs your help. If you’re able, give what you can.

ONTARIO, CANADA – GoFundMe has been holding funds raised from the Freedom Convoy truckers for days, saying they were checking to “ensure it complies with our terms of service” as well as “applicable laws and regulations.”

As of Friday afternoon, they announced in a statement that they’ve taken down the fundraiser, which has amassed over $10 million. Approximately $1 million was released last week, meaning the company is withholding $9 million contributed by supporters.

“Following a review of relevant facts and multiple discussions with local law enforcement and city officials,” the statement read, “this fundraiser is now in violation of our Terms of Service (Term 8, which prohibits the promotion of violence and harassment) and has been removed from the platform.”

The company continued, saying they “now have evidence from law enforcement that the previously peaceful demonstration has become an occupation, with police reports of violence and other unlawful activity.”

The statement said that the first $1 million released had a “clear distribution plan,” and that organizers “confirmed funds would be used only for participants who traveled to Ottawa to participate in a peaceful protest.”

“Given how this situation has evolved,” the statement said, “no further funds will be directly distributed to the Freedom Convoy organizers — we will work with organizers to send all remaining funds to credible and established charities verified by GoFundMe.”It’s unclear why the company wouldn’t automatically refund the money people intended to go to a specific place. When Red Voice Media contacted GoFundMe for further explanation, we noticed that one of the first subjects you can click to get help with is: “Can’t donate to Freedom Convoy 2022.” We have not heard back from the company at the time of this writing. Those who donated and don’t want their money going wherever GoFundMe sees fit can request their money back by February 19 by using THIS FORM.However, there is another option mentioned by the group Covid Red Pills: Donors can file a chargeback with their credit card, since funds were supposed to go to a specific fundraiser but GoFundMe has failed to send money where it should go. That could fall under suspected fraud theoretically.When that’s done, the merchant could see a $15-$100 chargeback fee. Additionally, according to Nav.com, if a business gets enough chargebacks, “they can affect [the business’s] merchant account. This can lead to higher processing fees and/or the loss of merchant accounts.” 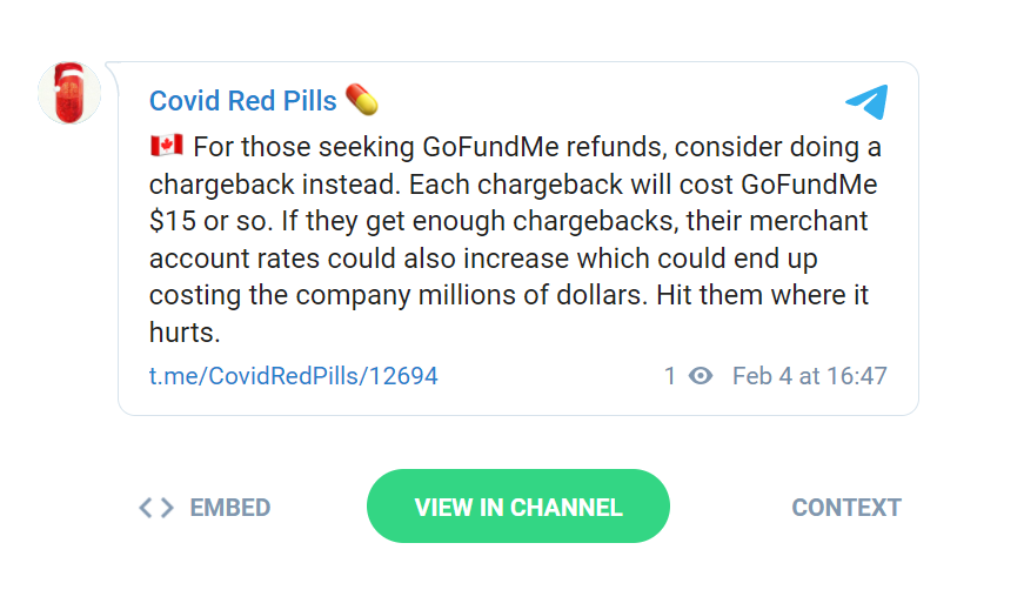 Give Send Go has agreed to take on the fundraiser. However, their site appears to be overwhelmed at the time and appears unable to accept donations just yet. Keep checking back by clicking HERE.