Newly elected California governor Gavin Newsom has had to declare state of emergency due to the latest unprecedented firestorms. Will Newsom disclose the climate engineering factor that is fueling the firestorms? For the record, Governor Gavin Newsom was fully briefed on climate engineering facts nearly 5 years ago, and has done nothing (explanation further down in this article).

California is yet again ablaze, even in November. “Official sources” have tried to convince the masses that the record raging wildfires are because we are not cutting down enough trees, but is this the truth? The short answer is a resounding no. In fact, such a narrative flies in the face of countless verifiable facts. All available data makes clear that the single greatest causal factor relating to the epic wildfires all over the globe are illegal and ongoing geoengineering operations.

The “Camp Fire” has exploded with blinding speed and has already become the most destructive wildfire in California history. How bad do conditions have to become before populations are willing to wake up to the global climate engineering insanity?

Below is film footage from the Woolsey Fire which is also raging in California.

Will governor Gavin Newsom (after gloating over his victory) ever acknowledge the climate engineering assault that is wreaking havoc on the drought stricken and scorched state of California? Don’t count on it. Has Governor Newsom ever been fully informed of the climate engineering issue? As already stated, the answer is yes, and I can say this with absolute firsthand knowledge.

On February 7th, 2014, I attended a private meeting at the State Capitol with then Lieutenant Governor Gavin Newsom (and his top aid) to present irrefutable data on the critical climate engineering issue (the meeting consisted of only the three of us in Gavin’s office). The meeting was facilitated through mutual contact between Gavin Newsom and myself. Gavin and his staff member did not dispute any of the data presented in the meeting. At one point during the meeting / data presentation, Gavin sat back in his leather chair, took a very deep breath, and stated “I didn’t need this” (an absolute acknowledgment of the geoengineering operations). Unfortunately, then Lieutenant Governor Newsom (now governor Newsom) quickly turned his back on the geoengineering issue. Were Gavin’s career aspirations the superseding priority? Is there really any question about this?

Below is a short communication exchange between myself and Gavin that took place in January of 2016 ( a full 2 years after the climate engineering briefing in Gavin’s office). The communication reveals exactly what one would expect from an individual whose political aspirations are the bottom line.

Hello, Gavin, what will the public feel when they finally wake to the ongoing climate engineering nightmare and they find out that you have been aware of it all along? Since I personally presented the science on this critical issue to you and your top aid in your office some 2 years ago (February 7th 2014), you have disclosed nothing about the ongoing geoengineering atrocities in our skies. The population is waking up, and I can only imagine that they will not be pleased with all those that have helped to hide the climate engineering crimes and instead were focused on mailing out letters like the one your group sent on the message below.

Governor Newsom’s response to my message is below:

Won’t apologize for focusing on gun

point of view and respectfully took

the time to meet with you and researched

your concerns , while we

may not share the same conclusion , I wish you the best and will

happily remove your email address from

our database as to no longer burden

you with issues that clearly are not

Sent from my iPhone

My reply to Governor Newsom:

With all due respect, Gavin, mathematically speaking, the amount of human mortality already caused by the highly toxic aerosol heavy metals being sprayed is so vast it could never be quantified. This is not even to mention the endless list of wider threats that are all connected to the ongoing geoengineering insanity. Though I am, of course, all for ending gun violence, the amount of human mortality being caused by this subject (gun violence) is dwarfed beyond belief by the massive climate engineering assault on the planet and the human race. Our legal team will soon file suit on this critical issue which so many state agencies are doing their best to hide from public view. The public has a right to know what is going on above their heads and we have the data to prove it.

What are the agendas of the weather makers? What were the composition and conclusions of the information passed on to Governor Newsom in the 2014 meeting at the State Capitol? Below is an outline, but with current data.

Though we cannot know all the objectives of the geoengineers, available data makes clear that heating and drying some regions in order to engineer large scale temporary cool-downs in other regions is a core part of the equation. The NOAA “departure from normal high temperature” map below reveals nothing less than the scheduled weather for the US for the period from November 12th through the 16th, 2018. 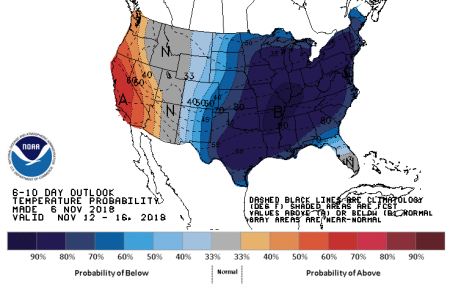 Private defense contractor and geoengineering climate modification patent holder Raytheon does all the weather modeling for the National Weather Service (NWS) and the National Oceanic and Atmospheric Administration (NOAA). This amounts to dictating the “forecasts” (scheduled weather) to the nation’s weather “forecasting” personnel.

How are the engineered Eastern US cool-downs achieved? The “ridiculously resilient ridge” (RRR) heat dome of ionosphere heater created high pressure (over the US West) effectively blocks any inflow of storms and moisture into the western US. Any and all moisture flowing east from the Pacific is pushed around the clockwise rotating RRR. The NOAA “departure from normal precipitation” map below reflects the US “scheduled” weather for November. Notice the extremely anomalous below normal rain bullseye over Northern California, this dry zone is a direct result of the factors just described. 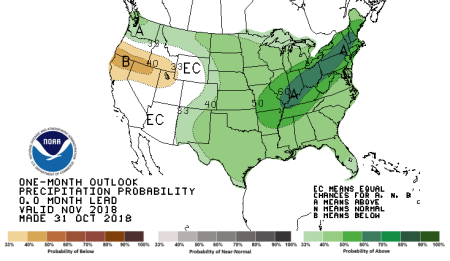 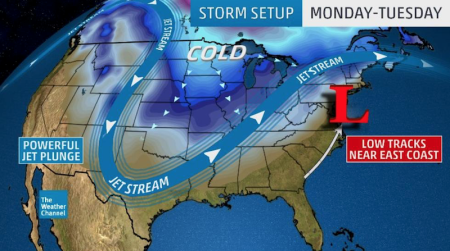 Patented processes of chemical ice nucleation for weather modification are utilized to create a layer of cold dense air that eventually sinks to the surface and thus facilitates the desired engineered cool-down event further east in the US. The patented chemical ice nucleation process is at the core of the rapidly increasing ice storm and engineered weather whiplash scenarios. 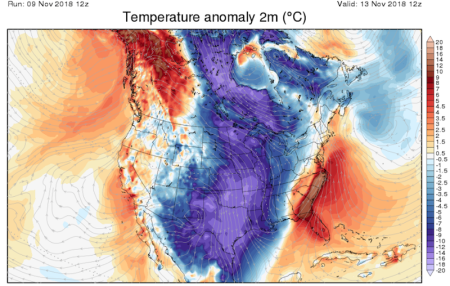 The chemical ice nucleation process can and often does turn what should be a liquid precipitation event into a frozen precipitation event. This amounts to engineering winter in some regions at the expense of drying and heating other regions. GeoengineeringWatch.org has consistently covered the “engineered winter” geoengineering scenarios , a part of this scenario involves incinerating the US West under the high artificially created high pressure heat dome.

Again, are Governor Gavin Newsom’s political and power aspirations his top priority in this equation? Why would we think otherwise? Our so called government (including federal) is bought and paid for from the top down. If we are to have any chance whatsoever of exposing and halting the climate engineering programs of global omnicide, it will be from grass roots level campaigns of raising and reaching a critical mass of awareness. Sharing credible data from a credible source, is key. Make your voice heard, we must make every day count.
DW

For many years GeoengineeringWatch.org has been trying to sound the alarm about the climate engineering assault on California (and the world). Below is the presentation “Engineered Drought Catastrophe, Target California”.