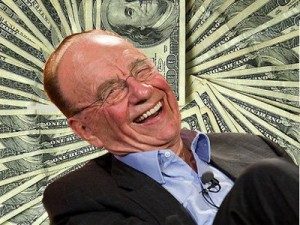 I believe your media group’s No Jab, No Play campaign has influenced taxpayer-funded vaccination policy in Australia, with then Prime Minister Tony Abbott obligingly adopting your campaign as policy, i.e. No Jab, No Pay, with cross-party support from Labor’s Bill Shorten and the Greens’ Richard Di Natale.  Your National Political Editor, Samantha Maiden, gloated about the success of The Sunday Telegraph’s No Jab, No Play campaign (11 April 2015).
The No Jab, No Pay law was enacted in January 2016, under Prime Minister Malcolm Turnbull, the intent of this law being to make parents compliant to the ever-increasing taxpayer-funded children’s vaccination schedule.  Some state governments are now also adopting No Jab, No Play policies.  It appears Australian politicians may have been influenced by the Murdoch media group, while ignoring citizens well-founded concerns about the burgeoning National Immunisation Program Schedule.
I strongly believe the Murdoch family has a conflict of interest in this matter, i.e. the Murdoch family’s association with the Murdoch Children’s Research Institute, which is involved in industry-funded vaccine research and development.  The Murdoch Children’s Research Institute website notes that Rupert Murdoch’s mother Dame Elisabeth Murdoch was involved in the founding of this institute. The Murdoch Children’s Research Institute’s Corporate Partners webpage states that News Corp and Foxtel support this institute.

I suggest the Murdoch family’s association with an institute involved in industry-funded vaccine research and development should be clearly disclosed as a conflict of interest on all articles regarding vaccination published by the Murdoch media group.

For years your media group has run the extraordinarily biased No Jab, No Play vaccination campaign, and has been a major party in creating a polarised ‘pro’ and ‘anti’ vaccination climate, with hyperbolic articles such as ‘Anti-vaxers, you are baby killers’ (Claire Harvey, The Sunday Telegraph, 21 March 2015).

In this hostile climate, any citizen questioning vaccination policy is reflexively labelled an ‘anti-vaxxer’ and marginalised or even censored.  Politicians are refusing to respond to citizens’ concerns about taxpayer-funded vaccine products, the cost of which is kept secret from taxpayers, i.e. categorised as ‘commercial-in-confidence’, protecting vaccine manufacturers from scrutiny.

Your newspapers have failed to provide serious, objective and nuanced critical analysis of taxpayer-funded vaccination policy, i.e. examination of the burgeoning National Immunisation Program Schedule, which currently sits at around 50 doses of vaccines for children, via single and combination shots, and revaccinations.[2]  This does not include the annual flu vaccinations we are all being pressured to have, young and old. We have no idea of the long-term consequences of this increasing vaccine load.

I suggest children are being grossly over-vaccinated with this plethora of vaccine products, which are added to the schedule without any consultation with the community. The community is being coerced with inducements and made compliant to the ever-increasing schedule, with the right to ‘informed consent’ before each vaccine intervention being effectively denied, in contravention of The Australian Immunisation Handbook’s definition of valid consent, i.e that “It must be given voluntarily in the absence of undue pressure, coercion or manipulation”.  I suggest doctors, nurses and midwives are conflicted in their ethical duty with this coercive medical intervention.

Since the No Jab, No Pay law was enacted in January 2016, yet another injection of diphtheria, tetanus and acellular pertussis vaccines (GlaxoSmithKline Infanrix or Sanofi-Aventis Tripacel) has been added to the schedule, along with the recent addition of the meningococcal ACWY vaccines (Pfizer Nimenrix).  Intensive industry lobbying for GlaxoSmithKline’s Bexsero meningococcal B vaccine continues, along with increasing pressure for annual flu vaccines for children, e.g. the NSW Government offering ‘free’ flu vaccines for children under five years.

The bloated and conflicted vaccination schedule is out of control, we have no idea of the long-term cumulative consequences of all these vaccine interventions.

The taxpayer-funded National Immunisation Program Schedule must be subject to an urgent review, particularly in light of the conflicts of interest that permeate this bloated schedule, and emerging problems with vaccines, e.g. repeated revaccination throughout life with the failing aluminium-adjuvanted acelluar pertussis (whooping cough) vaccine, over-use of live vaccines, failing immunity of mumps vaccines, flu vaccines etc.

Mr Rupert Murdoch and Mr Lachlan Murdoch, would you not agree your failure to “tell all sides of the story” in regards to the bloated and conflicted vaccination schedule contravenes News Corp’s own Editorial Code of Conduct?

I presented on the subject of conflicts of interest in vaccination policy at the citizens’ conference The Censorship of the Vaccination Debate in Australia Today, held in Sydney on 30 June 2018.

In my presentation I refer to your media group’s influence on vaccination policy, noting that you have not clearly disclosed your conflict of interest in this matter, i.e. the Murdoch family’s association with the Murdoch Children’s Research Institute, which is involved in industry-funded vaccine research and development, supported by News Corp and Foxtel.

As well as examining the influence of rich and powerful families such as the Murdochs and Bill and Melinda Gates, and the conflicts of interest of the Cochrane ‘evidence based medicine’ group, my presentation also exposes the conflicts of interest of two academics who are very influential on vaccination policy, Terry Nolan and Robert Booy, who are involved with vaccine industry-funded research.

Terry Nolan is also a member of the World Health Organisation’s SAGE group, and thereby influential on international vaccination policy.