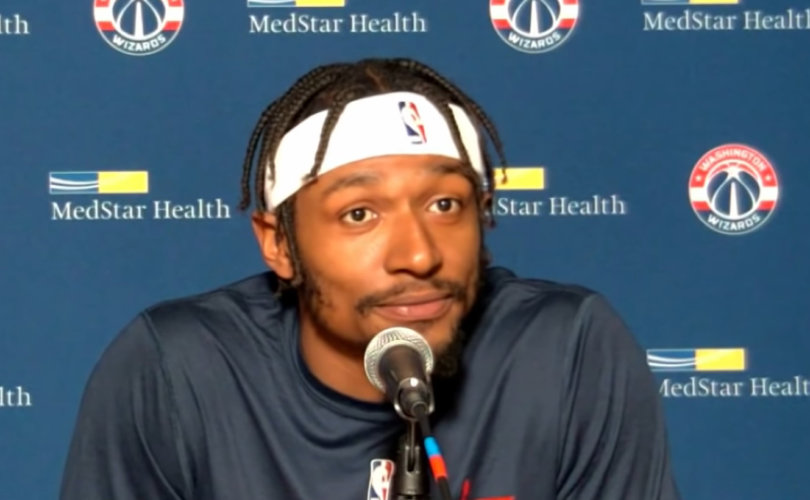 (LifeSiteNews) — Washington Wizards basketball player Bradley Beal said he is not interested in getting the COVID shot.

“Personal reasons,” Beal commented Monday when asked during Wizards Media Day why he chose not to get the shot. “Every player in this world is going to make their own decision for themselves.”

He then pushed back on the efficacy of the COVID jabs with his own questions.

“I would like an explanation to, you know, people with the vaccine, why are they still getting COVID? If that’s something that we are supposed to highly be protected from,” Beal said.

He noted that he has antibodies since he contracted COVID-19 in July, which forced him to miss the Summer Olympics. He said it’s a “possibility” that he could still get COVID, in the same way some jabbed NBA players and coaches have contracted the virus.

The WUSA 9 news team, which provided the video for the media day, tried to blame people who have chosen not to get the COVID shot for the breakthrough infections in people who have received inoculation as part of its segment.

Israeli researchers concluded in an August 2021 study that natural immunity offers better protection against COVID than the jabs.

Beal is not the only NBA player who has shared his thoughts about the COVID shots.

Brooklyn Nets player Kyrie Irving appeared to imply that he has not been jabbed. Irving did not attend the Nets’ in-person press conference on September 27, and Rolling Stone speculated that it is because he would not have the required New York City “vaccine passport” to enter the home arena.

“I would like to keep all that private,” Irving said when asked on Monday about his jab status. “Please just respect my privacy.”

Orlando Magic player Jonathan Isaac took issue with publications, including the Rolling Stone, for how it covered the personal medical decisions of adult NBA players. He said he was “badly misrepresented” by Rolling Stone.

“I have nothing but the utmost respect for every healthcare worker and person across the world who have worked tirelessly … I am grateful I live in a society where vaccines are possible,” Isaac said on September 27, “but with that being said, it is my belief that the vaccine status of every person should be their own choice, without bullying, being pressured, or being forced.”

“I’m not ashamed to say that I am uncomfortable with taking the vaccine at this time,” he added.

There is no jab mandate for NBA players, as part of a deal with the National Basketball Players’ Association. However, players who have not taken the inoculation are not allowed to eat with their teammates and must stay masked and six feet away from everyone in attendance at a team meeting, according to NBC Sports.

“And unvaccinated players also will not be permitted to visit ‘higher-risk settings,’ the NBA said, such as restaurants, bars, clubs, entertainment venues, and large indoor gatherings,” NBC Sports reported.

Coaches, referees and most team employees must prove they have been inoculated. About 90 percent of the players have been vaccinated.

NBA players have reason to be concerned about the COVID shots, since many young men, which all the athletes are, have had problems with heart inflammation.

The Food and Drug Administration’s deputy advisor on vaccines, Doran Fink, convinced the agency in June to add a warning about myocarditis and pericarditis to the Pfizer and Moderna shots.

Fink reiterated his concerns during a September 17 FDA meeting on the safety of the jabs. He said that adults 40 years old and younger are at a greater risk of severe reactions from the jabs than they are from COVID itself.