More research has been published highlighting more problematic side effects linked to COVID-19 shots. Last week, we published our latest update on rare cases of heart inflammation that have been linked to the mRNA COVID jabs, including the jabs from Pfizer-BioNTech and Moderna. After a hurried secret meeting with its advisory board on vaccine safety, the FDA reluctantly release a warning asking patients experiencing these symptoms to seek help immediately. 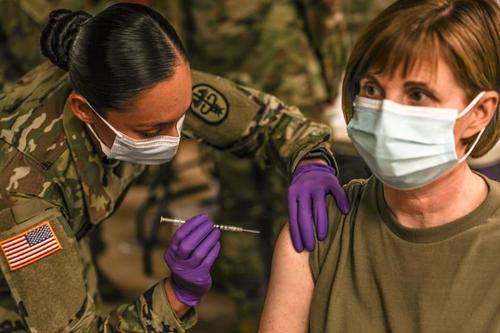 The latest study, published in JAMA’s Cardiology Journal on Tuesday, showed that 23 male soldiers (including 22 who were deemed “previously health”) between the ages of 20 and 51 presented “acute onset of marked chest pain” within four days of receiving their second dose. Patients who sought care for chest pain in the military health-care system following COVID-19 vaccination and were subsequently diagnosed with clinical myocarditis were included in the case study.

All the members who tested for myocarditis (for those who aren’t familiar with it, myocarditis is a condition that causes the swelling of the heart muscle and can cause difficulty breathing, heart failure, and death) were all “physically fit by military standards and lacking any known history of cardiac disease, significant cardiac risk factors, or exposure to cardiotoxic agents.”

The cardiac symptoms faded within a week of onset for 16 patients, while 7 others continued to have chest discomfort at the time of this report; follow-up is ongoing.

As one table from the study showed, the number of cases of heart inflammation reported in the military is much higher than the rate that one might expect given population-wide incidence of these symptoms. This suggests some new variable is likely causing the surge in cases. 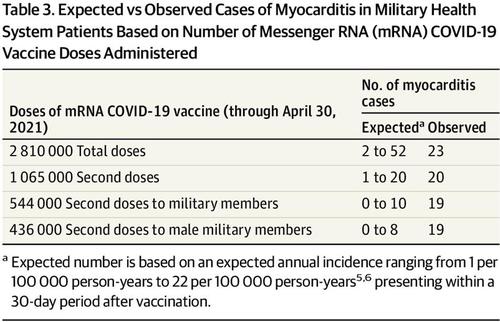 The study’s authors concluded that while the overall risk for patients who received an mRNA vaccine remains extremely small, the US isn’t alone in discovering these cases. Israel, which also relied on mostly on mRNA vaccines to  inoculate its population, is also seeing surprisingly high incidence of heart inflammation that’s likely linked to the vaccines.