Now 20 US states have legalized the practice of liquefying dead people, dumping their flesh goo down the sewage drains, harvesting the sewage as “biosludge” and spreading it on food crops as a form of fertilizer. (See absolute proof of this in the state government links below.)

Welcome to 2021 in America, where the dead are liquefied and fed to the living, almost like a scene ripped right out of The Matrix.

As LifeSiteNews now confirms, Wisconsin is the latest US state to legalize this practice, which is deceptively named “water cremation.” But it uses lye as the chemical ingredient that eats away human flesh, turning it into a slimy goo that’s washed off the bones using city water. This resulting “flesh goo” — often the remains of vaccine-murdered citizens — is flushed into the city sewer system and combined with raw human feces, light industrial waste, feminine hygiene products that are flushed down toilets, and other biohazard waste, then transformed into “biosludge” which is loaded onto trucks and dumped on food farms.

I created an entire feature film documenting this process, including the interview of a former top EPA scientist who tried to blow the whistle on this practice but was threatened and professionally destroyed by the EPA. That film is available to watch (for free) at Biosludged.com.

That scientist, David Lewis, even wrote a book documenting all this called, “Science For Sale.” For attempting to blow the whistle on the EPA-approved practice of mass pollution of US crop soils with biosludge, David Lewis was threatened by government goons and stripped of all funding for his environmental research on toxic substances in soils. If you thought the “science” behind the plandemic was insane, take a peek at the criminally insane “science” the EPA uses to justify the mass pollution of America’s soils.

Now, states like Wisconsin are adding liquefied human “flesh goo” remains to the biosludge cocktail, actually dumping human DNA and vaccine-originating RNA fragments onto food crops, apparently oblivious to the trans-genetic process of “transfection” that may wreak havoc on the sustainability of future food crops and soil microbiomes.

The timing of all this seems especially convenient, given that the vaccine death wave from Antibody Dependent Enhancement (ADE) may only be another 5-6 months away. It begs the question: What will cities and states do with all the dead bodies as the spike protein bioweapon achieves the depopulation goals of Fauci and Gates?

Answer: Flush them down the sewers and spread them on food crops as “fertilizer.” This puts dead humans into the food supply as an indirect form of cannibalism. Soon, if you eat non-organic product, you will be eating crops that are literally grown in human flesh goo.

This is not science fiction and it isn’t a conspiracy. You can read it right here in Wisconsin Senate Bill SB228: The use of alkaline hydrolysis to cremate human remains and providing an exemption from emergency rule procedures. 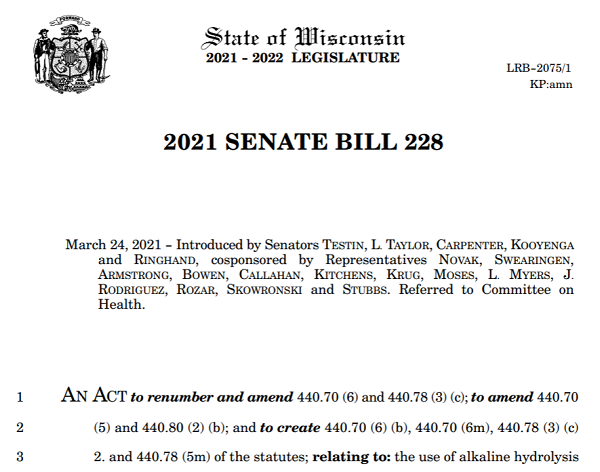 This is why “fact checkers” won’t touch this topic, because the facts are crystal clear. They don’t want to admit that covid vaccine-murdered human beings are being liquefied and spread on food crops all across America (in 20 states and counting).

It’s one more reason to eat organic, of course, since organic crops disallow the use of biosludge as fertilizer. Then again, we now have organic proponents signing up to be injected with the deadly covid vaccine, which means they may soon become an input for the food supply itself.

Listen to my shocking Situation Update podcast to learn the full truth about this stunning revelation: