A mere few months ago any mention in public discourse of Covid passports was written off by the mainstream media as but the ravings of “conspiracy theorists” consigned to remote corners of the internet making supposedly far-fetched slippery slope arguments. On Wednesday CNBC now writes, “As the rampant delta variant of Covid threatens the post-pandemic travel and tourism rebound, there’s growing acceptance of so-called vaccine passports among a one-hesitant U.S. public and of increased calls for their mandated use across the industry.”

Citing a recent survey by a travel industry website, CNBC informs its readers that, “A survey found 81.8% of Americans support the idea of vaccine passports, digital or physical proof of vaccination against Covid.” Looking forward, where are we headed? Australia seems to be providing the world with a ‘forward warning’ and dystopian glimpse of what will likely be enacted by many more governments across the globe assuming the Delta and other Covid variants continue to spread…

The above recent local Australian news broadcast is absolutely chilling given that citizens are informed in a peppy and bright ‘reassuring’ voice by the blond bombshell reporter that they essentially have no rights and no recourse whatsoever when it comes to Health Ministry directives.

Australians living overseas could be “trapped” in Australia if they return, after the nation’s government tightened its border rules without notice.

Since March last year, the country has banned its citizens from leaving the country as part of its Covid strategy. That restriction has not previously applied to Australians who usually live in other countries.

But they will now need to apply for an exemption for outbound travel – in line with rules for other Australians.

The smiling correspondent in the above clip seems to be almost gleeful as she informs her fellow Aussies, “Some Australians based overseas have told Sky News they don’t even know whether or not they’ll be able to return to the country they live in.”

Nobody can challenge the Health Minister’s directives.

Even under International law, Australia doesn’t have a Bill of Rights meaning no citizen can challenge the Governments decision.”

Perhaps the segment would have been easier if the broadcast simply informed citizens without elaborating (though with fewer smiles): “Now youse can’t leave”…

“This change will mean no matter where you live in the world, once you are in Australia you are formally trapped,” Professor Kim Rubenstein, who writes about citizenship law from the University of Canberra, told BBC Wednesday. 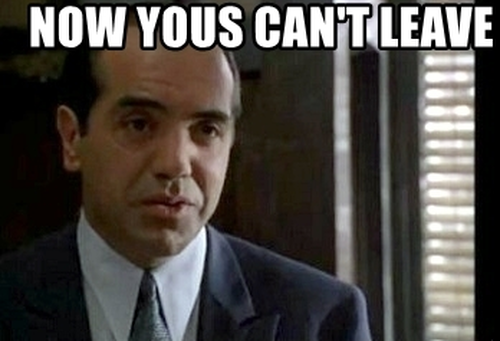