By RYAN MORRISON FOR MAILONLINE

A powerful holographic camera has been developed by scientists, and it is able to see though almost anything, including corners, fog, and even human flesh.

It works by indirectly scattering light onto hidden objects, which then scatters again and travels back to a camera, where AI is used to reconstruct the original object.

The team say it is a decade away from being commercially available, but when it is the technology could be used in cars, CCTV and even as a medical scanner.

One example could be to replace the use of an endoscope in colonoscopy, instead gathering the light waves to see around the folds inside the intestines.

A powerful holographic camera has been developed by scientists, and it is able to see though almost anything, including corners, fog, and even human flesh

1) Light waves from two lasers, a reference and sample beam, are fired at a virtual detector on a distant wall

2) The light field, including information on scattered light from hidden objects, is captured back into the camera

This is a relatively new field of research, known as non-line-of-sight (NLoS) imaging, and this technique can rapidly capture full-field images of large areas.

It does so with submillimeter precision, a level of resolution that an AI-driven camera could use to see through the skin, and see even the smallest capillaries working.

As the light is scattered on to hidden objects and scattered again back to the camera, an algorithm reconstructs the scattered light signal.

Due to its high resolution, the method also has potential to image fast-moving objects, such as the beating heart through the chest or speeding cars around a street corner.

While the method has obvious potential for noninvasive medical imaging, there are a wide range of applications.

This includes the creation of early-warning navigation systems for automobiles and industrial inspection in tightly confined spaces.

However, the researchers believe potential applications are endless.

‘Our technology will usher in a new wave of imaging capabilities,’ said Florian Willomitzer, first author of the study.

‘Our current sensor prototypes use visible or infrared light, but the principle is universal and could be extended to other wavelengths.

‘For example, the same method could be applied to radio waves for space exploration or underwater acoustic imaging. It can be applied to many areas, and we have only scratched the surface.’

Whether it is seeing around a corner, or looking at a pumping heart inside the body, the team say the solutions ‘actually closely related’.

This is because both rely on scattering media, in which light hits an object and scatters in a way that a direct image is no longer possible.

‘If you have ever tried to shine a flashlight through your hand, then you have experienced this phenomenon,’ Willomitzer said. 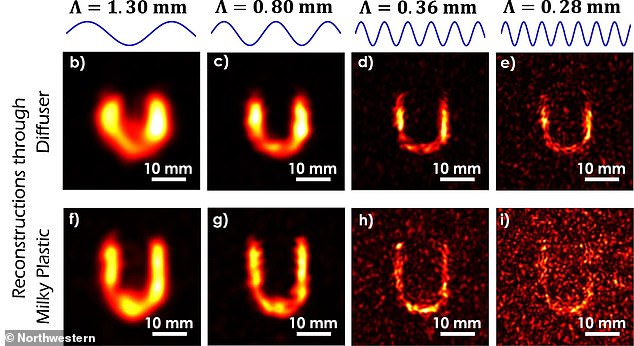 The team say it is a decade away from being commercially available, but when it is the technology could be used in cars, CCTV and even as a medical scanner

POTENTIAL USES OF THE TECHNOLOGY

Researchers have suggested a number of potential uses for the new light detection technology.

One concept is car mounted cameras that can see objects behind a blind corner, such as a stag or another car.

It could also be used to take images of the brain, heart or other organs without the need for radiation.

These can be used to see inside the colon, instead of a colonoscopy, or to image inside generators while running, without having to stop them.

‘You see a bright spot on the other side of your hand, but, theoretically, there should be a shadow cast by your bones, revealing the bones’ structure.

‘Instead, the light that passes the bones gets scattered within the tissue in all directions, completely blurring out the shadow image.’

The goal of the project was to intercept scattered light in order to reconstruct the information contained within the light – including its time of travel.

‘Nothing is faster than the speed of light, so if you want to measure light’s time of travel with high precision, then you need extremely fast detectors,’ Willomitzer said.

‘Such detectors can be terribly expensive,’ the scientists explained.

They wanted to find a way to get rid of fast detectors, and did so by merging light waves from two lasers in order to generatic a ‘synthetic light wave’.

This can be tailored to holographic imaging in different scattering scenarios, they explained, adding that if you can capture the entire light field of an object in a hologram, you can then reconstruct its 3D shape in full.

‘We do this holographic imaging around a corner or through scatterers — with synthetic waves instead of normal light waves.’

One example could be to replace the use of an endoscope in colonoscopy, instead gathering the light waves to see around the folds inside the intestines 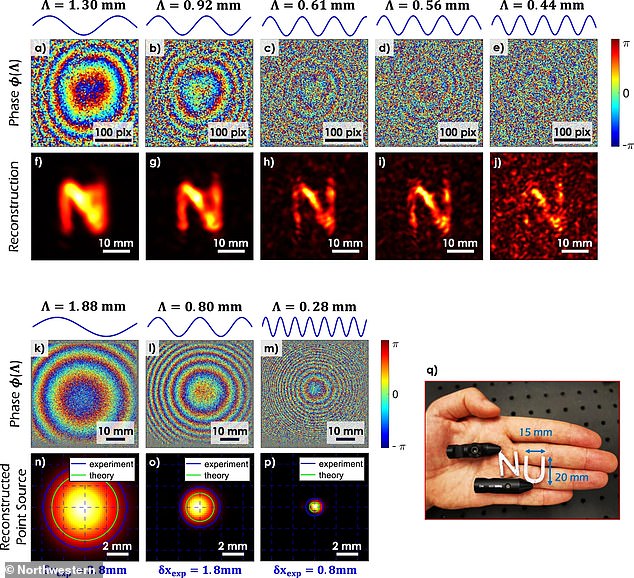 This is a relatively new field of research, known as non-line-of-sight (NLoS) imaging, and this technique can rapidly capture full-field images of large areas

An artificial intelligence system that allows self-driving cars to ‘see’ around corners in real time could help prevent accidents, according to its developers.

Researchers from Stanford University in the USA have created a system that bounces a laser beam off a wall to create an ‘image’ of objects hidden from view.

The ‘image’ captured won’t make sense to a human, but using artificial intelligence technology the system can create a visual reconstruction of the hidden view.

The research was funded by US government agency DARPA (Defence Advanced Research Projects Agency), and is one of a number of similar technology programmes being developed.

It could also be used by soldiers to see around walls, rescue workers searching for people and even in space travel to examine the interior caves of an asteroid.

Other issues with earlier attempts have been the time a scan has taken, or requiring a very large probing area to measure the scattered light.

The new technology overcomes the issues, and can image around corners and through other forms of media – such as skin and metal – at higher resolution.

It means the camera can image tiny features in tightly confined spaces, as well as hidden objects in larger areas at a higher resolution.

It can even do so when the target object is moving – such as another car in a road around a blind corner.

Because light only travels on straight paths, an opaque barrier, such as a wall, bush or car, must be there for the new device to see around corners.

The light is emitted from the sensor unit bounces off the barrier, then hits the object around the corner.

The light then bounces back to the barrier and ultimately back into the detector of the sensor unit.

‘It’s like we can plant a virtual computational camera on every remote surface to see the world from the surface’s perspective,’ Willomitzer said.

‘This technique turns walls into mirrors,’ he said, adding that ‘it gets better as the technique also can work at night and in foggy weather conditions.’

They suggest it could be used to replace, or supplement, endoscopes that are used in medical and industrial imaging, for example, by using light to see around the folds inside the intestines, instead of sending a flexible camera for colonoscopy.

It could also be used to image inside large industrial equipment, such as turbines in a generator, while it is still running, reducing distruption.

It is currently a prototype and is up to ten years from being a commercial product, in part due tot he time it would take to get medical approval.

The study was published November 17 in the journal Nature Communications.