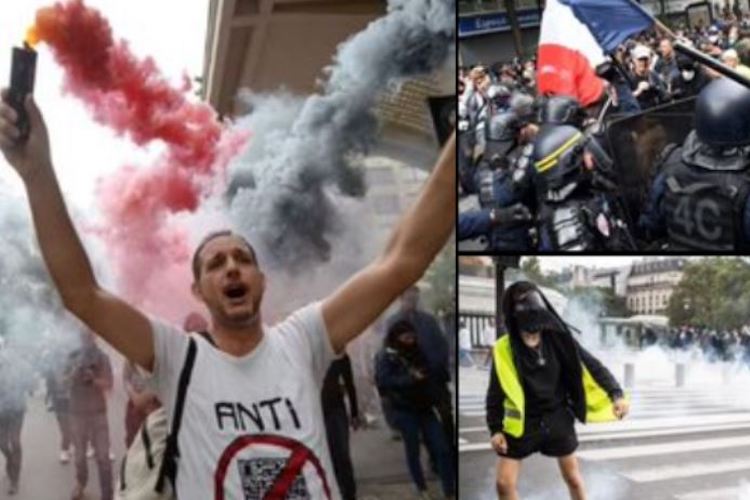 Tens of thousands of people across several countries, including France, the UK, and Israel, have demonstrated against new anti-COVID restrictions, with the majority of the protests held in the Paris metropolitan area.

According to Reuters, in Paris and other French cities, more than 200,000 protesters flooded streets on Saturday, outraged about COVID-19 health passes. The passports were introduced as Europe is in the midst of the fourth wave of virus infections.

President Emmanuel Macron’s latest measures have resulted in the third week of protests. The new passports are for fully vaccinated people, those who have natural immunity, and or test negative for the virus within 72 hours. The passes must be shown before entering public transportation, bars, restaurants, and other public venues.

The health passes are directed at forcing those who are not vaccinated to get immunized.

However, when the government treads on freedom and forces a segment of the population to take an experimental vaccine, there will be blowback, especially when the first round of vaccinations were supposed to liberate folks and return life to normal.

Now there’s more restrictions, less freedom, and the government wants to continue feeding people an experimental drug. People are beginning to turn on the government:

“We’re creating a segregated society and I think it is unbelievable to be doing this in the country of human rights,” Anne, a teacher who was demonstrating in Paris, told The Guardian. She refused to give her last name.

“So I took to the streets; I have never protested before in my life,” Anne added. “I think our freedom is in danger.”

Protesters were also out in other metros, including Marseille, Lyon, Montpelier, Nantes, and Toulouse, yelling “Freedom!” and “No to the health pass!”

Meanwhile, hundreds of anti-vaxxers protested in the streets of downtown London Saturday. Many folks were accompanied by their children and were infuriated that the government wanted to vaccinate kids.

In Israel, hundreds took to the streets of Tel Aviv to protest the government’s new virus restrictions, such as reimposed mask requirements indoors and health passes.

The Delta variant worldwide has forced countries to reimpose COVID restrictions and implement health passes to mitigate the virus spreading. The government interfering with the lives of its citizens and whittling their freedoms has resulted in mass unrest.