If you spend too much time observing the way politicians speak, you’ll pick up an almost perceptibly mechanical gear-shift in their heads when the brain-groove reminds them to reproduce an anecdote or talking point they have formulated so many times before. Occasionally the subconscious rebels against the alienating monotony with apologetic prefix clauses like, “That’s why I like to say,” or “I always tell the story that,” but the pre-sets mostly override such human twitches to deliver the desired political result.

So it was for President Joe Biden’s counterproductive “pandemic of the unvaccinated” slogan, which the White House COVID-19 Response Team introduced in mid-July, and which the president was still regurgitating inaccurately as late as December 14.

In a local TV interview with News Center 7 in Dayton, Ohio, the president was asked about whether his administration would continue fighting his contested employer vaccine mandates in court. The politician-brain quickly whirred into gear.

“This is a pandemic of the unvaccinated. The unvaccinated. Not the vaccinated, the unvaccinated,” Biden emphasized, on the same day that the omicron variant produced a one-day positive-case increase of 16 percent in highly vaccinated New York City. “That’s the problem. And so everybody talks about ‘freedom,’ and not to have a shot or have a test. Well guess what? How about patriotism? How about making sure that you’re vaccinated, so you do not spread the disease to anybody else? What about that?”

What about that indeed. New York City’s one-shot vaccination rate (of 92 percent for adults, 83 percent for kids between 13 and 17) “rivals any number in the free world,” Politico’s Jack Shafer observed last week, and yet somehow my vaccinated teen and boosted self spent Christmas under quarantine. The fact-checkers over at The Poynter Institute’s PolitiFact generously rated Biden’s “vaccinated…do not spread the disease” claim as only “mostly” false, despite epidemiologist quotes like “[the] statement is not accurate,” and “vaccinated individuals can definitely infect other people.”

But the problems with the “pandemic of the unvaccinated” message pre-date the variant that rendered it factually ludicrous. On September 16, one week after Biden reversed serial administration promises by announcing an employer vaccine mandate (while using language such as “We’ve been patient, but our patience is wearing thin. And your refusal has cost all of us”), science writer Yasmin Tayag penned an Atlantic piece headlined “Stop Calling It a ‘Pandemic of the Unvaccinated.'”

“Bullying the unvaccinated into getting their shots isn’t going to work in the long run,” Tayag predicted, in a piece surveying a field of study (behavioral science) to which the White House seems oblivious. “The way the mandates are being presented is driving a wedge between the vaccinated and the unvaccinated. If the goal is to inoculate enough people to reach herd immunity, this approach may eventually backfire.”

So how have mandates worked in practice? The New York Times on December 18 published a survey of all 50 states and the country’s largest 100 cities, and concluded that the government orders “have not provided the significant boost to state and local vaccination rates that some experts had hoped for.” To the contrary: “In most locations, the number of adults with at least one shot grew at a slower pace after states and cities announced mandates than it did nationwide in the same time periods.”

“Mandates might help for people who are just finding it inconvenient, but have no really legitimate reason to not get the vaccine,” Lisa Cooper, director of the Johns Hopkins Center for Health Equity, told the Times. “But then you have people who have strong beliefs against it or who really have significant other struggles, and the mandates are not going to do anything for those people.”

The Times notes that—at least until and unless Biden’s employer mandate passes legal muster—the vast majority of government vaccination orders take place in Democratic-voting, high-vaxxed polities: “In almost all of these states and in all of the counties surrounding the cities with mandates, a majority of the residents voted for President Biden. Statewide mandates tend to be most popular along the West Coast and in the Northeast, whereas states banning some mandates tend to be clustered in the South.”

So if vaccine mandates aren’t moving the needle on vaccination, what, precisely, are they for? One particularly ungenerous hypothesis is hard to avoid. Rebranding COVID-19 as the “pandemic of the unvaccinated,” then targeting that population with punishments for noncompliance, has been a way to scapegoat political opponents and technology companies, while bolstering the sense of virtuousness among the vaxxed.

Those dynamics were present at the creation of the re-brand. The same week that the White House COVID-19 Response Team began telling vaccinated people that the pandemic was now for those other people, Surgeon General Vivek Murthy called for a “whole-of-society” effort to combat “health misinformation,” then Biden just flat-out accused Facebook and other social media companies of “killing people.”

Then in the same week that Biden announced his vaccine mandate, he also charged prominent GOP officials with being “cavalier” about whether children lived or died. “Republican governors in states like Texas and Florida are doing everything they can to undermine the public health requirements that keep people safe,” the president tweeted. “They’re playing politics with the lives of their citizens, especially children. I refuse to give in to it.”

Biden’s entire speech unveiling his vaccine mandate was dripping with irritation for Americans who had yet to get a shot, and for politicians who were not sufficiently on board with his COVID policies. A selection:

This is a pandemic of the unvaccinated. And it’s caused by the fact that despite America having an unprecedented and successful vaccination program, despite the fact that for almost five months free vaccines have been available in 80,000 different locations, we still have nearly 80 million Americans who have failed to get the shot.

And to make matters worse, there are elected officials actively working to undermine the fight against COVID-19. Instead of encouraging people to get vaccinated and mask up, they’re ordering mobile morgues for the unvaccinated dying from COVID in their communities. This is totally unacceptable. […]

That 25 percent [of unvaccinated people] can cause a lot of damage—and they are. The unvaccinated overcrowd our hospitals, are overrunning the emergency rooms and intensive care units, leaving no room for someone with a heart attack, or [pancreatitis], or cancer. […]

[W]hat makes it incredibly more frustrating is that we have the tools to combat COVID-19, and a distinct minority of Americans—supported by a distinct minority of elected officials—are keeping us from turning the corner. These pandemic politics, as I refer to, are making people sick, causing unvaccinated people to die.

We cannot allow these actions to stand in the way of protecting the large majority of Americans who have done their part and want to get back to life as normal. […]

The message given here to the vaccinated is mixed bordering on schizophrenic. This is a pandemic of the unvaccinated does not jibe with vaccinated workers need protection from unvaccinated workers. In a speech touting the urgent need for vaccination, Biden is saying that getting vaccinated cannot be a ticket back to normal life until we deal with those foolish anti-vaxxers. Rather than encourage the kind of social cohesion that correlates best with high inoculation rates, the president is telling one bloc of voters it’s OK to be pissed off at the other.

Writing in The Lancet last month under the headline “Stigmatising the unvaccinated is not justified,” epidemiologist Günter Kampf laid out the practical drawbacks to Biden’s approach.

“People who are vaccinated have a lower risk of severe disease but are still a relevant part of the pandemic,” Kampf wrote. “It is therefore wrong and dangerous to speak of a pandemic of the unvaccinated. Historically, both the USA and Germany have engendered negative experiences by stigmatising parts of the population for their skin colour or religion. I call on high-level officials and scientists to stop the inappropriate stigmatisation of unvaccinated people, who include our patients, colleagues, and other fellow citizens, and to put extra effort into bringing society together.”

The pandemic of the unvaccinated framing actively encouraged one of the uglier and least productive societal reactions to COVID-19: Making the mere fact of contracting the virus a morality play falling largely along partisan lines. The whole notion that by “doing everything right,” and “following all the rules,” you will be righteously spared, unlike those anti-science people this summer down south.

That self-flattering narrative is collapsing, now that (as predicted) a stubbornly seasonal/regional virus has hit media/Democratic centers for a third consecutive winter. “Thousands who ‘followed the rules’ are about to get covid,” ran the headline on a Washington Post “Wellness” column last week. “They shouldn’t be ashamed.” Lovely sentiment, that.

If the public health goal is to prevent unnecessary deaths by persuading fence-sitters to take the life-saving vaccine, there are many strategies that strike me as more potentially effective than scapegoating, marginalizing, and punishing a population that’s already disproportionately suffering from the disease. Starting with maybe studying, you know, behavioral science.

Outgoing National Institutes of Health (NIH) Director Francis Collins did an interview with NPR this month that included this startling admission: “I do think we need to understand better how—in the current climate—people make decisions….To have now 60 million people still holding off of taking advantage of lifesaving vaccines is pretty unexpected. It does make me, at least, realize, ‘Boy, there are things about human behavior that I don’t think we had invested enough into understanding.'” Boy!

Next, politicians and public health officials might consider telling the whole relevant truth as they know it, rather than the partial bowdlerized truth as they mold it to shape public behavior.

It’s not just Biden busting the fact-check-o-meters; it’s Centers for Disease Control and Prevention (CDC) Director Rochelle Walensky, as Jacob Sullum pointed out just today: “Time and again during the COVID-19 pandemic…Walensky has proven herself untrustworthy. The latest example is Walensky’s slippery response to criticism of a study that she has repeatedly cited to justify the CDC’s controversial recommendation that K–12 schools require students to wear face masks as a safeguard against COVID-19.”

This doesn’t mean sugarcoating the vastly different outcomes among the Covid-positive vaxxed and unvaxxed—far from it. This graph is far more compelling to me than sitting through yet another rambly Joe Biden speech: 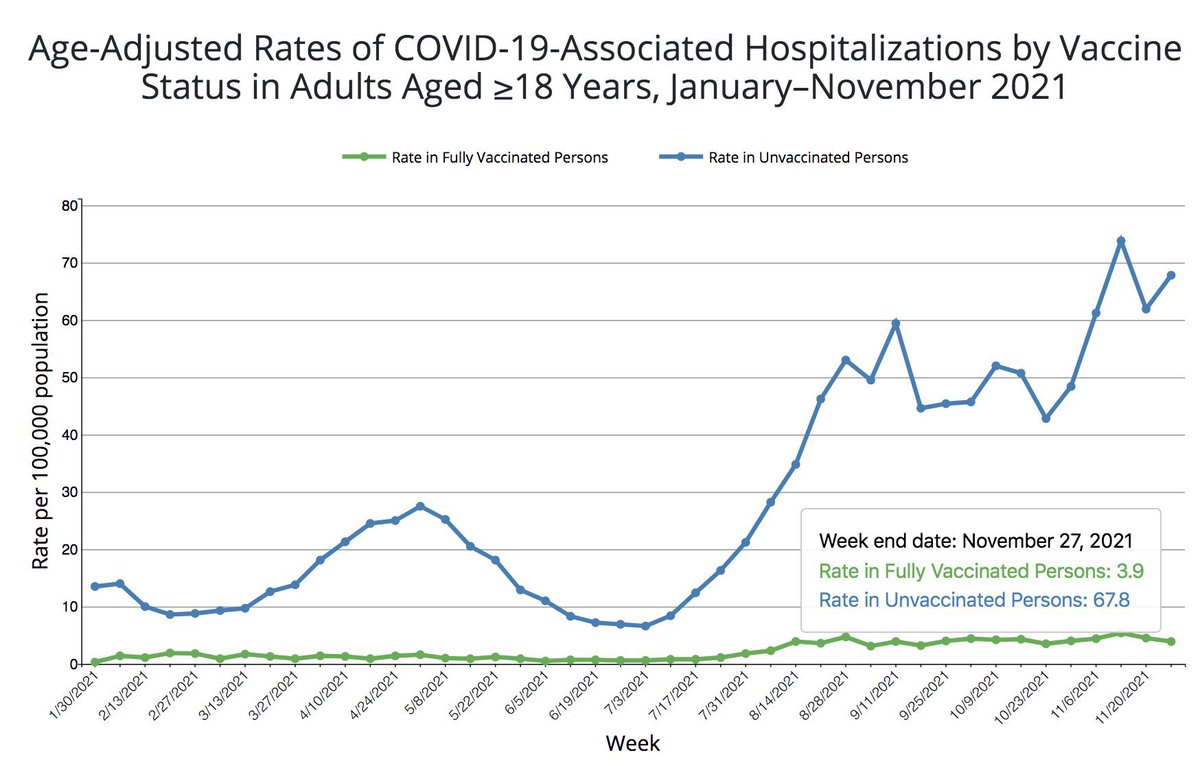 But the above should also serve a message to us vaccinated Americans: It looks like, on balance, we’re going to come out of this omicron infection all right. Maybe instead of directing rage at a subset of our fellow countrymen who are getting seriously ill in disproportionate numbers, we should personally live as though we are in an endemic, and otherwise try to persuade our recalcitrant loved ones that this mild cough and week-plus indoors is a damn sight better than the alternative. Politicians might not be able to shut off their internal machinery of rhetorical division, but weren’t you supposed to be better than all that?