Revered scientific journal The Lancet has created a ‘task force’ to investigate the origins of the coronavirus that caused a global pandemic, yet it has decided to employ as its leader the very guy who funded the dangerous gain of function research at the Wuhan lab and subsequently allegedly ‘bullied’ other scientists into avoiding looking into the lab as a potential source of the outbreak. 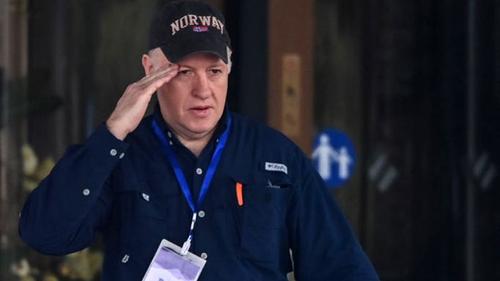 In the wake of renewed scrutiny of the lab leak hypothesis, the Lancet’s task force will reportedly “focus on analyzing data on all of the theories put forward on the origins of COVID, on the reasons why SARS-CoV-2 was able to break out of Wuhan and spread globally, and on the most plausible strategies to prevent future pandemics.”

It also states that “The Task Force will review thoroughly and objectively all publicly available evidence, particularly the peer-reviewed literature, and conduct interviews with key leaders in science, medicine, policy and civil society.”

Dr Peter Daszak, who is heading up this task force, is perhaps the least suitable scientist on the planet to objectively analyse the data, given his track record.

Daszak, as President of the EcoHealth Alliance, shovelled at least $600,000 to the Wuhan Institute of Virology in the past few years to play around with coronaviruses inside the lab through the now infamous ‘gain of function’ research.

Daszak, who also works for the World Health Organisation, is on record admitting that he was involved with manipulating coronaviruses. Here is a video of him talking in DECEMBER 2019 about how ‘good’ the viruses are for altering in a lab:

Daszak notes that “coronaviruses are pretty good… you can manipulate them in the lab pretty easily… the spiked proteins drive a lot about what happens. You can get the sequence you can build the protein, we work with Ralph Baric at UNC to do this, insert into the backbone of another virus and do some work in a lab.”

No wonder then that Daszak as lead investigator for the WHO investigation  determined within 3 hours of visiting the Wuhan lab in February 2021 that there was ‘nothing to see here’?

Recently released emails now document that Daszak thanked Dr Fauci for dismissing the lab leak theory before any scientific research had been done on the possibility. 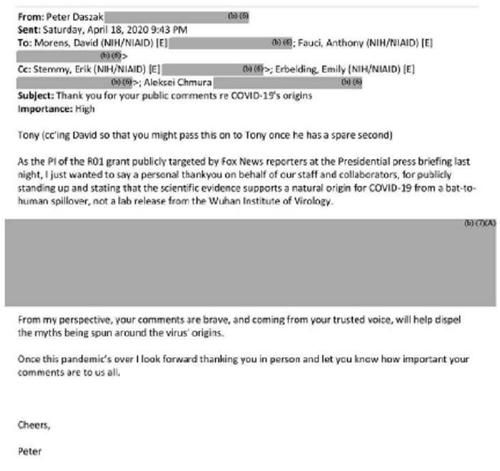 Daszak was later employed as an ‘expert fact checker’ by Facebook when it was monitoring and removing ‘misinformation’ about the origins of COVID on its platform, much of which was credible scientific research. Facebook has since reversed the policy of banning any posts containing information suggesting COVID-19 was “man-made”.

Daszak’s Twitter profile is basically one long ‘it came from bats not a lab’ thread, much to the annoyance of some other scientists:

Why does this guy keep getting put in charge of investigations, task forces and ‘fact checking’, when it’s abundantly clear that he has the biggest motive to dismiss the lab leak notion?

As microbiologist Professor Richard Ebright has noted, “Daszak was the contractor who funded the laboratory at the Wuhan Institute of Virology that potentially was the source of the virus with subcontracts from $200million [£142million] from the US Department of State and $7million [£5million] from the US National Institutes of Health and he was a collaborator and co-author on research projects at the laboratory.”

Daszak has already lied about the type of research that was being conducted at the Wuhan lab, claiming, after the outbreak happened, that he didn’t know if it was gain of function or not. His own previous statements, and the Fauci emails prove he knew full well what was going on in the lab.

In addition, as reported by The Daily Mail and other outlets, Daszak “orchestrated a ‘bullying’ campaign and coerced top scientists into signing off on a letter to The Lancet aimed at removing blame for Covid-19 from the Wuhan lab he was funding with US money.”

Daszak used his influence to get the journal to publish the letter, which stated that to even suggest the lab leak theory had any credibility was equal to spreading “fear, rumours, and prejudice.”

It effectively shut down discussion among the scientific ‘consensus’ of the lab leak potential for a whole year until intelligence findings brought the matter back to the attention of the mainstream media.

WHO scientific advisor Jamie Metzl described Daszak’s letter as “scientific propaganda and a form of thuggery and intimidation.”

“By labelling anyone with different views a conspiracy theorist, the Lancet letter was the worst form of bullying in full contravention of the scientific method,” Metzl added.

The letter further stated that “We stand together to strongly condemn conspiracy theories suggesting that Covid-19 does not have a natural origin,” and even had the audacity to state that “We declare no competing interests.”

Indeed, Daszak had made sure that the letter would be devoid of any link to EcoHealth, and even considered leaving his own name off it, emails released via the Freedom of Information Act have revealed.

To make matters worse, the other members of The Lancet’s task force are practically all minions of Daszak, some of whom helped him draft the letter that unequivocally stated the lab leak theory was dangerous, and others who either worked with him on ‘fact checking’ for Facebook, or were cited as sources during that activity.

Taking all this into account, it is obvious what the outcome of The Lancet’s inquiry will be, and it should not and cannot be used as credible evidence against the lab leak theory.