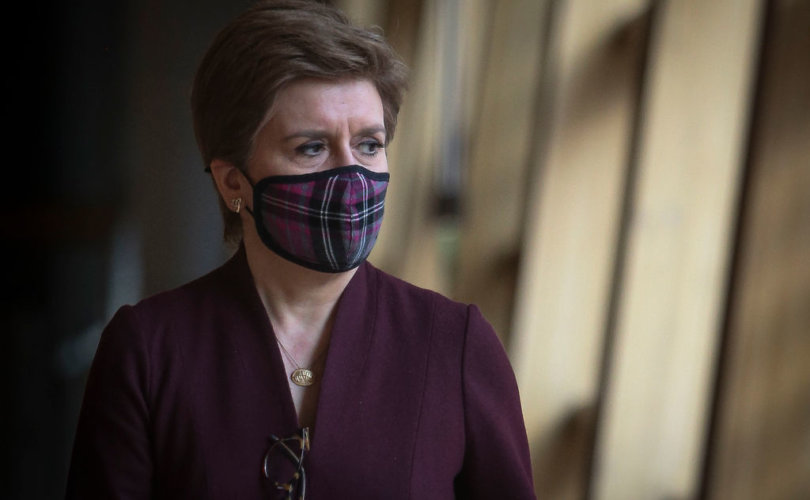 EDINBURGH, Scotland (LifeSiteNews) — The Scottish government has said it will begin lifting COVID-19 restrictions by the end of next month, ditching its divisive vaccine passport scheme starting Monday while leaving mask mandates in place for a further three weeks.

In a speech to the Scottish Parliament on Tuesday, Scottish Nationalist leader and First Minister of Scotland Nicola Sturgeon announced plans to “return to a normal way of life,” vowing to end all COVID-related restrictions by March 21.

The country’s COVID certification scheme — which requires large venues and nightclubs to grant access only to the fully COVID jabbed — “will come to an end next Monday,” she said.

As of March 21, Sturgeon continued, “assuming no significant adverse developments in the course of the virus, we expect that the legal requirement to wear face coverings in certain indoor settings and on public transport will be converted to guidance.”

Although it is removing the legal mandate, the government “will continue to strongly recommend the wearing of face coverings.” No evidence was provided to show the necessity of maintaining the face mask rule for another four weeks; however, evidence continues to mount showing face masks provide no “statistically significant” benefit to stopping the spread of the virus.

Sturgeon said that she also intends to end the legal requirement on “businesses and service providers to retain customer contact details,” a measure used as part of the public health system’s “Track and Trace” program, on March 21.

COVID testing will still be available and encouraged by the government, which will continue to ask individuals who test positive to self-isolate, though obeying the request has never been a legal requirement in Scotland.

While Sturgeon has said the requirement to prove one’s COVID inoculation status will be removed as a legal requirement, “the app which supports the scheme will remain operational,” she explained, leaving “any business which wishes to continue COVID certification on a voluntary basis” with the option to enforce such a rule.

“Far from abolishing COVID ID cards, this will normalise their use by some businesses, perhaps indefinitely,” Liberal Democrat leader Alex Cole-Hamilton charged. “From now on venues will have carte blanche to ask for private medical information without a public health imperative.”

Furthermore, the administration has had its emergency powers, granted through the 2020 Coronavirus Act, extended until at least September 24, six months after the last restrictions will be dropped. Sturgeon pushed to have coronavirus powers extended indefinitely last month, apparently to ensure the government could combat “future public health threats,” earning her wide criticism as having “gone power mad.”

Sturgeon defended saying that future outbreaks of infection were possible and that “contingency measures” must be kept for such an event, despite acknowledging that her government should not “impose legal restrictions when it is disproportionate to do so.”

After stating that the novel coronavirus poses a reduced threat to public health as time goes on, the first minister said that she is “therefore duty bound to remove legally imposed restrictions.”

Meanwhile, Public Health Scotland has stopped publishing weekly COVID “cases, hospitalisations, and deaths by vaccination status” after data showed that the “fully vaccinated” were up to four times more likely to die with a COVID infection than those who had not received the jabs.

2 thoughts on “Scottish gov’t to lift all COVID restrictions, will keep emergency powers as ‘contingency measures’”