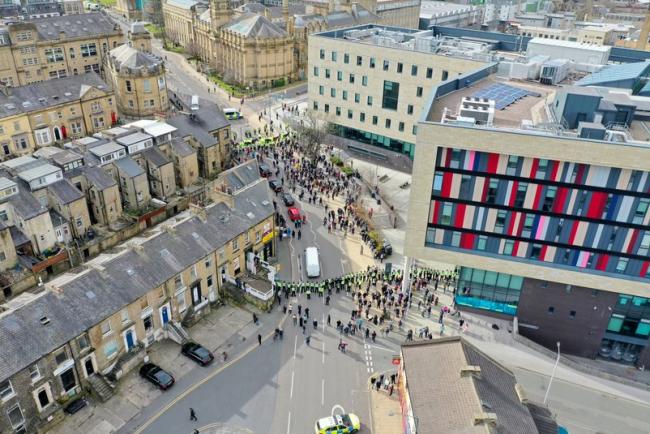 The anti-lockdown protest in Bradford in March. Pic: Gary Brown

A BRADFORD solicitor has called his recent case which was dropped by the CPS as a “game changer” in Coronavirus prosecutions.

Sajad Chaudhury successfully had charges against his client discontinued by the Crown Prosecution Service by arguing the Covid regulations were in breach of human rights laws.

Amar Sattar, 36, of Fell Lane, Keighley, had been charged with organising the Unite the North anti-lockdown, anti-vaccine protest held in Bradford in March, but earlier this week following the presentation of legal argument the CPS dropped the case as there was not “realistic prospect of conviction”.

Mr Chaudhury said the Health Protection (Coronavirus, Restrictions) (All Tiers) (England) Regulations 2020, hastily passed by the Government last year to enforce lockdowns on people and businesses, were flawed, and the outcome of his case is a landmark case which will lead to “thousands” of cases being dropped by the CPS, and potentially thousands of fines already handed out needing to be revisited.

He said: “We made an abuse of process argument; basically, this law is in contravention of the European Convention on Human Rights.

“Specifically Articles 10 and 11, which relate to freedom of expression and the freedom to assemble.

“In the Government’s response to Covid, they published a draft where they accepted the law was passed too quickly.

“Most people think that it restricts their right to protest, which it does not and cannot as the European Convention on Human Rights supersedes these laws.

“The Government have accepted this, and it is filtering down to the courts now. The Covid regulations are secondary legislation to the ECHR.

“This case will be a game changer and will impact so many other cases.

“It’s going to explode as thousands of cases come through the system.

“People have been coming to court and pleading guilty and don’t even know this argument exists.

“We need a root and branch review of all the processes and the Covid regulations.”

Mr Sattar said he had attended the protest for his own reasons, and assisted police to ensure it went ahead smoothly, but had no role in its organisation.

He was subsequently arrested and charged, what he called the “worst day of his life” and said the whole process was “very distressing”, and that the outcome had “restored his faith in the justice system”.

Article 10 of the European Convention of Human Rights states people have the “right to freedom of expression, which shall include freedom to hold opinions and to receive and impart information and ideas without interference by public authority”.

Article 11 states the right of freedom of assembly and association, and “no restrictions shall be placed on the exercise of these rights other than such as are necessary…  in the interests of public safety… and for the protection of health”.

The United Kingdom has been a founder member of the European Court and Convention of Human Rights since it was formed in 1949 by the Council of Europe.

The UK remains bound by the court and convention despite no longer being a member of the European Union, which is and entirely separate entity.