Authored by Raul Ilargi Meijer via The Automatic Earth blog,

Why the Delta scare? 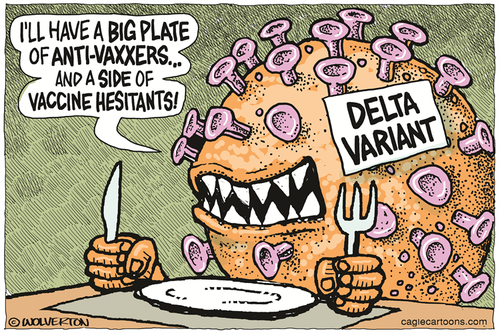 And no, that’s not because of unvaccinated people, or at least there’s no logic in that. If most people are not vaccinated, the virus has no reason to mutate. If many people are, it does. So this CNN piece is suspect. Vaccinated people are potential variant factories, just as much, if and when the vaccines used don’t stop them from being infectious, as the present vaccines don’t, far as we know.

“Even more serious”? Well, yes, it can become more contagious, but then it loses lethality. Maybe that’s what we want. Maybe we want a virus that everyone can be infected by, and build resistance to, without serious consequences. Maybe that’s even what we should aim for. And also, maybe that’s what we already have, with survival rates of 99.99% among most people.

And maybe, just maybe, a one-dimensional “solution” in the shape of an experimental vaccine is the worst response of all. Because it doesn’t protect from anything other than more severe disease, while unleashing potential adverse effects for decades to come in the inoculated. Maybe one dimension simply doesn’t cut it. Maybe we should not refuse to prevent people from becoming infected, or to treat them in the early stages of the disease.

Maybe the traumatic effects of lockdowns and facemasks should be part of “benefits and risks” models. And maybe we should start trying vitamin D, ivermectin and HCQ on a very large scale. No research, you say? There’s more research for those approaches than for the vaccines. But it’s largely been halted in the west to maintain the viability of the one-dimension “solution”; the medical Siamese twin of the Trusted News Initiative, one might say. Of which The Atlantic is also a valued member, look at this gem:

The 3 Simple Rules That Underscore the Danger of Delta

2. The variants are pummeling unvaccinated people.

The U.K., where half the population is fully vaccinated, “can be a cautionary tale,” Hanage told me. Since Delta’s ascendancy, the country’s cases have increased sixfold. Long-COVID cases will likely follow. Hospitalizations have almost doubled. That’s not a sign that the vaccines are failing. It is a sign that even highly vaccinated countries host plenty of vulnerable people.

[..] And new variants are still emerging. Lambda, the latest to be recognized by the WHO, is dominant in Peru and spreading rapidly in South America. Many nations that excelled at protecting their citizens are now facing a triple threat: They controlled COVID-19 so well that they have little natural immunity; they don’t have access to vaccines; and they’re besieged by Delta.

First, the vaccines don’t confer immunity on the jabbed, there is no evidence of that. Second, a large majority of healthy people have an immune system strong enough to fight off the infection, even without ever being infected. So to suggest that unvaccinated people might “gain some protection from the immunity of” the vaccinated is simply nonsense.

As for “Delta’s ascendancy”, yes, cases are rising in the UK and Israel, two highly vaccinated countries. Not that anyone would acknowledge a possible connection there: it’s all despite the vaccines, not because of them. But as the graph below shows, while cases there are up a lot, hospitalization and deaths are not over the past month. They barely register. 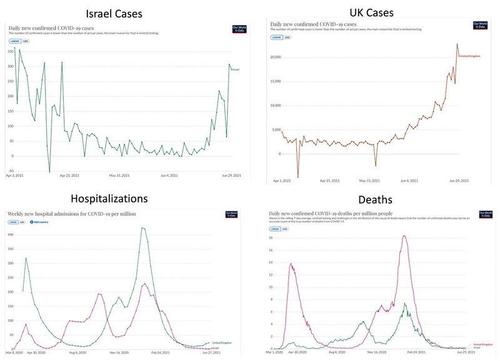 I even enlarged the hospitalizations a bit, or you wouldn’t see anything. 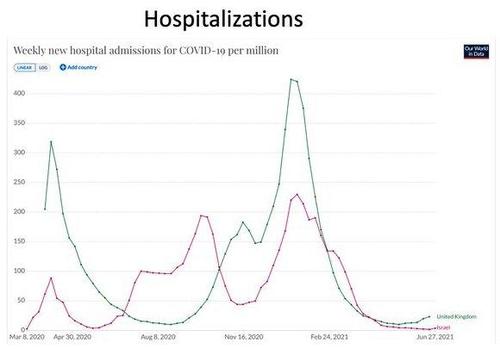 “Hospitalizations have almost doubled”, says The Atlantic. Yeah, but they’re still very low, as are deaths. And perhaps that’s not all that surprising, because the Delta variant doesn’t appear to be the big killer that everyone wants to close their borders and restaurants for again. There’s no conclusive evidence, it’s too early, but this is what we know today.

Kentucky GOP Sen. Rand Paul is telling Twitter followers to not let the ‘fearmongers’ win, amid growing concerns about the newest delta variant of the coronavirus. Paul, who is a doctor with a degree in medicine from Duke University, cited a study of the strain that shows only a 0.08% death rate among unvaccinated people. “Don’t let the fearmongers win. New public England study of delta variant shows 44 deaths out of 53,822 (.08%) in unvaccinated group. Hmmm,” he tweeted Tuesday to his 3.2 million followers. The variant, which has caused virus outbreaks in Australia and other countries, has resulted in officials reimposing recently lifted health-safety orders including mask-wearing.

In another graph, the Delta variant Case Fatality Rate in the UK even appears 8 times higher among the fully vaccinated than the unvaccinated. Maybe the press should pay a little more attention to that, instead of the Great Big Delta Scare. All they do today is sell fear and vaccines, but that will backfire, promise. 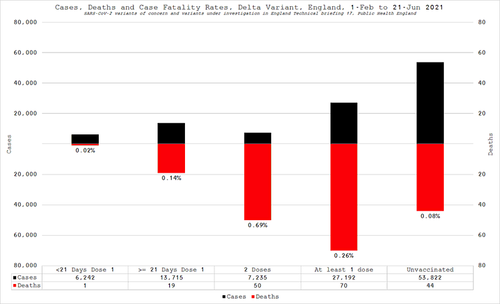 And what goes for the press is also valid for politicians and their “experts”: there will come a day that people realize you could have focused on prophylactics and early treatment, but chose not to. And that this cost a lot of lives and other misery. What are you going to do then? Apologize?

Let’s not miss this from the past week: strong immune systems kill the virus before antibodies are formed. Which means an antibody test won’t show anything, but a PCR test will come back positive because there are dead virus bits. And everyone will cry: vaccinate! vaccinate!

Maybe it’s finally time for some real science, instead of clickbait and fear and gene therapy.

Individuals with likely exposure to the highly infectious SARS-CoV-2 do not necessarily develop PCR or antibody positivity, suggesting some may clear sub-clinical infection before seroconversion. T cells can contribute to the rapid clearance of SARS-CoV-2 and other coronavirus infections1–5 . We hypothesised that pre-existing memory T cell responses, with cross-protective potential against SARS-CoV-26–12, would expand in vivo to mediate rapid viral control, potentially aborting infection.

We studied T cells against the replication transcription complex (RTC) of SARS-CoV-2 since this is transcribed first in the viral life cycle13–15 and should be highly conserved. We measured SARS-CoV-2-reactive T cells in a cohort of intensively monitored healthcare workers (HCW) who remained repeatedly negative by PCR, antibody binding, and neutralisation for SARS-CoV-2 (exposed seronegative, ES).

16-weeks postrecruitment, ES had memory T cells that were stronger and more multispecific than an unexposed pre-pandemic cohort, and more frequently directed against the RTC than the structural protein-dominated responses seen post-detectable infection (matched concurrent cohort). The postulate that HCW with the strongest RTC-specific T cells had an abortive infection was supported by a low-level increase in IFI27 transcript, a robust early innate signature of SARS-CoV-2 infection16.

We showed that the RNA-polymerase within RTC was the largest region of high sequence conservation across human seasonal coronaviruses (HCoV) and was preferentially targeted by T cells from UK and Singapore pre-pandemic cohorts and from ES. RTC epitope-specific T cells capable of cross-recognising HCoV variants were identified in ES. Longitudinal samples from ES and an additional validation cohort, showed pre-existing RNA-polymerase-specific T cells expanded in vivo following SARS-CoV-2 exposure, becoming enriched in the memory response of those with abortive compared to overt infection. In summary, we provide evidence of abortive seronegative SARS-CoV-2 infection with expansion of cross-reactive RTC-specific T cells, highlighting these highly conserved proteins as targets for future vaccines against endemic and emerging Coronaviridae.