Ireland is Discussing Abolishing Personal Property Rights. Are We Next? 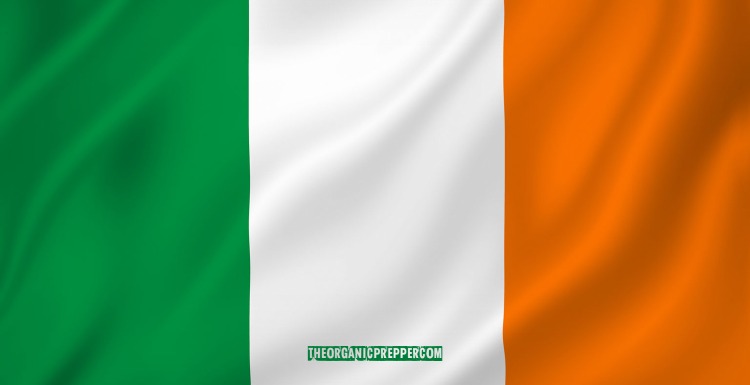 Refugees have been pouring out of Ukraine since February. Approximately 5.5 million Ukrainians have left the country as of May 2, 2022. Many of the refugees have gone to stay with relatives abroad, which seems natural.

But what about the millions without personal connections overseas?

Not surprisingly, virtue-signaling politicians in the European Union and the United States quickly opened their borders. However, providing immediate housing for that many people presents a huge logistical challenge. 5+ million is just a lot of people. Resources in many European countries have already been tapped out by the waves of refugees from war-torn areas in the Middle East.

So, some European countries have been offering money to households that voluntarily take in Ukrainian refugees.

What could possibly go wrong here?

For starters, not everyone opening their homes is a Good Samaritan. Every nation has predators, and when you leave your home due to fear of violence, you may just be running from one set of problems to another.

Within a month of the U.K.’s program paying households £350 per month to host refugees, female refugees were asking to be re-homed after unwanted sexual advances.

For Irish hosts, the promise of pay hasn’t yet materialized. Even in the best of circumstances, with gracious hosts and undemanding guests, tensions will rise once bills pile up.

And lack of payment is only the tip of a very strange iceberg. In 2021, a bill came in front of the Irish legislature expanding the ability of the Irish government to seize private properties in the name of the “public good.”

In retrospect, it seems silly that a group of ornery farmers in the middle of the Plains at one time had the ability to stymie the plans of East and West coast developers. But without the government’s ability to forcefully seize property for the railroad companies, that could have happened.

But of course, the politicians and railroad barons didn’t let it happen, and eminent domain didn’t confine itself to roads and train tracks, either. Today it’s regularly used to bulldoze lower-income neighborhoods in valuable urban areas to put in shopping areas or high-cost homes for rich people.

Britain and Ireland have generally had more stringent property protection, but that’s changing.

And one can’t help but wonder at the timing.

On April 22, Ireland’s Minister for Justice, Helen McEntee, announced that there would be no limit to the number of Ukrainian refugees Ireland would accept. Keep in mind that Ireland is a small island nation with approximately 5.04 million residents. Opening the doors of a little country like Ireland to a refugee population larger than the nation itself seems crazy.

But it gets more concerning.

In McEntee’s announcement that the Irish would not limit the numbers of refugees they would accept, she also said, “. . .Government will avoid, if possible, forcing people or businesses to give up property or open their homes to Ukrainian refugees.”

Pay attention to that “if possible.” The Irish government is not promising anything here.

And she went on to say, “Every option is being explored. . . We want to encourage people to come forwards, not to force anybody to have to give up their property or accommodation.”

Why on earth would the Irish do this to themselves?

And why is this happening to the Ukrainians? I am not unsympathetic to refugees. I’ve known enough of them personally to know that they don’t want to be refugees.

They want to be back at home.

They don’t want to assimilate. They feel like changes have been forced upon them (because they have). They want to return to what they feel is “normal.” If refugees truly cannot return home, every effort should be made to keep them as close to “home,” within cultures as close to their own, as possible. It’s hard to thrive after being traumatized and then culturally uprooted. It’s not impossible. But it’s really, really hard. Host countries cannot just assume it will happen.

So again, why the Irish?

Did the Irish government come up with the idea of seizing property in the name of housing refugees on its own, or are other forces at play? Is this situation rearing its head in Ireland because they have proved so compliant with other global movements since 2020?

Like many other European countries, Ireland ended all Covid mandates in January 2022. The Irish proudly attribute their reopening to their willingness to vaccinate almost the entire country. Ireland happily boasts that, at 93% of the population, they are the most-vaccinated country in Europe. Unlike many other countries, such as the U.S., which needed to rely on a mixture of incentives (lottery tickets, free donuts, etc.) and threatening mandates (“no jab, no job”), Irish citizens readily lined up, without coercion.

In some ways, this is unsurprising. Ireland has been home to many biological and pharmaceutical companies for years, and the sector keeps growing. Twenty years ago, Ireland hosted approximately 50 biopharma companies. As of 2022, they host more than 300. Within Ireland, these companies are trusted institutions.

Their trust is misplaced.

I don’t know how much gets into the Irish press, but I know that in the U.S., enough evidence has accumulated to open the eyes of anyone curious about the pharmaceutical industry. Pfizer bears the unfavorable distinction of being ordered to pay the largest criminal settlement in history. And anyone who wants to really dive deeply into the relationship between Big Pharma and Big Government can buy RFK Jr.’s meticulously researched book, The Real Anthony Fauci.

So, reasonably or not, the Irish have not caused trouble for the central planners over the last two years.

And an awfully big central planner, Klaus Schwab of the World Economic Forum, is now famous for saying, “By 2030, you will own nothing, and you will be happy.” Flooding a small nation with desperate people and then throwing a giant monkey wrench into laws regarding property ownership looks like a big step toward making the citizens of a country “own nothing.”

Could this be some kind of test run, a pilot program?

Five years ago, I would have thought this was crazy. But time keeps proving the conspiracy theorists right, so let’s look at this one a little more closely. In October 2019, the World Economic Forum, the Bill and Melinda Gates Foundation, and various government leaders participated in Event 201, a simulation designed to practice responding to a pandemic. Two months later, we all watched as Covid began spreading.

We lived in managed chaos for the next two years. Not because the disease was particularly deadly (well over 99% of people under 70 who catch it will survive) but because of government actions worldwide.

Many people went along with measures for the first few months simply because Covid was so new. But as time went on, measures seemed more arbitrary.

For example, in my state, we only got a mask mandate after cases had already peaked. Naturally, the rural counties just ignored the mandate, but it was strange going into city areas and seeing masked people when at the same time, we all knew that case numbers were going down.

2020 and 2021 felt like being a pawn in a game played by government officials. But it wasn’t a game. The stress was real. Both funerals I attended during 2021 were not related to Covid but to substance abuse.

Stress on ordinary people worldwide became impossible to ignore, and in 2022, mandates started dropping like flies.

And then, almost immediately, Russia invaded Ukraine, and chaos ensued. Instead of hating anti-vaxxers, now we’re supposed to hate the Russians, and my grocery store is once again half-full, though this time, there is no pretense about things going back to normal any time soon.

This chaos has been orchestrated. Global elites have not hidden the fact that they want individuals in First World countries to dramatically lower their standard of living. All the events of the past two years—the arbitrary rules, the coerced medical interventions, the supply chain disruptions, and most of all, the expansion of government power—these all point to a precipitous decline in quality of life.

The World Economic Forum is quite serious about us “owning nothing.” Events of the past two years have been means to that end.

Forceful seizures of private property have not started in Ireland yet. But the legal framework was laid out last year, and this year, if enough Ukrainians flood the country, the government may have its excuse.

Many of us within alternative media have spent the last two years insisting that we cannot comply our way out of oppression. The Irish tried complying their way out of the Covid crisis, and this may be their reward: to be the guinea pig in the global elites’ next game, simulation, or whatever you want to call it.

Do I think this will happen in the U.S.?

We’ve definitely got our own limitless flood of desperate people crossing the border that the government seems intent on ignoring. I think the migrant crisis is one of many situations being used to destabilize the U.S.

And before I get accused of xenophobia or something like that: I don’t think the migrants at the Southern border are evil, just like I don’t think the Ukrainians plotted an Irish invasion. I think the world is full of desperate people who are being used by a small number of very bad people to create chaos.

We should look at how we are being played off against each other.

We should spend more time questioning why things have gotten so bad in various countries that so many people are willing to take the risks of fleeing.

Yes, Ireland is a small, isolated country with relatively low rates of gun ownership compared to the U.S. But we are all connected and what goes on in the small nations of the world affects us all.

Maybe the best thing to do right now is simply to call attention to these quiet threats and potential abuses.

It’s possible that if enough Irish feel encouraged by the international community, they will gain the confidence to set realistic boundaries for themselves regarding refugee housing and refuse to let their properties be commandeered by the state.

We can’t comply our way out of this.

What do you think?

Do you think Ireland is being used as a testing ground? Do you expect to see personal property taken over from unwilling homeowners in the name of public good? Could you foresee something similar happening in the US if we stay on our current path? Let’s hear your thoughts in the comments.

2 thoughts on “The Organic Prepper Gets It Right”