Over the past few weeks, claiming to respond to what is clearly a minor outbreak of measles, various New York state, county and city authorities have banned primarily Jewish vaccine-free children from public places and have heavily fined some parents for resisting. Below is my contribution to a recent private email exchange among members of the New York Jewish Community concerned with asserting religious conscientious objections to vaccination, where various religious authorities disagree as to what religious law requires.

“Everything comes down to interpretation of the teachings of the religion. If you don’t make representations that your religion opposes vax, then schools would refrain from adjudicating different religious interpretations.
Then it would fall in the lap of the judge or commissioner.  But the same holds. They will not wish to adjudicate the opposing interpretations.  If the statement contains facially reasonable deductions from scripture, it will be accepted and the judges will leave the inside to the squabbling Jews who are concerned.
That was why NY CLS Pub Health §2164(9) was amended in 1989—-to make dispositive solely what the applicant believes on her own terms, and not what different rabbis, ministers, or the Dalai Lama might believe.
This stemmed from Judge Wexler’s 1987 determination that the prior statute had granted preferences solely to religions whose tenets are specifically opposed to vaccination.
That essentially authorized a school, under the aegis of government authority, to judge the correct and valid interpretation of ecclesiastical questions. Wexler concluded that such government adoption of the religious conclusions of, for example, one rabbi over another, had exceeded the Establishment Clause of the First Amendment.  See: Sherr and Levy v. Northport East-Northport Union Free School District, 672 F. Supp. 81 (E.D.N.Y. 1987).” [ Gary Krasner – www.cfic.us/ ]

When vaccine mandates were first imposed decades ago, when there were only a couple vaccines alleged to prevent very serious diseases, the legislatures that imposed the regulation responded to constituent concerns by providing for various exemptions — medical, religious and philosophical. Their successors have now decided to abrogate some or all of those exemptions.  If the government has power to mandate vaccines, it has power to define — or eliminate — any statutory exemptions.  That is what some legislatures across the nation are doing.  It may well be that they are motivated by avarice (Big Pharma pays well) and ignorance (since vaccine pseudo-science is as much valid, science-based “medicine” as blood-letting once was).  That’s one danger of relying on democracy to define human rights.  You may find your conscience and the state’s power brokers at odds.

However, we do not have to rely on statutory grants of exemption from corrupt legislators to defend our conscientious objections to vaccination.

Wars have consequences and one of the consequences of the horrors of World War II was the enshrining of the universal right to Informed Consent in international law, binding on all nations.  I need not recount here the terrible deeds of Nazi and Japanese “doctors.”  History has recorded those hideous experiments for all time.

As a result of the wartime experience, after the International Tribunal in Nuremberg completed its denunciation of the main Nazi war criminals, the United States continued with what are called the Subsequent Nuremberg Trials, under a US Military Tribunal, as Nuremberg was in the US occupation zone.  One of those trials was the infamous Nazi Doctors Trial.

Under the Geneva Conventions, war criminals must be tried under law as it existed at the start of the war. So the United States prosecutors proposed, and the Court accepted, the Nuremberg Code as a restatement of the Law of Informed Consent as it applied to all countries, since those same Conventions say that the law applied must be a law that applies to the victors as well as the prisoners.  By action of the US Government, the Nuremberg Code applies to all of us.  Later pronouncements, such as the Geneva and Helsinki Declarations and the UN Bioethics Declaration repeat the terms of the Code, as does United States IRB statutes.

What does the Code say?

“The voluntary consent of the human subject is absolutely essential. This means that the person involved should have legal capacity to give consent; should be so situated as to be able to exercise free power of choice, without the intervention of any element of force, fraud, deceit, duress, over-reaching, or other ulterior form of constraint or coercion…”

More about the law of Informed Consent here:  http://drrimatruthreports.com/a-brief-for-informed-consent/

US law is clear that you have the right of Informed Consent. As long ago as 1914 Judge Cardozo (later a Supreme Court Justice) held that it was an assault and trespass for a doctor to provide a medical intervention without Informed Consent  — Schloendorff v. Society of New York Hosp.,105 N.E. 92, 93 (N.Y. 1914). And as recently as 2013 the Supreme Court repeated its strong support for Informed Consent — Missouri vs McNeely, 569 US 141 (2013):

Even a “…diminished expectation of privacy does not diminish the… privacy interest in preventing a government agent from piercing the… skin. And though a blood test conducted in a medical setting by trained personnel is less intrusive than other bodily invasions, this Court has never retreated from its recognition that any compelled intrusion into the human body implicates significant, constitutionally protected privacy interests…” (page 15)

Thus, each free person has the absolute right to refuse any medical intervention for reasons of conscience, or for no reason at all.  No legislature has power to restrict the right of Informed Consent.

I’ve written about that here:  http://www.opensourcetruth.com/zero-vax-tolerance-violates-your-rights/

“Laws protecting religious freedom and conscience rights are just empty words on paper if they aren’t enforced. No one should be forced to choose between helping sick people and living by one’s deepest moral or religious convictions, and the new division will help guarantee that victims of unlawful discrimination find justice. For too long, governments big and small have treated conscience claims with hostility instead of protection, but change is coming and it begins here and now.”

You need to start by asserting your refusal to give Informed Consent through a proper Advance Medical Directive:  https://tinyurl.com/AVDcard.

That’s what I think you ought to do. 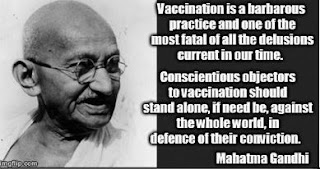 PS — And share this message widely on social media with this link:  http://www.opensourcetruth.com/the-persecution-of-vaccine-conscientious-objectors/