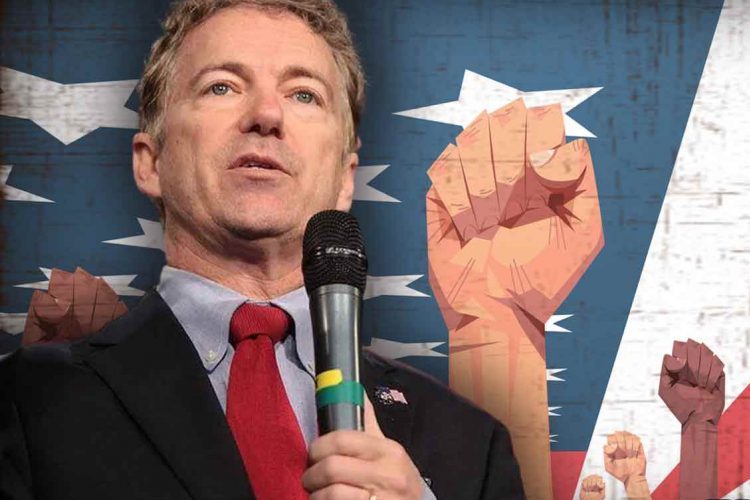 In a rather daring move, Senator Rand Paul released a video this week calling on Americans to resist any further tyranny by the government in regard to COVID-19. In his nearly 4-minute rant, Paul noted that if enough Americans resist the largely ineffective but extraordinarily tyrannical lockdown measures being rolled out again that it would be too much for the “petty tyrants and bureaucrats” to handle — thereby forcing them to drop the measures.

“We are at a moment of truth and a crossroads. Will we allow these people to use fear and propaganda to do further harm to our society, economy, and children? Or will we stand together and say, absolutely not. Not this time. I choose freedom,” Paul wrote in a message along with his video.

“It’s time for us to resist. They can’t arrest all of us,” Paul said in the video. “They can’t keep all of your kids home from school. They can’t keep every government building closed, although I’ve got a long list of ones they might keep closed or ought to keep closed.”

He continued, “We don’t have to accept the mandates, lockdowns, and harmful policies of the petty tyrants and bureaucrats. We can simply say no, not again.”

Paul, who is a practicing ophthalmologist is following in his father Ron Paul’s footsteps and paving the way for a new road to liberty. In his speech, he specifically called out House Speaker Nancy Pelosi — who was known to flout her own lockdown measures — saying, “Nancy Pelosi — you will not arrest or stop me or anyone on my staff from doing our jobs. We have either had COVID, had the vaccine, or been offered the vaccine. We will make our own health choices.”

Paul further declared that “We will not show you a passport, we will not wear a mask, we will not be forced into random screenings and testings so you can continue your drunk-with-power rein over the Capitol.”

Naturally, team doom has resorted to calling Paul a  “sociopath” and have accused him of “mass murder” — though these fear mongers have consistently been proven wrong.

As TFTP has reported, several studies have shown that the lockdowns were not very effective at stopping the virus. In June, we reported on the study from the National Bureau of Economic Research which analyzed data from 44 countries and all 50 states. The study from the NBER found that these restrictions not only failed to save lives, and greatly exacerbated the destruction of the working class — but have in fact resulted in an increase of excess mortality. At the end of the day, they cost more lives than they saved.

Among the findings for the study, the authors conclude —

Also in June, TFTP covered the findings of an MIT scientist who reported a data analysis of the economic impact of the lockdown — noting that whilst it played a key contributing role to the sharp rise of unemployment, it did not make a significant reduction in deaths.

And on June 22, a Harvard University study reiterated the fact that while this policy did not save lives it decimated the economy; while modern robber barons such as Zuckerberg, Gates, and Bezos saw their portfolios expand exponentially. This was yet another report, as TFTP’s Don Via Jr. pointed out, that much like the aforementioned, did not receive national headlines from the corporate media.

To be clear, no one here is claiming that COVID-19 is not serious and you shouldn’t take precautions. However, granting government tyrannical powers in the form of business closures, mandates, vaccine passports, and more lockdowns is most assuredly not the answer. As the data analyses above illustrate, it is difficult to tell the difference between places which had strict lockdowns and mandates verses the ones that did not. In other words, you can’t tyranny your way out of a pandemic.

Given the fact that a DHS alert was issued earlier in the year, targeting those upset over the lockdowns, it is unclear how Paul’s call for resistance will play out. He is right, however, when he points out that they cannot arrest us all. After all, most positive change comes — not in the form of begging politicians for more laws — but when good people choose to disobey bad laws.

Matt Agorist is an honorably discharged veteran of the USMC and former intelligence operator directly tasked by the NSA. This prior experience gives him unique insight into the world of government corruption and the American police state. Agorist has been an independent journalist for over a decade and has been featured on mainstream networks around the world. Agorist is also the Editor at Large at the Free Thought Project. Follow @MattAgorist on Twitter, Steemit, and now on Minds.