Real world data increasingly show that the vaccines being injected into people’s bodies en masse are ineffective in protecting against infection by the coronavirus or against a heavy course of the Covid illness. There is, in fact, data coming from certain places – such as Israel, for example – that seems to indicate that as the virus mutates the vaccines not only fail to confer protection but actually increase one’s chances of falling seriously ill. According to a piece in the World Tribune, “the vast majority of new serious cases of Covid in Israel are vaccinated individuals.” The article goes on to quote the noted author and former New York Times journalist Alex Berenson who observes that the trend among older vaccinated Israeli individuals is “terrible.” Says Berenson:

“It is worth noting that rates of serious illness among the vaccinated are now as high as they were among the unvaccinated only two weeks ago. Perhaps that’s why the Israeli government is now predicting a further quadrupling of new serious cases by the end of August.”

Please contemplate this: this situation is unfolding in a country where 85 percent of people over 30 years of age have been fully vaccinated!

It is quite obvious that many governments are aware of the ineffectiveness of these experimental injections. After all, to know the truth they only need to look at the hard data supplied to them by their own health agencies. And yet they still insist that their citizenry get jabbed with these useless and unsafe substances. A quick look at government sources and databases reveals just how dangerous they really are. According to data obtained from EudraVigilance, which is the European Union’s database recording adverse drug reactions from COVID vaccines, there were more than one and a half million reported injuries – including more than 15,000 deaths – by June 19, 2021. Sadly, many citizens of western nations have been so brainwashed and frightened that they are incapable of believing that their governments would be capable of treating them in such a duplicitous way.

The leadership of the United Kingdom is one example of a supposedly enlightened government whose actions clearly betray the knowledge of vaccinal ineffectiveness. The evidence of this knowledge is glaringly displayed on its own website www.gov.uk. If you go to a section that provides travel guidance for the British people, you will find instructions on what they should do if they happen to come home from any of the so-called red countries, which are countries deemed by the British government to have high incidence of Covid. Those Brits who are unfortunate enough to have set foot in any of these territories in the preceding ten days are ordered to do the following:

This is a mind-bogglingly severe and costly protocol. But what stands out is the following injunction: “You must follow these rules even if you have been fully vaccinated.”

If the British government really believed that the vaccines do their job and protect their recipients, they would not force fully vaccinated individuals to take three tests and undergo ten full days of hard quarantine. If the vaccines worked what would be the point of all of that? The injunction betrays the obvious fact that the UK government does not believe that being fully vaccinated will protect one from contracting Covid-19 and infecting other people. It is highly revealing that the instructions do not differentiate between those who have received their vaccines and those who have not. 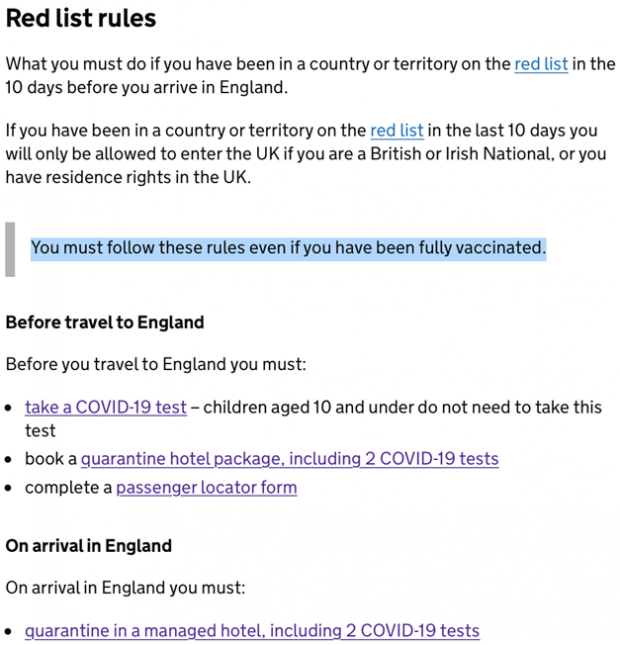 The question is this: given that they obviously do not believe in the efficacy of the vaccines, why does the British government – along with most other western governments – urge their citizens to get vaccinated? Why do they keep compelling their citizenry to accept ineffective injections while exposing them to a whole array of dangerous side effects?

What is the logic behind this?

We, The People, must force our governments to answer this question.

Vasko Kohlmayer was born and grew up in former communist Czechoslovakia. He is the author of The West in Crisis: Civilizations and Their Death Drives.
Source:  www.lewrockwell.com/2021/08/vasko-kohlmayer/travesty-governments-know-the-vaccines-are-ineffective-but-still-force-people-to-take-them/