Millions of naturally immune Americans are poised to become an underclass — underserved, unemployed, excluded from their civil liberties and education, and scoffed at as being “stupid” — unless they conform and get a potentially dangerous vaccination they very likely stand to gain no benefit from. 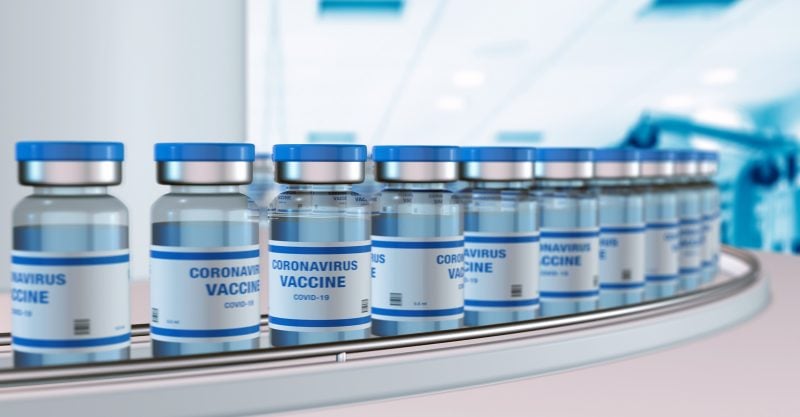 I write here as a physician, immunologist and a verifiable Biden supporter in the 2020 presidential election — but now increasingly shocked by the administration’s mindless and totalitarian willingness to permit the creation of a new American underclass.

Let me explain with as much clarity as I can muster.

The vast majority of these infected U.S. citizens and residents are already naturally immune to COVID-19.

In fact two sizable studies, one from Israel and one from the Cleveland Clinic, have already demonstrated that the naturally immune are protected from re-infection at nearly the same rate as, if not better than, vaccinated persons.

Of course, even without these studies, most reasonable clinicians and immunologists could easily predict that natural COVID-19 immunity is highly likely to be equivalent to, if not more robust than, vaccine immunity. After all, SARS-CoV-2 is actually a simple Coronavirus — it is no HIV, Herpes Virus or HPV!

But despite the serological facts, the science, and now the epidemiological evidence, the Biden administration’s CDC and the FDA are irrationally continuing to recommend a dangerous and indiscriminate vaccination policy for EVERY American — irrespective of prior infections or the actual presence of antibody immunity.

Even worse, the FDA has gone as far as to declare the gold-standard laboratory blood test for assessment of immunity to viruses is uninformative in the case of COVID-19.

That’s right, in a shocking guidance on May 19, FDA declared screening for IgG antibodies against SARS-C0V-2 Spike and Nucleocapsid proteins to be unnecessary, uninformative and misleading. Never mind that these same antibody assays were a major component of the COVID-19 vaccine efficacy trials conducted by Pfizer, Moderna and J&J!

But, perhaps the worst part of the Biden administration’s indiscriminate COVID-19 vaccine policy is that it is unabashedly encouraging private enterprises, corporations and educational institutions across America to discriminate against unvaccinated Americans.

Now, I strongly believe that the fraction of Americans, who have NOT been infected and are thus NOT immune to SARS-CoV-2, but are choosing to avoid vaccination for religious, moral or non-scientific reasons are placing themselves at risk of harm from infection. As a physician and public health policy advocate, I strongly recommend that such persons do undergo vaccination, as soon as possible, to protect themselves and the nation.

BUT, with over 50–100 million Americans now naturally immune from a prior infection, it is nearly certain that most of these persons do not meet the medical ethical criterion of “medical necessity” for being vaccinated — and some of them are actually at risk of being harmed when vaccinated in the setting of a recent infection.

Certainly, requiring vaccination of such already immune persons using our federal government’s machinery, at risk to their civil liberties, employment and educational opportunities is quickly creating an underclass in America.

The Biden administration’s CDC and FDA are essentially telling these naturally immune Americans, who do not stand to gain much, if any, benefit from vaccination and may actually be harmed, the following: “Comply with vaccine requirements imposed by private American enterprises, or accept their discriminatory practices in business transactions, in education and in employment. You’re on your own!”

Make no mistake, fellow citizen, the Biden Administration’s approach to mass vaccination is sending exactly THAT signal to Americans and to American businesses and corporations — and these corporations all fear liability in non-compliance with federal edicts, so they will and are discriminating against our countrymen unabashedly.

Amazingly enough, the Biden administration itself is unlikely to be able to impose these draconian new standards on federal employees, because they will be in direct violation of federal anti-discrimination laws. But President Biden’s government can certainly facilitate unleashing these standards, under the guise of “public health,” on the majority of Americans by private enterprises, whose default is to follow federal guidelines and regulations for fear of liability.

By the time every day Americans muster up the time, energy and economic resources that are required to litigate this problem through the court system, most people give up, or the whole thing will become a moot point. The courts move slowly — people’s lives and livelihoods don’t!

It is jarring to see the Biden administration, the self-proclaimed champion for minority rights, equity, inclusion and non-discrimination, acting in such an anti-scientific and discriminatory way when it comes to millions of naturally immune Americans — a minority subset of whom are almost certainly in harm’s way from unnecessary and potentially dangerous vaccinations in the setting of a prior infection.

Of course, Biden’s CDC and FDA will defend themselves by stating that “we do not know how long natural immunity lasts, so we are erring on the side of caution” OR “the COVID-19 vaccines are safe in recently infected and naturally immune persons.”

But on both counts they will be spreading misinformation or lies.

We may not know exactly how long natural immunity will last. But it is a good scientific and clinical bet that it will last at least as long as vaccine immunity does, if not longer. And certainly, we can and should use antibody screening assays liberally in Americans to determine the status of their antibody immunity, which is the gold-standard measure of immunity to viruses.

The notion that natural immunity will wear off and that vaccine immunity is superior is just a guess as good as yours or mine. Very certainly, the presence of COVID-19 antibodies is indicative of immunity to SARS-CoV-2 — contrary to the FDA’s May 19 “guidance.” The fact that these baseless and flimsy arguments come from a panel of captured FDA “experts” and Dr. Fauci’s cronies means just about NOTHING in reality!

Of course, the idea that vaccines are safe in recently infected and naturally immune Americans is pure hogwash — it’s simply a lie! For starters, if a person does not need a medical treatment, including a vaccine, by definition the door is only open to harm. Secondarily, every self respecting physician and immunologist knows, or should know, that vaccinating recently or concurrently infected people is the recipe for totally avoidable harm — and in some cases, deadly harm. And as I’ve said before, “you really don’t need to go to med school to get that — most every day Americans get what ‘experts’ are not admitting!”

But, in truth, many leading “experts” at FDA and CDC do know better. They know that it is unethical and potentially dangerous to be imposing a vaccine, approved in an expedited fashion under EUA, on Americans who are already naturally immune. So that leaves some of us, physicians and immunologists, wondering why the current crop of “Biden experts” are acting in such a floridly reckless and arrogant way.

The answer is two-fold: 1) they are mindlessly adhering to medical utilitarianism at cost of totally avoidable harm to unsuspecting minority subsets of people and 2) they fundamentally lack respect for Americans, who dispute or are skeptical of their “expert scientific” pronouncements.

Of course, team Biden is allowing this large scale anti-science, mass scale vaccination to be imposed on millions of already naturally immune Americans at political peril to itself. After all, despite the seeming “expert consensus” they are putting up from “captured experts” at FDA and CDC, Americans are not stupid. Many folks who have been infected, or think they may have been infected, are legitimately wondering if they should get vaccinated — and many of them are very hesitant.

It would seem to me in this case, “vaccine hesitancy” is not a sign of stupidity, but rather of intelligence.

But, because workplaces, businesses and educational institutions are requiring vaccination, many such naturally immune Americans, no matter how rationally reluctant, are being pigeon-holed into getting the shots because they need to feed their families and sustain their relationships. And, sadly, many of these previously infected persons are experiencing severe adverse events — and some are being harmed.

FDA and CDC would dispute my latter assertion — but they do so at peril to their own reputations. First, an epidemiological study out of the UK demonstrated that persons with prior infections are 2–3 times more likely to experience an adverse event following vaccination compared to uninfected people.

Additionally, the CDC’s Vaccine Adverse Events Reporting System (VAERS) is grievously defective and does NOT have any reporting requirements placed on doctors — and, to compound the problem, many doctors are reluctant to enter serious post-vaccine illnesses or deaths within the first 2 weeks into VAERS anyway. Their preferred party line answer is that all (or at least most) illnesses and deaths following vaccination are “unrelated to the vaccine.” So most docs do not enter any post-vaccine illnesses and deaths into VAERS unless they are sure it is “causal.”

Here, for the record, I call BULLSHIT! It’s a simple fact that “if you do not look, you do not see!” And WE, in the United States, are NOT looking carefully enough.

FDA and CDC are not equipped to look carefully enough and the vaccine manufacturers are happily going along — VAERS is simply not sensitive enough as a safety surveillance system. And yet, despite its inadequacy, VAERS is still generating a disturbing safety signal that the Biden administration and its minions in the media are ignoring and claiming to be “inconclusive” or “unrelated to the vaccine”… and anyone, including senior U.S. Senators like Sen. Ron Johnson, who might raise an eyebrow are immediately demonized and attacked.

It’s truly tragic to be witnessing President Biden and his administration make this catastrophic public health and political error. Because the millions of naturally infected Americans who are being coerced or misled into undergoing unnecessary or potentially dangerous COVID-19 vaccinations are NOT just Republicans. And when the magnitude of the Biden CDC and FDA’s error and recklessness with indiscriminate delivery of this vaccine to already immune folks, who stand only to be harmed, becomes clear to everyday Americans, as it is becoming, the cost to Biden democrats will certainly be political.

In the meanwhile, millions of naturally immune Americans are poised to become an underclass — underserved, unemployed, excluded from their civil liberties and education and scoffed at as being “stupid,” UNLESS they conform and get an unnecessary or potentially dangerous vaccination they very likely stand to gain no benefit from.

Unfortunately, for the Biden administration and the Democrats, these millions of coerced and misled Americans aren’t just Republicans. They are a large bipartisan and independent group of people, all wondering: “Do I really need this vaccine? Will it benefit me? Can it harm me?”

Biden’s CDC and FDA are floridly ignoring these questions and promoting an incorrect indiscriminate vaccination edict — while the president and his Democrats are allowing millions of Americans’ rights and civil liberties to be trampled on by private American enterprises scared of liability.

YES, THIS is Biden’s America … We are well poised to create an underclass made up of millions of rational non-conformists amongst us — no matter how rational and scientifically based their dissent of authority, they are quickly becoming Biden’s real-life “deplorables” now!

Is this still the United States of America — or are we a Chinese colony now? I wonder.