By MICHELLE THOMPSON FOR DAILYMAIL.COM

A veteran Michigan weatherman was fired for refusing a COVID-19 shot, and said, ‘We are being bludgeoned with fear’ by vaccine pushers.

Karl Bohnak, who was a meteorologist for Gray Television station WLUC-TV, said he was booted after refusing to comply with the company’s vaccine mandates.

His employer requires proof of inoculation from anyone entering its properties, Bohnak said in a lengthy Facebook post.

‘It’s time to wake up to what is occurring here in America and across the world,’ he said. ‘We are being bludgeoned with fear, I believe, in an effort to control us.

‘Eminent doctors, virologists and epidemiologists who post facts contradicting the “official” accepted narrative regarding COVID are being censored; some are losing their jobs… I have the right to choose—we all do. If we do nothing, we will lose that right.’

President Joe Biden earlier this month announced he would use an emergency order to force businesses with 100 or more employees to mandate vaccines or weekly testing. 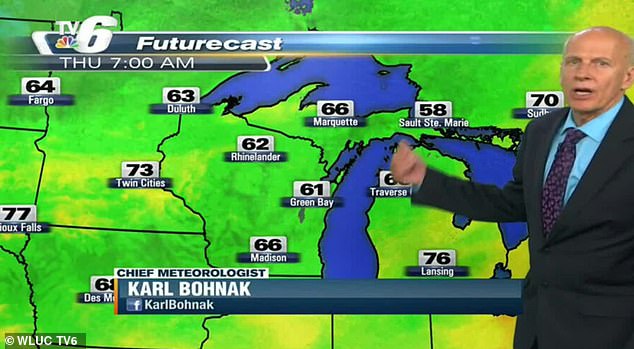 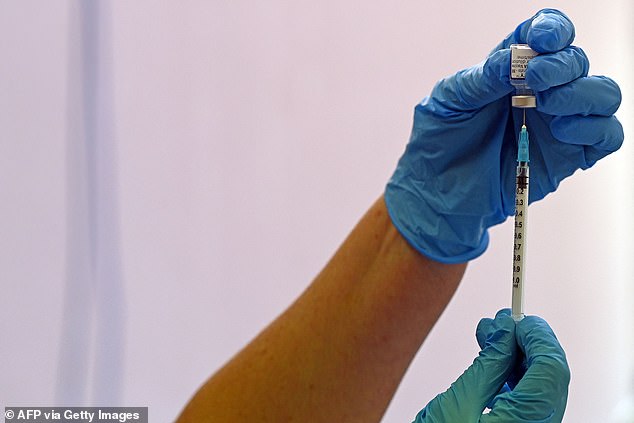 Medical experts say the vaccine reduces serious COVID-19 complications for those who take it.

Bohnak, who has been working for the station since 1988, said he doesn’t believe the vaccine should be forced upon anyone.

‘Many of you have taken one of these injections, and that is absolutely your right,’ he said. ‘It is also my right to choose the medical options I feel are right for me. I have authority over my body.’

He said he might consider getting the jab if he believed it would spare him from life-threatening COVID-19 consequences, but that he doesn’t believe the virus would kill him. 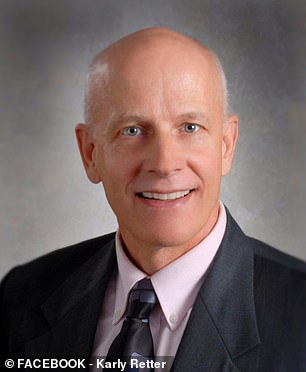 Bohnak has worked for the station since 1988

‘For a normally healthy adult not housed in a nursing home or not suffering from serious comorbidities, the chance of surviving COVID is well over 99 percent,’ Bohnak said of a virus that has killed 674,000 Americans.

‘I will take the chance and go without a shot. I choose not to risk serious side effects.

Though his accounts of record downpours have not drawn much controversy, he is being pelted like a hail storm over his vaccine stance.

‘You’re a selfish idiot,’ Bob Tatus commented on the post. ‘When you get Covid you’ll be singing a different tune. It’s just as much MY right that you don’t infect me.

‘We could beat this effing pandemic if people like you would just quit your whining and get vaxxed.’

Bohnak’s Facebook followers were split with his vaccine reluctance, with some bashing him

Added Mathew Parker Dixon: ‘Dude, you’re an old s***. Someone your age does not have a 99 percent survival rate for Delta.’

Others praised Bohnak for taking a stance against the vaccine, which has received full FDA approval for those aged 12 and older.

‘God bless you for standing up,’ said Cynthia Smith Kraemer. ‘Your God-given immunity is much better.’

‘Thank you for holding the line,’ said Molly Jane Wentzel. ‘So many of us appreciate you for that! This will all come to light soon!’

Bohnak maintained that vaccine mandates are taking away the personal freedoms of Americans. 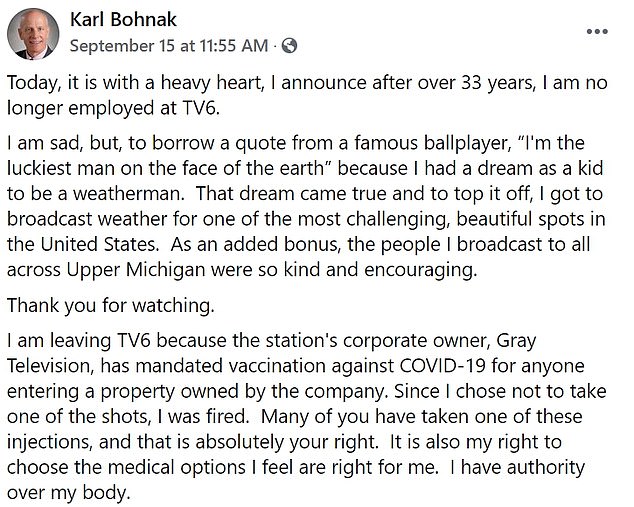 The weatherman says he has ‘authority over my body’ and shouldn’t be forced to be to be inoculated against a virus that has killed 674,000 Americans since it took hold last March

‘The abrogation of our liberty and freedom under the guise of a pandemic is very disturbing to me,’ he said. ‘Hopefully, whether you lean right or left, you are concerned about what has occurred the last year-and-a-half.

‘I just wanted to go about my business, “live and let live”, and keep my mouth shut. But this act by the federal government through corporate America has brought me to a crossroads. Our way of life, our freedom and liberty, is collapsing before our eyes.’

Gray Television said it would not comment on personal matters, but provided Dailymail.com with a copy of its vaccination policy.

Bohnak is the latest television personality to lose their job over vaccine mandates.

ESPN reporter Allison Williams said earlier this month that she will not be working on the sidelines of college football games this season.

She said she refused to comply with the network’s vaccine mandate because she and her husband were trying to conceive their second child.