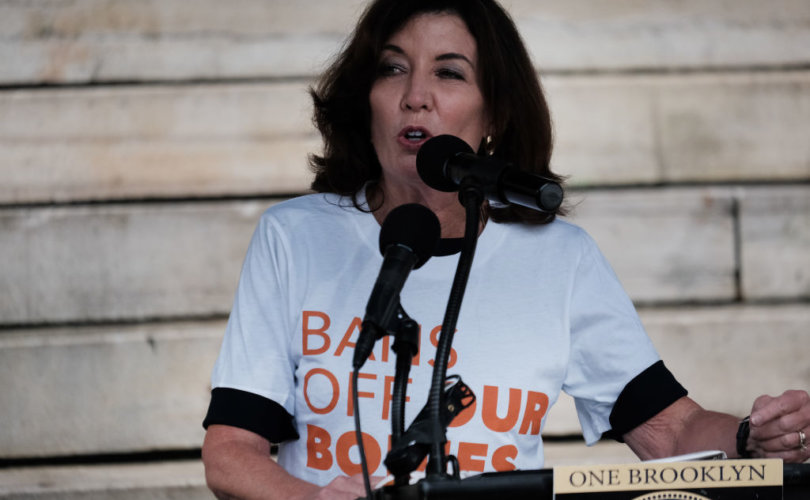 “I need you to be my apostles,” Hochul told church-goers at the Christian Cultural Center in Brooklyn Sept. 26. “I need you to go out and talk about it and say, ‘We owe this to each other. We love each other.”

“Jesus taught us to love one another,” the governor explained, “And how do you show that love, but to care about each other enough to say, ‘Please get vaccinated because I love you. I want you to live.’”

While delivering her message of love and unity, Hochul also said those who’ve gotten the experimental drug are “the smart ones,” and said that those who have refused to get inoculated “aren’t listening to God and what God wants.”

“You know this,” Hochul said. “You know who they are.”

“I prayed a lot to God during this time,” Hochul said, “And you know what? He did answer our prayers. He made the smartest men and women, the scientists, the doctors, the researchers. He made them come up with a vaccine. That is from God to us. And we must say ‘thank you, God.’ Thank you.”

Hochul held up her “vaccinated necklace,” saying she wears it “all the time to say ‘I’m vaccinated.’”

The governor made the comments just a day before New York City’s vaccine mandate for healthcare workers took effect, which is anticipated to trigger a crisis in the availability of needed medical services.

Hochul went on to allege that getting New Yorkers vaccinated will bring the city back to normal and allow the city to focus on the “real issues,” such as confronting “systemic racial injustice.”

An estimated 83,000 unvaccinated healthcare workers are expected to be fired for not getting the shot ahead of the September 27 deadline, with roughly 16% of the total healthcare workforce in the city having opted not to get the experimental drug before the cut-off-date.

Individuals terminated for failure to get the jab will not be eligible for unemployment benefits unless they had first obtained a medical exemption, the state labor department said.

Healthcare facilities in New York state have already been forced to begin trimming services as medical professionals in large numbers have chosen to resign or be fired rather than get jabbed.

A hospital in upstate New York announced it would be forced to stop delivering babies and providing other maternity services after employees announced they were quitting in response to the looming vaccine requirement.

“We are unable to safely staff the [maternity care] service after September 24,” Lewis County Health System CEO Gerald Cayer said during a press conference September 10. “If we can pause the service and now focus on recruiting nurses who are vaccinated, we will be able to re-engage in delivering babies here in Lewis County.”

Nurses and other healthcare professionals have protested the mandates, decrying the fact that those who had been hailed as heroes during the COVID pandemic have now been treated as villains for refusing to get an experimental drug.

“I think the mandate is awful,” said 20-year Thompson Hospital RN Barbara Coleman, according to the Democrat and Chronicle. “Our healthcare system has always run on the premise that each person has autonomy in their own healthcare decisions. We had to respect their choices even if they were not choices that were in their best interest. Suddenly, this is not the case with this vaccine.”

Newark-Wayne Community Hospital RN Keaira Notebaert was among those forced to decide between her job and the jab.

Notebaert said she was worried getting the COVID-19 shot would endanger her pregnancy. Having lost a previous pregnancy, the RN told the Democrat and Chronicle that “[t]he thought of getting the vaccine now is absolutely terrifying”

“I don’t want to take any risks for my baby,” she said.

The vaccine mandate for healthcare workers does not allow for alternatives unless employees can obtain a valid, doctor-approved medical exemption. Employees cannot opt to get antibody testing or otherwise refrain from taking one of the experimental cocktails currently on the market. Merely continuing to wear a mask to prevent the spread of COVID-19 is also out of the question.

Previously, the state had attempted to strip healthcare workers of the option to obtain a religious exemption, but the move was blocked by a federal judge after 17 mostly Catholic healthcare workers filed a religious freedom lawsuit against Hochul, the New York Department of Health, and Attorney General Leticia Jones.

The injunction has subsequently been extended to October 12.

Hochul officially declared a state of emergency Monday ahead of the anticipated mass firings of unvaccinated healthcare professionals, suggesting she might call in “medically trained” National Guard troops to fill in the staffing shortages left by the firing of unvaccinated civilian employees.

While advocating vaccination as a moral duty, Gov. Hochul has also taken aim at Texas’ life-saving Heartbeat Act, which bans most abortions, declaring that abortion will always be protected and easily accessible in the Empire State. According to Hochul, New York’s “Lady Liberty” will be ready to “welcome” Texas women seeking abortions “with open arms.”
Source:  www.lifesitenews.com/news/what-god-wants-ny-gov-calls-for-covid-apostles-to-promote-jab/