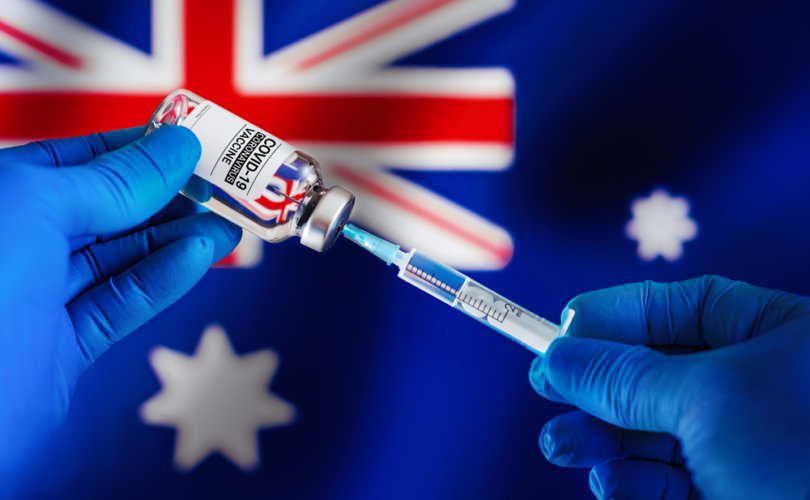 MELBOURNE, Australia (LifeSiteNews) — In a propagandized population, the basic grasp of reality and logic starts to evaporate. That is the situation with the hypnotized Australian population. Over the last two years they have had their lives controlled by those in power, leading to constant anxiety and stress. For many, the best way to psychologically deal with the situation has been to go along with what they are told, even if it means participating in an obvious fiction.

The latest act in this absurd pantomime transpired when the premier of Victoria, Daniel Andrews, recently tested positive for COVID. He assured everyone that his symptoms were only mild: just a bit of a sniffle and a sore throat. He stocked up with Panadol and had a bit of a lie down.

In the propaganda tale spun by the media, however, it was as if Andrews had staved off a deadly virus, allegedly because he had been injected with a vaccine that governments now admit only works for three months, which is why everyone has to get a booster. Up is down; black is white.

The authorities created this deception by instigating a measurement mania, a pandemic of testing. Instead of looking at symptoms – you know, an actual disease – the detection of the presence of a virus was considered enough to cause panic. It was completely misleading. According to the Worldometer (a site that the Australian Bureau of Statistics’ data has shown has exaggerated both case numbers and deaths) over 99 per cent of the people who tested positive over the last two years either had no symptoms or only mild symptoms.

Here is how the logic should work. If you test positive and have no symptoms then, assuming the test is accurate – a brave assumption considering the Therapeutic Goods Administration (TGA) has quietly retired the discredited PCR test, which is no longer considered fit for purpose by either the FDA or the CDC – it must mean your immune system has dealt with the problem. If you have a bit of a sniffle, it means the immune system is taking a little bit longer.

In neither case are you suffering from a deadly disease. Yet the majority of Australians seem unable to think their way through this. It is common to overhear people say they “had COVID three or four times,” even though nothing much happened.

Not all Australian politicians are engaged in the fraudulent medical charade. A noble exception is the Queensland Senator Gerard Rennick, who in a recent speech bravely told the truth. Deploring the destruction of civil liberties, which he described as a “blatant abuse of powers by all levels of government,” he noted the extremely high survival rate from COVID and the fact that the average mortality rate is similar to life expectancy. It has been nothing like the Spanish flu, in other words.

Rennick believes it is a power grab, a way to permanently expand government control. That is why the State governments, which had promised to open up society after vaccination rates exceeded 80 per cent instead doubled down, introducing vaccine mandates and medical discrimination. The Federal government and employers eagerly followed suit.

Rennick ably showed how the Emperor has no clothes. The vaccines don’t work. Instead of giving recipients immunity for a lifetime, which is what usually happens, COVID jabs only last three months. “If they first didn’t work, then try a second, and if the third didn’t work, try a fourth. What’s that definition of insanity again? The COVID-19 vaccines are not fit for purpose.”

Rennick observed that what clinical data there is indicates no difference between the vaccinated and unvaccinated. To mandate such a poor quality medical treatment is an outrage. “No-one has the right to force someone to take a medical procedure, especially one that is ineffective but even more importantly, is dangerous,” he said.

The warning signals are flashing red. The TGA has reported over 110,000 adverse events, which is an understatement because of the many obstacles put in the way of reporting medicos. (One cardiologist tried to log three instances of myocarditis but was rejected by Queensland Health on the grounds that he was not a GP.) Yet even given the under-reporting, the level of adverse events is more than for all drugs combined since 1971. It is putting pressure on the health system; there are only 60,000 hospital beds in Australia.

AHPRA (Australian Health Practitioner Agency), which Rennick describes as “a bunch of unelected bureaucrats, none of whom has any experience in frontline medicine,” are gagging doctors and nurses from writing diagnoses that the injured need. People who have been harmed by a vaccine shot cannot even get exemptions from subsequent jabs because doctors are afraid to write anything down. “How cruel is that?” Rennick asked. “Some people get the exemption but then get the sack anyway.What is going on here?”

What is going on is the prosecution of a massive fiction. A sort of parallel universe in which a premier who gets a bit of a sniffle is thought to have staved off a deadly virus, allowing him to return from death’s door to continue saving the citizenry from a deadly disease that isn’t deadly by forcing on them vaccines that aren’t vaccines.