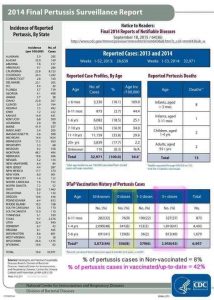 Here is an actual study published by the CDC!

-Number of unvaccinated children who had pertussis = 556

-Number of vaccinated children who had pertussis = 2,950

Obviously, this proves vaccines aren’t as effective as they preach! With a strong immune system, pertussis can be cured naturally. So why inject our children’s bodies with poisons that are only assaulting that immune system? Chemicals do NOT strengthen the immune system. They destroy it! By the time you reach adulthood, with our current dependency on chemicals, there is nothing left of our immune system. This is why cancer no longer has an age. This is why so many live on the dependency of prescriptions. This is why so many are plagued with cancer, ADHD, Autism, lupus, gout, learning disorders, asthma, epilepsy, lime disease, neurological disorders, obesity, diabetes, etc. Need I go on? This chemical assault starts when you baby is minutes old!

Eliminate chemicals and start eating nature based foods that naturally alkalize, hydrate and clean the body.

So a person, I’ll call her Jane, goes to the doctor and gets injected with the acellular pertussis vaccine. It’s not the bacteria itself. Just the toxoid. It’s kind of like getting the snake venom, without the snake.

Jane’s body starts responding creating an “anti-venom” to the toxoid.

A little while later, Jane heads to the store (or where ever), and shakes hands with Joe. Joe has been colonized by pertussis bacteria from somewhere else. The pertussis bacteria jump over to Jane, head to their favorite spot (throat, nose, etc) and start to breed. The body doesn’t fight this colony of pertussis bacteria at first. Because its never seen the actual bacteria before. She gets infected – she’s colonized.

BUT – she shows no symptoms. that toxoid (venom) they start to spew which would have made Jane sick — the body recognizes that! It starts to react and keeps her from getting sick. But her body doesn’t know yet where that toxoid is coming from. It takes it some time to figure it out. About 3 weeks. Once it does realize it’s that bacteria in her throat, nose, etc, it starts to mount a new immune response to attack the bacteria and shut off the source of the toxoid. This process takes about another 3 weeks. So she’s now been infected, and it took 6 weeks for her body to kill off all the bacteria. Meanwhile, she’s contagious.

All the while, she’s still running errands, and says hi to Cathy and her new baby girl, Jenni. Jane thinks she’s done the right thing by getting vaccinated against pertussis, because “she’s protecting Jenni” who is too young to be vaccinated. The bacteria see’s Jenni, jumps ship and heads over to Jenni, making her very sick.

Cathy naturally gets very upset and blames those damn anti-vaxxers for her very sick baby girl who is now in the hospital fighting for her life!

Having gotten the aP vaccine, Jane is also 40 times more susceptible to infection with a different pertussis bacteria, B. para pertussis. Plus the strain of pertussis bacteria, used to make the current aP vaccine, has rapidly evolved since the vaccine was released, and learned to survive by excreting a new, vaccine-resistant toxoid. So she may very well get sick anyways, making her vaccination for pertussis pointless, in addition to being more dangerous because she could also easily become an asymptomatic carrier.

Had Jane gotten the whole cell vaccine, she could have had a nasty side effect (the reason they switched from whole-cell vaccines to acellular- wP had way too many bad reactions). But say she didn’t. Her body sees the whole bacteria cell, though it’s dead, and the toxoid. Her body recognizes that it’s that cell is the Trojan horse that must have carried in the toxoid. It fights both. Jane shakes hands with Joe, live bacteria gets on her, the body recognizes both the cells and their toxoid, and fights them off. Her body clears it in about 3 weeks.

If she hadn’t been vaccinated at all, she would have been colonized, gotten sick, stayed home to get better or sought medical treatment. The doc would have likely prescribed antibiotics, reducing her contagious period to <5 days. Most of that time, ideally, spent away from others. Even with limited exposure to others, that’s way better than being sick, but not knowing it, and walking all around town contagious for 6 weeks! AND with having gotten sick by the actual bacteria, she would have a much longer lasting immunity (30 years) vs 1-3 years with the vaccine, and passed on those antibodies through her placenta and breastmilk to her unborn or newborn children. And she would get natural “boosters” whenever she came into contact with the bacteria again, further prolonging her immunity. This sounds much more appealing to me.