This tragic story of the sudden death of a young Canadian father after he received a COVID-19 vaccine reminds us all why Canadians are protesting COVID-19 mandatory vaccines.

Brandon Watt: widow of 34-year-old Canadian man admits “I was a sheep” before her fully-vaccinated husband dropped dead in front of their baby girls

COBOURG, ONTARIO — It seems every few weeks this blogger prefaces an article with “this may be the saddest one of all.”

We’re going to stop doing that because it’s still only February 2022. These stories are only going to get more tragic as the year goes on. The only positive herein is that the kids may be too young and/or too traumatized to remember what they actually saw that day.

Mr. Brandon Watt and his wife, Chantelle, were together for 12 years, married for 10, according to several Facebook posts. Brandon wasn’t a big social media guy, at least not with public posts. But Chantelle’s timeline provides a glimpse into the family since the so-called pandemic commenced.

She agreed with Ontario provincial government closing all school on March 12, 2020 when, once upon a time, the COVID-19 narrative was “two weeks to flatten the curve.”

Mrs. Watt, like probably 90% of the world at the time, belittled anyone who disagreed with the lockdowns.

She truly believed the “two weeks to flatten the curve” lie.

But the “pandemic” started affecting her life directly a couple months later. Mrs. Watt is an independent photographer. She started getting active in challenging “social distancing” restrictions that harmed her bottom line. Her change.org petition for area photographers garnered nearly 15,000 signatures. 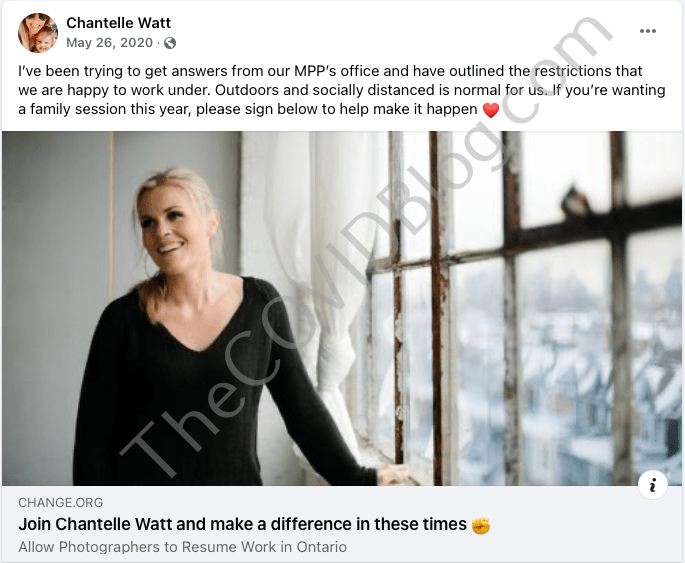 Mrs. Watt, however, was not a fan of masks, particularly for kids in schools.

If Mr. and Mrs. Watt were major vaxx zealots, they either kept it private or deleted it all because the foregoing is the extent of it on Facebook and Instagram. The latter is plausible because Chantelle has only three public posts in 2021 before…

Mr. Watt passed away on November 4 at the age of 34. It’s unclear when exactly he received the injections or which ones he received. But context clues point to the summer of 2021 when Mr. Watt received the shots.

He ran bath water for his two little girls that night, and suddenly collapsed, right in front of them, according to a November 5 Facebook post by Chantelle. “I lay here in bed wondering how I’m supposed to tell our beautiful daughters this morning that they couldn’t fix daddy, and that daddy isn’t coming home,” she wrote. It’s best to simply read it for yourself. 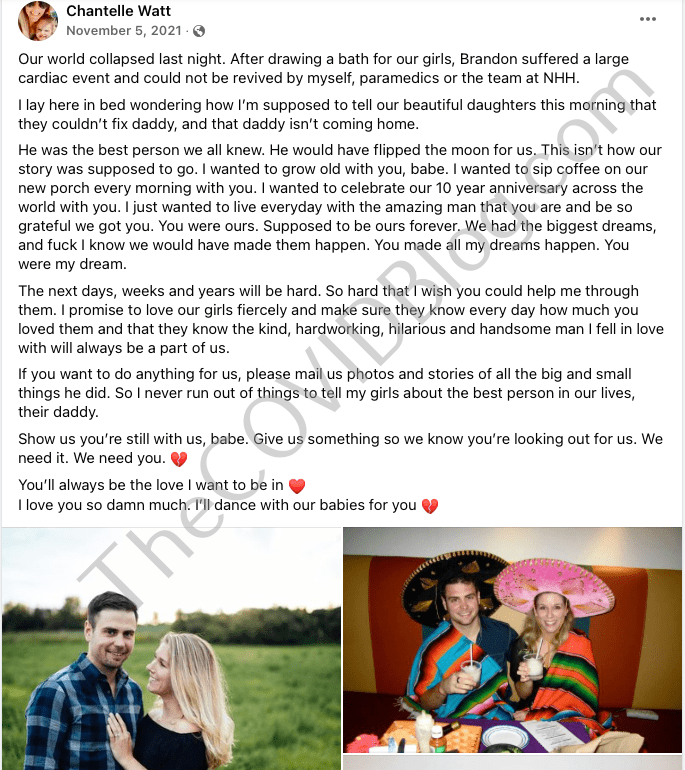 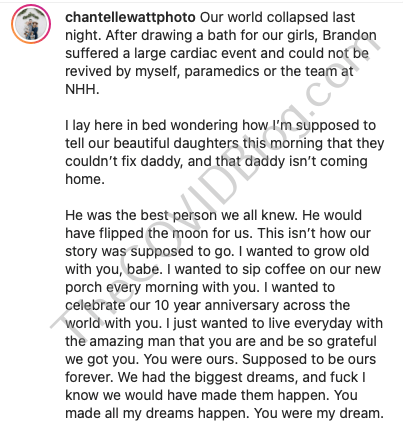 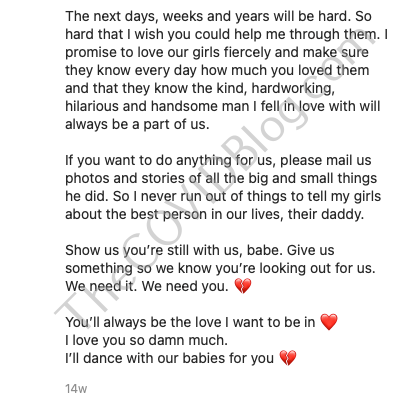 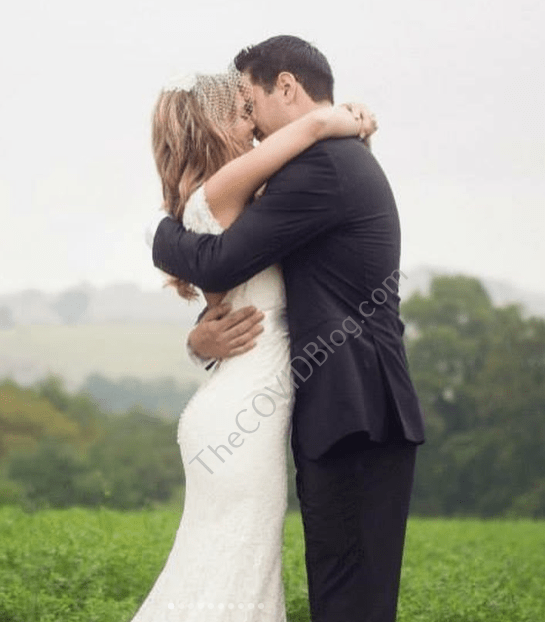 The next three months of Mrs. Watt’s social media are very difficult to read. The couple should have actually have three kids, but lost one in utero. 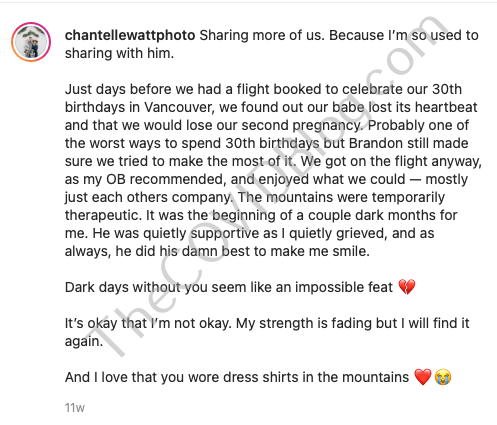 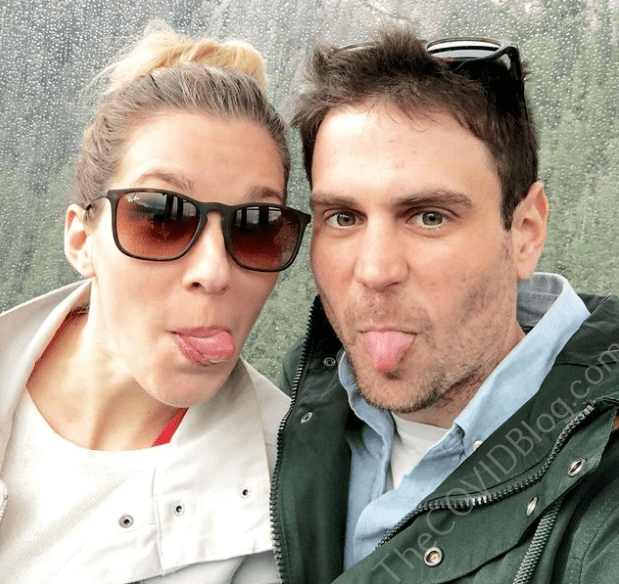 Her November 13 Facebook post, after the funeral, is a reminder just how hard it is to find true love in this world, and how soul-crushing it is when you lose it, particularly in this fashion.

“I’m not sure which pain is worse — the shock of what has happened or the pain of what never will,” she wrote. The family was building a house that they were going to move into within months. 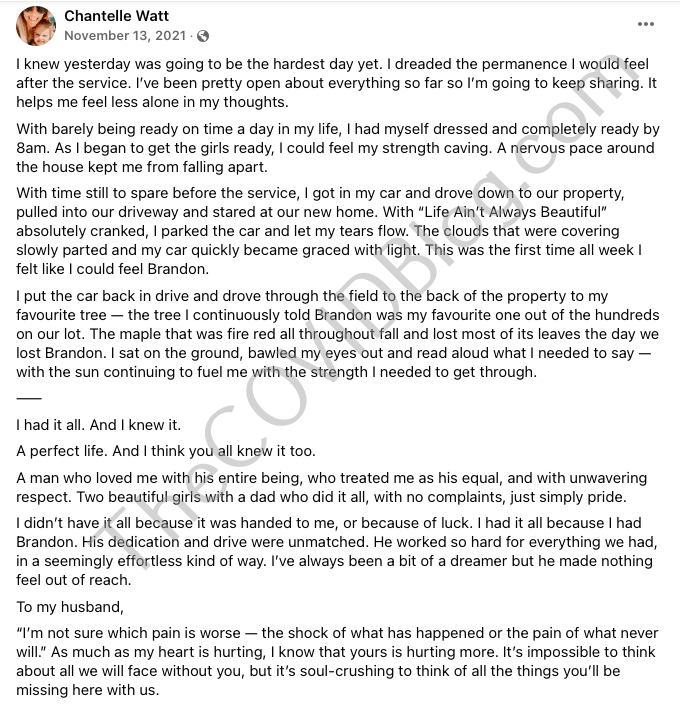 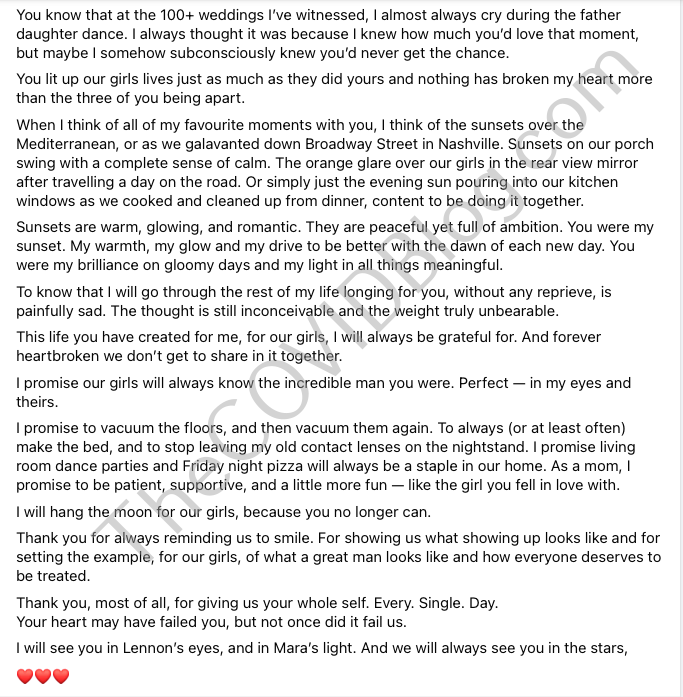 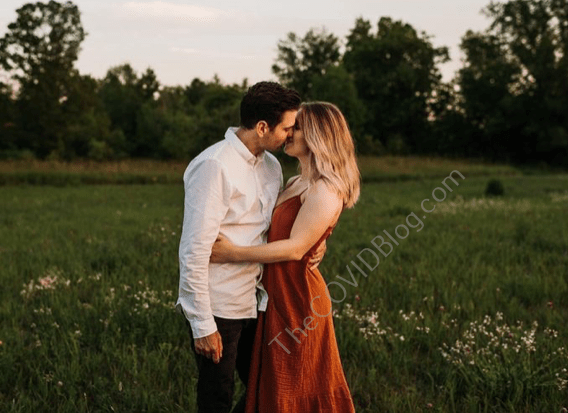 Mrs. Watt posted another update on December 10 about the house and her perpetual pain that is unlikely to go away for many years. 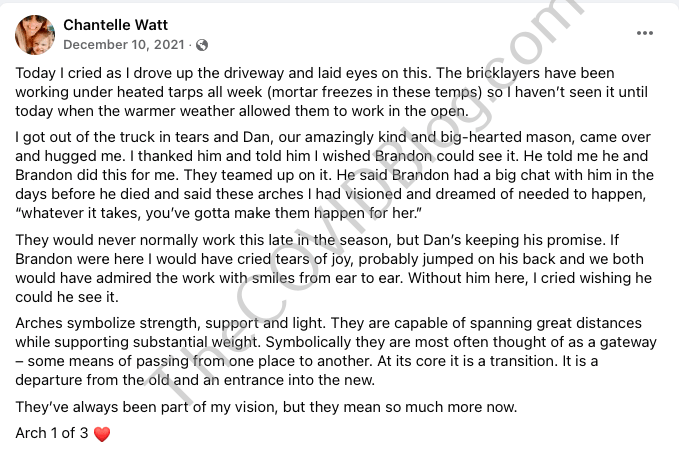 The foregoing was her last public Facebook post until February 2022, almost two months later. But Mrs. Watt updated everyone on Christmas Eve via Instagram. Their community came together and, miraculously, finished building the house enough that Chantelle and the girls could sleep there that night. She and Brandon had made a pact to sleep in the house for Christmas whether it was finished or not. Chantelle fulfilled that wish. 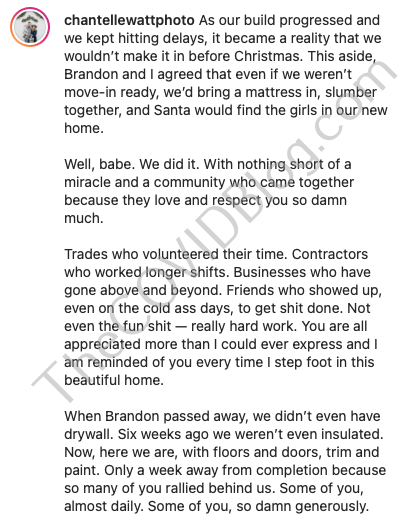 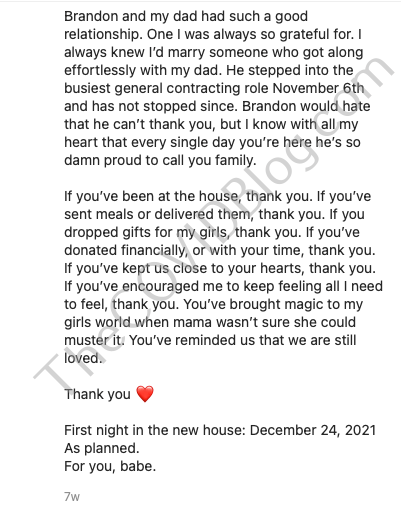 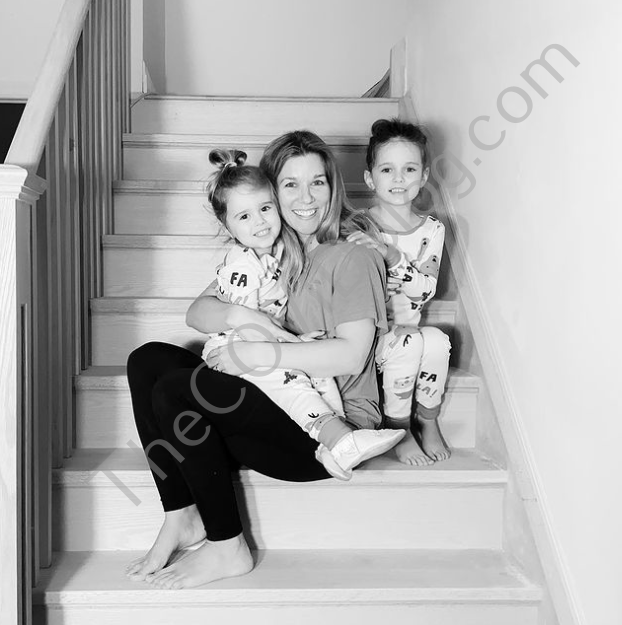 Her February 12 Facebook mea culpa post is admirable and laudable. She once again reiterated the shock and trauma that the girls continue enduring, after watching their dad drop dead right in front of them. The autopsy found that Mr. Watt died of “lymphohistiocytic myocarditis.” It’s so rare that the only medical literature on it is individual case studies, with most of them being since 2021.

One such case was a 62-year-old Uruguay woman who died five days after the Johnson & Johnson viral vector DNA injection. The study found, “a potential relationship between the viral vector COVID-19 vaccine and the patient’s lymphohistiocytic myocarditis resulting in severe biventricular cardiomyopathy and death. Her autopsy showed that her lungs were filled with fluid, her heart had “straw-colored fluid in it,” and there were “numerous sites of thrombotic microangiopathy” (microscopic blood clots).

“His heart was extensively damaged. There was so much scar tissue, that it literally couldn’t pump another beat. I had no chance at reviving him. The official report states that his entire heart was damaged — not one ventricle or one area — top to bottom damaged. Fully attacked, for multiple months. The virus that killed him was likely the mRNA vaccine.”

She continued, acknowledging the truth and trying to come to terms with it.

“Until November 5th, I was a sheep. I fully admit that. Brandon and I both believed strongly in the vaccine and would roll our eyes at protesters, conspiracy theorists and all the “anti-vaxx” posts on social media. November 5th onward, my eyes have been opened.

I owe this to Brandon. To share what I believe killed him. What did kill him. What left his daughters without their daddy.” 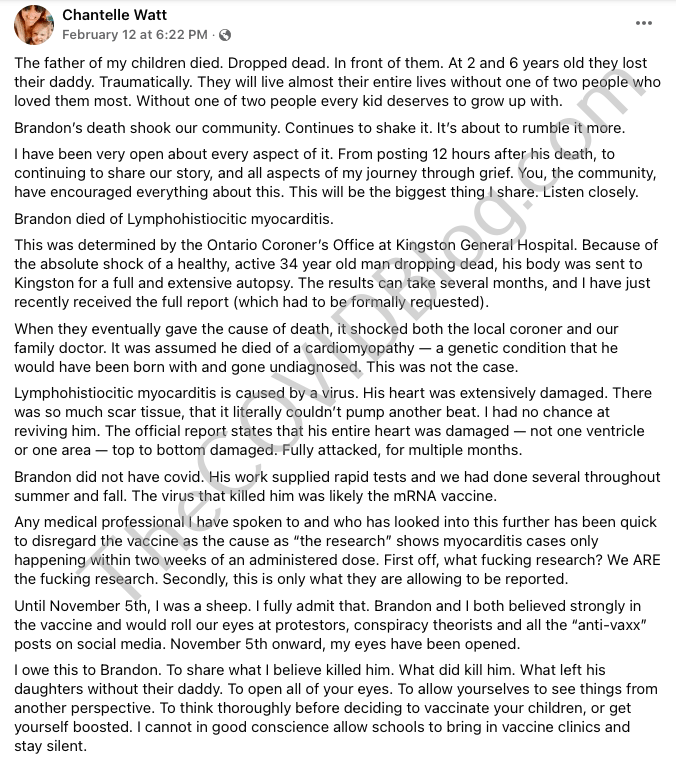 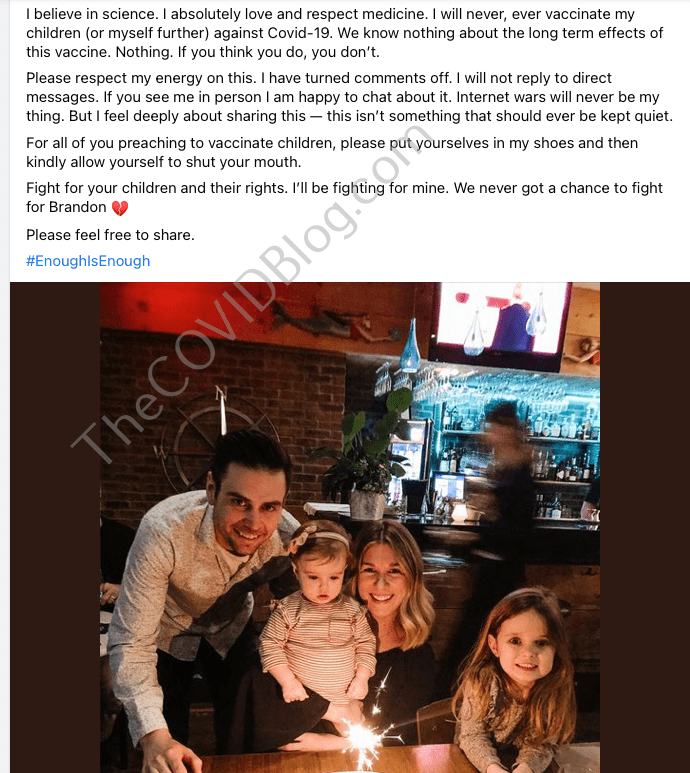 “I chose to share Brandon’s story because I am downright scared for our children and their future. I am scared of what long term affects will come out of the woodwork in the months and years to come, and scared of developmental and fertility issues. Scared of the unknown” 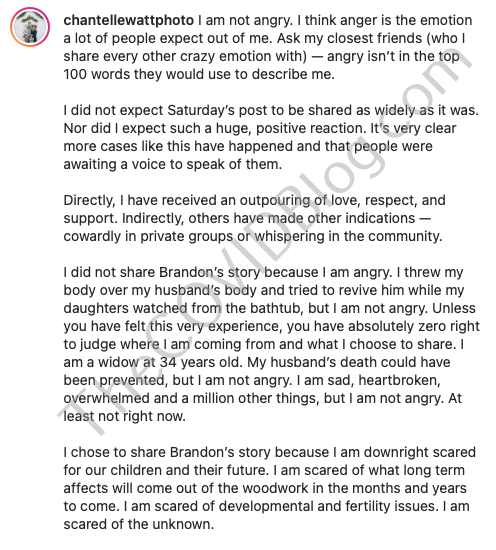 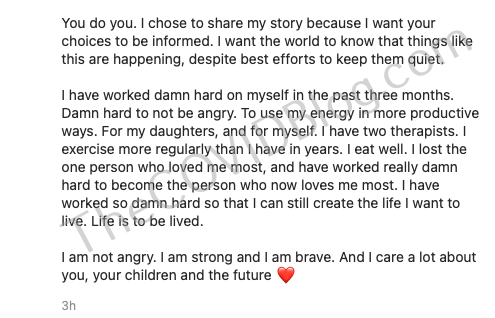 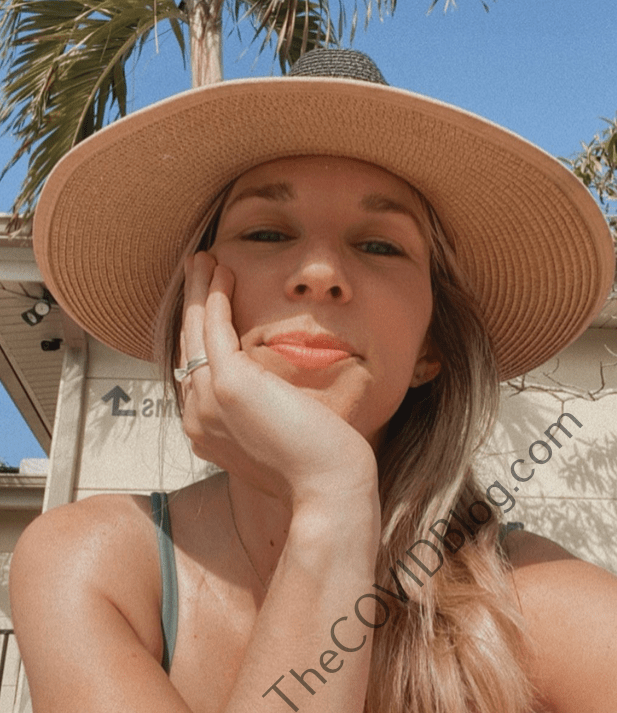